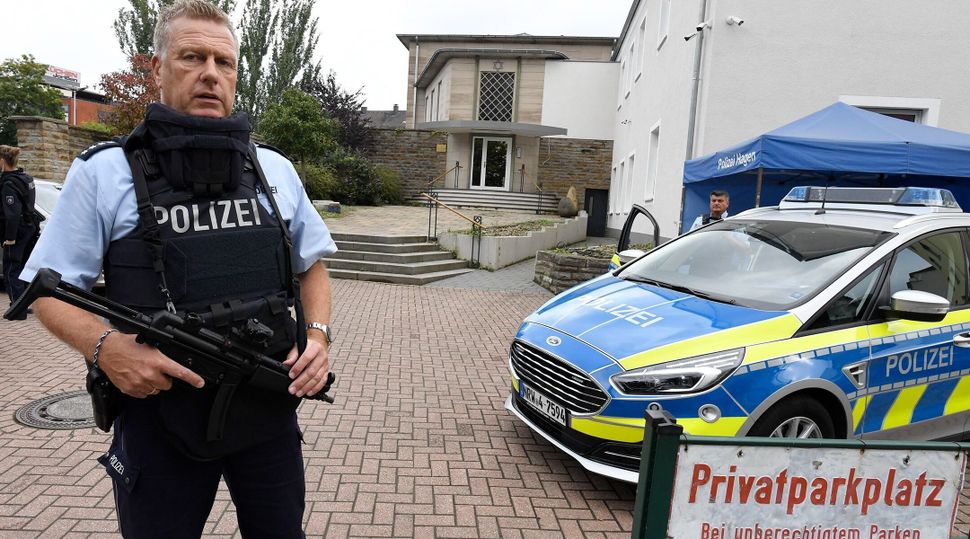 (JTA) — German police said they thwarted a planned Islamist attack on a synagogue in Hagen on Yom Kippur after receiving a tip from an unnamed foreign intelligence service.

Officers took a father of Syrian background and three sons into custody for questioning on Thursday morning, according to the newspaper Die Welt. All but one son — a 16-year-old with ties to Islamists abroad — were released.

The synagogue in Hagen, a city near Dusseldorf in western Germany, was under police protection on Wednesday, and Yom Kippur services were canceled the following day.

Jewish community leaders had not commented as of Thursday.

In a statement, the Central Council of Jews in Germany thanked the security authorities and said the apparent plan to attack a synagogue “on the highest holiday … shows that the increase in security measures at many Jewish institutions was and is necessary.”

Herbert Reul, minister of the interior for the state of North-Rhine Westphalia, told the German media that police had received a concrete tip, including the time and location of the planned attack, and the name of the suspect.

The 16-year-old, a Syrian national, reportedly had made comments on the internet platform Telegram to someone named “Abu Hab” about attacking the synagogue on a Jewish holiday.

Focus magazine reported that the contact had shared bombmaking instructions with the teen. The suspect told investigators that he had not planned such an attack.

While police confiscated phones and hard drives, no bombmaking materials had yet been found. Investigators reportedly are working with terrorism authorities on the case.

The Hagen community had 264 members in 2020, according to Germany’s Jewish communal welfare organization. The synagogue was built in 1960.

On Yom Kippur in 2019, a right-wing extremist tried to shoot his way into the synagogue in Halle. Unable to breach the door, he shot and killed two passersby. The gunman is serving a life sentence.

One year ago, Germany pledged an increase of about $26 million to its Jewish umbrella organization to cover the costs of drastic improvements to the physical security of synagogues and other communal buildings.