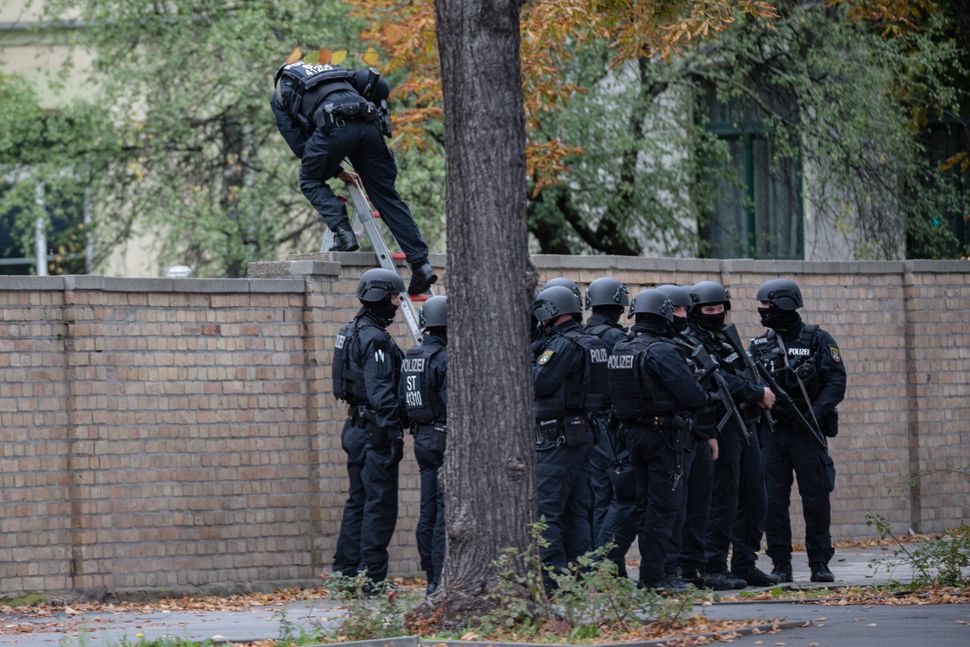 Police entry a Jewish cemetery over a wall near the scene of a shooting that left two people dead on October 9, 2019 in Halle, Germany. Pew Research Center released a report Thursday tracking religious discrimination across the world in 2019. Photo by Getty Images

Jews experience a disproportionate rate of discrimination in countries around the globe, with 89 governments engaging in some kind of harassment against Jews or restrictions on the practice of Judaism, according to a new report from the Pew Research Center.

By this measure, that is the most discrimination faced by any religious group other than Christians and Muslims, despite the fact Jews make up just 0.2% of the world’s population.

The report, based on two indexes of government and social hostility toward religious groups, tracks a broad array of discrimination and countries can be docked for placing restrictions on Judaism even if there is no local Jewish population.

“It includes derogatory statements that are made against Jews so it doesn’t always mean there was an act of physical force against a member of the group,” said Samirah Majumdar, a research associate at Pew and lead author of the study.

But the numbers, which count antisemitic incidents and government laws on the books in 2019, are still stark. Jews faced social harassment from individuals or private groups in 73 countries and government repression in 69, the highest number since Pew began tracking the data in 2007.

The report did not examine the reasons for increases and decreases in discrimination against various religious groups, though it found that the number of countries with severe religious harassment had fallen to its lowest level since 2009 and that religious-related terrorism was at its lowest level ever recorded by Pew. Forty-nine countries had active religious terrorist groups present, compared to 64 in 2018 and a high of 82 in 2014.

Because it is based on data from 2019, the study did not capture the impact of the COVID-19 pandemic on religious discrimination or the impact of this year’s violence in Gaza and Jerusalem on international antisemitism.

The indexes that Pew based its report on were created by analyzing information from over a dozen sources, including the U.S. government, the United Nations and several NGOs.