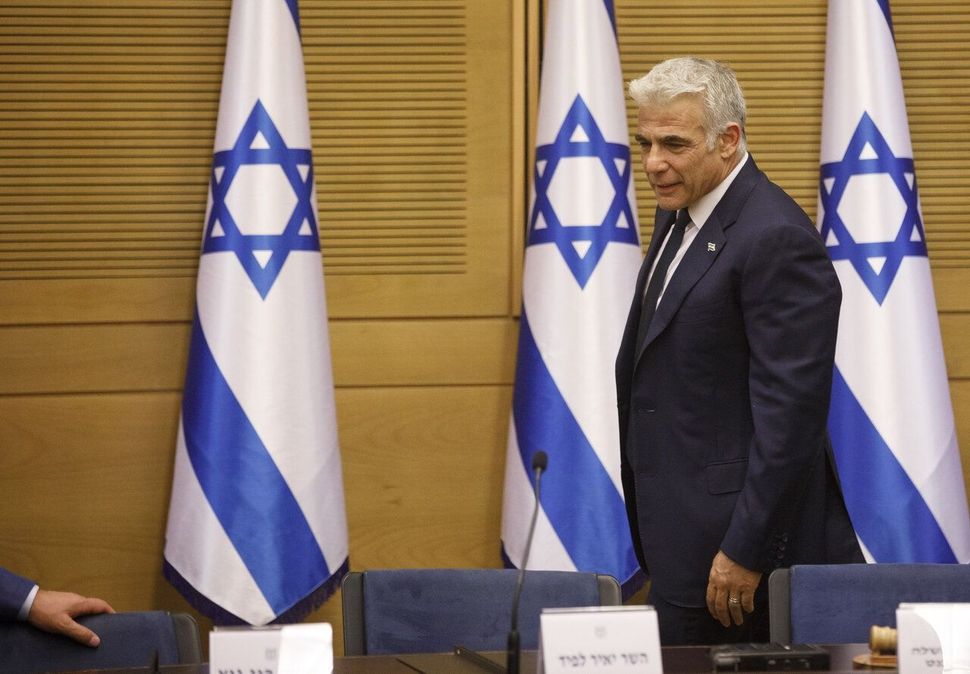 Yair Lapid, Israeli’s foreign minister, arrives for a cabinet meeting at the Knesset in Jerusalem on June 13, 2021. Image by Kobi Wolf/Bloomberg via Getty Images

Yair Lapid, Israel’s foreign minister — and next in line for prime minister — kicked off his first diplomatic trip to Washington, D.C., on Tuesday at a challenging time for relations between the U.S. and his country.

The highlight of the visit will be a meeting with Secretary of State Tony Blinken and United Emirates Foreign Minister Sheikh Abdullah bin Zayed on Wednesday, which will likely focus on several sensitive issues. The Biden administration is preparing for the resumption of nuclear talks with Iran in Vienna. It has made it clear that advancing towards a two-state solution remains a priority. And a recent battle between mainstream and progressive Democrats over an additional $1 billion in funding for the Iron Dome missile defense system underscored the risks of a lack of progress on the Palestinian front.

In his meetings, both with Vice President Kamala Harris at the Eisenhower Executive Office Building and with congressional leaders on Capitol Hill, Israel’s top diplomat spoke of three areas of general agreement upon which bipartisan support for Israel can be strengthened: security for the Jewish state, the pursuit of peace and stopping Iran from acquiring nuclear weapons.

At the Capitol, he told House Speaker Nancy Pelosi that he sees her as “one of the biggest supporters of the concept that says, being pro-Israel is being bipartisan.” 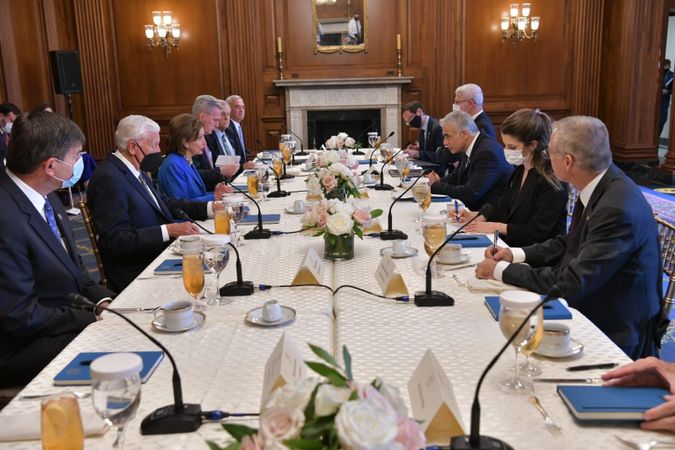 Israeli Prime Minister Naftali Bennett, who met with President Joe Biden in August, didn’t meet with congressional leaders during that trip to Washington due to COVID-19 restrictions and a tight schedule.

Lapid also conveyed in his meetings that Israel’s new coalition government seeks to restore its strong ties with the Democratic Party — an alliance that deteriorated in the 12 years former Prime Minister Benjamin Netanyahu was in power. 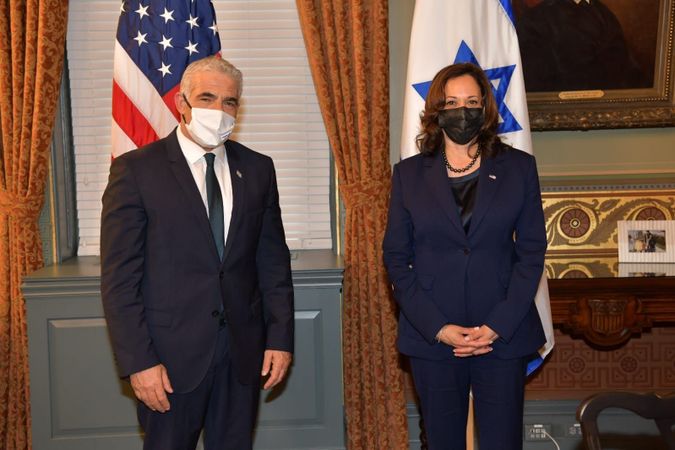 “The dialogue between us is always based on facts,” Lapid said at the start of his meeting with Harris. He added that the visit is also an opportunity to strengthen bipartisan relations with the next generation of young Americans. “This generation is not only preoccupied with wars and conflict, but also with the climate crisis, the global immigration crisis, and questions of identity,” he added.

Harris came under fire earlier this month for failing to correct a student who claimed Israel was carrying out “ethnic genocide” during a visit to Virginia’s George Mason University to discuss voting rights. The vice president’s office later clarified that she “strongly disagrees” with the student’s view. Jewish Democratic groups rushed to Harris’s defense, touting her pro-Israel bona fides.

Harris told Lapid that her meeting with him was an occasion to “reaffirm the strength and the endurance of the relationship between the United States and Israel” and ensure the U.S. commitment to Israel’s security. She added that the Biden administration is also supportive of the Abraham Accords signed under former President Donald Trump.

In a briefing with reporters Tuesday afternoon, a senior State Department official said that Blinken will tell his Israeli counterpart that the normalization agreements with Arab countries are “not a substitute for the two-state solution.”

“We hope that normalization can be leveraged to advance progress on the Israeli-Palestinian track,” said the official, who spoke on condition that his name would be used.

Bennett has said that his government wouldn’t enter peace talks with the Palestinians and would continue expanding settlements in the occupied West Bank, based on natural growth. He has also expressed opposition to the Biden administration’s plan to reopen the U.S. consulate in East Jerusalem to serve Palestinians. Lapid, however, has said he would seek to advance a two-state solution when he takes over the premiership in August 2023.

Following the White House meeting, Lapid hosted a group of leaders and staffers of the Democratic Majority for Israel. The group said Lapid thanked its leadership “for the vitally important work they are doing across the country to ensure support for a strong U.S.-Israel relationship by Democrats.” (Mark Mellman, DMFI’s president and CEO, was Lapid’s chief pollster and campaign advisor.) Lapid told the group he was grateful for the warm reception he received in Washington.

The foreign minister is expected to meet with leaders of the American Israel Public Affairs Committee, Israel’s premier establishment organization in the U.S., on Thursday.

Earlier on Tuesday, Lapid met with Jake Sullivan, the national security advisor. A White House statement summarizing the meeting said Sullivan “emphasized the importance of practical steps to improve the lives of the Palestinians” in the West Bank and Gaza and that the officials agreed that the U.S. and Israel will work closely on Iran and other matters critical to the security of the region.