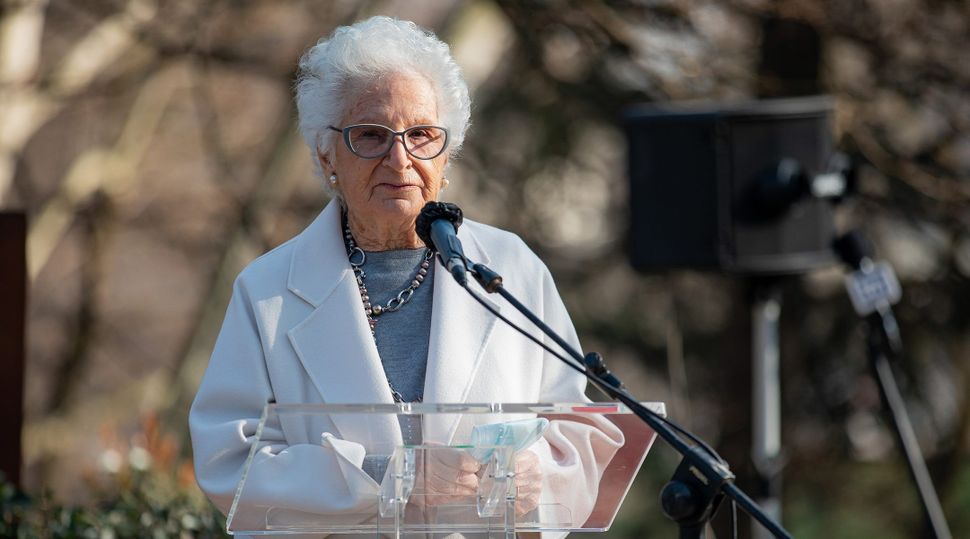 Liliana Segre speaks at a ceremony in Milan, Italy, honoring the rescuers of Jews during the Holocaust, March 5, 2021. (Alessandro Bremec/NurPhoto via Getty Images)

(JTA) — A local politician in Italy apologized for referring to a well-known Holocaust survivor Liliana Segre by her concentration camp tattoo number in a Facebook comment criticizing her support for COVID-19 public health measures.

Fabio Meroni, a member of the city council of Lissone, a suburb of Milan, who represents the far-right Northern League, wrote in a comment on an article about Segre’s public support for the government’s campaign for encouraging people to get vaccinated: “all that was missing [in the vaccine debate] was… 75190.”

He received a torrent of condemnations and apologized in a new post on Saturday.

“I want to apologize to Senator Liliana Segre, it was not my intention in any way to offend you and if one day I will have the honor of being able to speak to you, I will personally explain my thoughts,” he wrote.

The Nazis tattooed the number on Segre’s arm when she 13 at the Auschwitz death camp in occupied Poland. Segre, an outspoken critic of the far right and an activist for preserving the memory of Holocaust victims, was in 2018 made senator for life — a distinction reserved for five notable presidential appointees among the Italian Senate’s 321 lawmakers.

Meroni’s supporters said he did not mean to insult Segre but to point out that the persecution of Jews has parallels with some measures of the government’s policies to contain COVID-19, the Il Cittadino newspaper reported.

Meroni also wrote that he used Segre’s number because Facebook would have censored his remark if he named her.