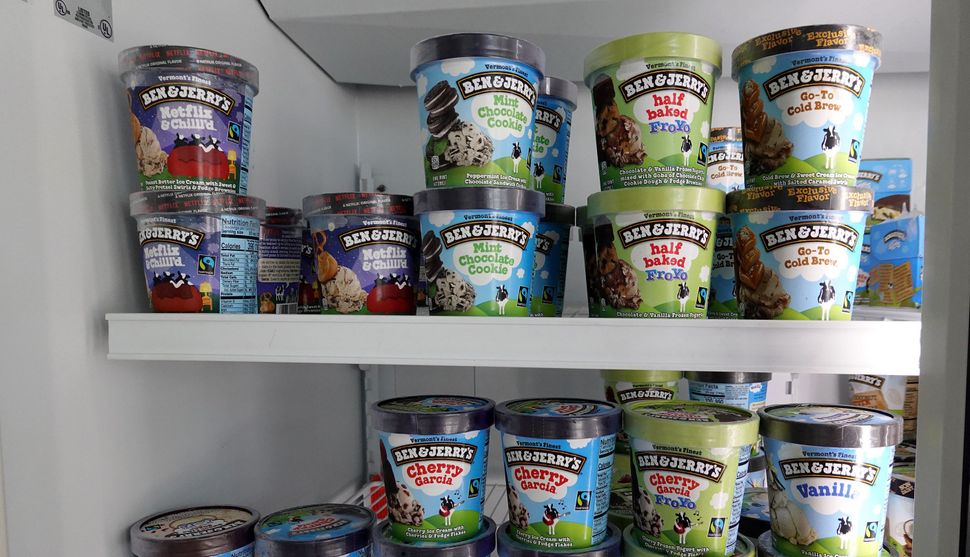 Ice cream is for sale in a Ben & Jerry’s store on September 23, 2021 in Miami, Florida. By Joe Raedle/Getty Images

Twelve state attorneys general have issued a letter to Ben & Jerry’s and its parent company, Unilever, urging them to reverse the ice cream company’s decision to stop selling its products in the Israeli-occupied West Bank.

“Today I was proud to lead a 12-state coalition in calling on Unilever and Ben & Jerry’s to reverse their ill-advised boycott of the State of Israel,” Missouri Attorney General Eric Schmitt, who led the coalition, said on Monday. Ben & Jerry’s has said it hopes to continue doing business in Israel under a different arrangement.

“If Unilever is so interested in virtue-signaling,” Schmitt said, “why not announce a boycott of countries like China, Russia, Pakistan, Saudi Arabia, or especially Iran, who has promised the complete destruction of Israel?”

Today, we led a 12-state coalition in writing a letter to Unilever, urging Ben & Jerry’s to reverse their boycott of the State of Israel.

“Unilever has embarked on an unfortunate and financially misguided path of testing our States’ resolve by refusing to stop Ben & Jerry’s from boycotting selected regions within the State of Israel,” the letter states. “Instead, Unilever has attempted to sidestep responsibility for this action by claiming that a comparatively small subsidiary of your giant global conglomerate is actually calling the shots.”

The letter arrives after a number of states with laws prohibiting public investments in companies involved in the Boycott, Divest and Sanctions movement, or BDS, have already threatened or initiated divestment from Unilever as a result of Ben & Jerry’s July decision to stop sales in the West Bank. New York State moved in October to divest $111 million in investments in Unilever from its pension fund because of the decision, and New Jersey, Florida, Texas and Arizona have also taken steps to divest from the multinational company.

The letter notes that 33 states have enacted laws against public investment in companies that engage in BDS. “The economic consequences of this ill-advised boycott should alone suffice to convince Unilever to reconsider,” it says.

Ben & Jerry’s announced in mid-July that it would not renew a license to sell its products in the West Bank. The decision was “a rejection of Israeli policy, which perpetuates an illegal occupation that is a barrier to peace and violates the basic human rights of the Palestinian people who live under the occupation,” Ben & Jerry’s cofounders Ben Cohen and Jerry Greenfield wrote in a guest essay for The New York Times.

Cohen and Greenfield have refuted the characterization of their action as a “boycott.”

“I think Ben & Jerry’s and Unilever are being characterized as boycotting Israel, which is not the case at all,” Greenfield said in an October interview with Axios. “It’s not boycotting Israel in any way.”

“We hugely support Israel’s right to exist, but we are against a particular policy,” Cohen said.