She loves Jewish literature. He loves her. So he proposed in a Yiddish library. 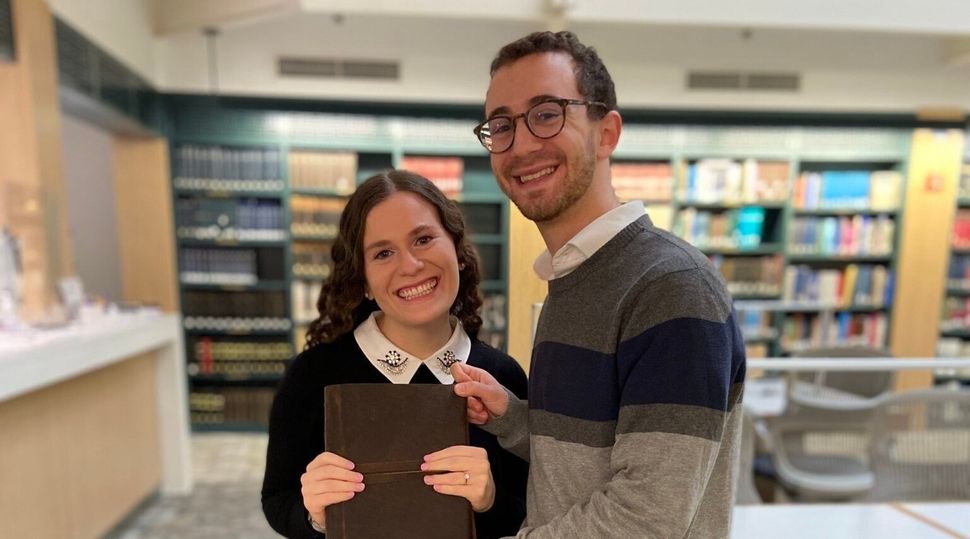 Pammy Brenner and David Frisch got engaged this weekend at the YIVO Institute of Jewish Research in the Center for Jewish History on 15 W. 16th St. (Courtesy)

Click here to read a Yiddish version of this article.

(JTA) — (New York Jewish Week via JTA) — David Frisch, 24, had the perfect plan to propose to his girlfriend, Pammy Brenner, while the two were in New York visiting her family. He would get down on one knee in the Lillian Goldman Reading Room at the Center for Jewish History, where Brenner had been a research fellow from 2018 to 2020.

He just needed to get her to go along with it.

Though Brenner had spent hours upon hours in the center’s Lillian Goldman Reading Room, getting Brenner, 24, to the library on Sunday wasn’t as easy as had Frisch expected. He enlisted the help of one of Brenner’s favorite undergraduate professors at Barnard College, Agi Lugetko, who teaches Yiddish literature.

Lugetko was going to lure Brenner to YIVO’s archives under the guise that new materials had been discovered from Shomer (the pen name of Nahum Meïr Schaikewitz), the obscure Yiddish writer and bitter rival of Sholem Aleichem whom Brenner had been researching.

But Brenner already suspected she would be getting engaged that day, so she kept asking the professor to reschedule. As much as she loved her Yiddish research, she loved Frisch more, she told The New York Jewish Week, and she didn’t want to miss the date they had at Washington Square Park.

“I was sending my professor emails saying ‘I’m 99% sure I’m on my way to get engaged. Can we please meet up literally any other day?’” she said. “And she was forwarding them to David, saying ‘Things are not going to plan.’”

Eventually, Brenner’s sister just put her in an Uber. When Brenner realized she was headed for the Center for Jewish History on West 16th Street — where the YIVO archives are housed — instead of Washington Square Park, Brenner figured Frisch was rearranging the plan so she could check out the documents, and then he would propose later in the day.

When she arrived at the archives, Brenner was told that there was a book waiting for her.

“At first I thought it was the manuscript that I had come there for — but it was actually a scrapbook of the whole history of our relationship,” she said. It was filled with photographs and mementos from their one-year courtship, including their first Hanukkah together as well as their first trip to London.

And there was Frisch, waiting in the reading room with an engagement ring, along with their families. He had convinced the Center for Jewish History to open for the day so they could get engaged.

“I could not do the whole thing in Yiddish,” he explained, “but I learned a couple words I needed to say.” One of Brenner’s goals in her research is to introduce (or reintroduce) Yiddish culture and language to more people, so Frisch wanted to acknowledge that in his proposal to Brenner.

“Yiddish is something that’s been both so important for Jewish history and also within my own family, knowing that my grandparents spoke Yiddish, and that I went to the Yiddish theater as a child and worked as a research fellow at the center,” Brenner said. “I have very fond memories of Yiddish and fond memories of being there.”

“I care about the future of Yiddish,” she added. “I care about Yiddish literature and Yiddish cooking and dancing and all of that. So YIVO and Yiddish institutions in general are a very big part of my life.”

That’s exactly why Frisch decided to propose at YIVO, he said. “I’m not originally from New York, but it’s really important to us that we get engaged in a place that has so many friends and family and a place that would be meaningful for Pammy,” he said. “We both grew up Jewish and want to have Jewish families, so I love the idea of positioning our relationship in all of this context, community and tradition.”

Brenner grew up on the Upper West Side and graduated from Maayanot Yeshiva High School for Girls, an Orthodox school in New Jersey, before studying in Israel and at Barnard. Frisch, who is from Pittsburgh, graduated in 2020 from Duke University.

The couple met last year while pursuing graduate degrees at the University of Oxford in England. Brenner completed a master’s degree in Yiddish studies there earlier this year, then stayed in Oxford with Frisch while he completed the last semester of his own master’s degree, in political theory.

The two are hoping to make their way back to New York when Frisch completes his studies. He plans to pursue a law degree, while Brenner intends to apply for PhD programs in Yiddish.

Doctoral students in Yiddish often spend time at YIVO, one of five archives housed in the Center for Jewish History — the others are the American Jewish Historical Society, the American Sephardi Federation, the Leo Baeck Institute New York and the Yeshiva University Museum. YIVO’s archives, per its web site, focuses on Jewish life and history in Europe; Yiddish language, literature, and folklore; the Holocaust; and the American Jewish immigrant experience.

Jonathan Brent, YIVO’s CEO and executive director, said he was “delighted” by the news that Brenner, who was an Irene Kronhill Pletka YIVO Research Fellow as an undergraduate, had gotten engaged in the building.

“David’s proposal at YIVO shows that YIVO is not just a place for researching the past but a vibrant institution for the next generation, a place for connecting, for discovery and for new life,” Brent said. “Mazal tov!”

As for the scrapbook, Frisch left many extra blank pages at the end.

“Hopefully we will keep adding to it and have it as our own little piece of Jewish history,” Brenner said.

—
The post She loves Jewish literature. He loves her. So he proposed in a Yiddish library. appeared first on Jewish Telegraphic Agency.

She loves Jewish literature. He loves her. So he proposed in a Yiddish library.