Neo-Nazi who mailed threats to Jewish press gets 7 years

A Neo-Nazi leader who led a multi-state plot to intimidate journalists and others who worked to expose antisemitic activity has been sentenced to seven years in federal prison.

A federal jury convicted Kaleb Cole, a leader of Atomwaffen Division based in Washington state, on one count of interfering with freedom of religion, three counts of mailing threatening communications and one count of conspiracy.

Prosecutors presented evidence of flyers designed by Cole that warned recipients “you have been visited by your local Nazis” and contained an image of a hooded figure throwing a Molotov cocktail, which were delivered to homes in January 2020. The recipients were primarily Jews and people of color, prosecutors said. 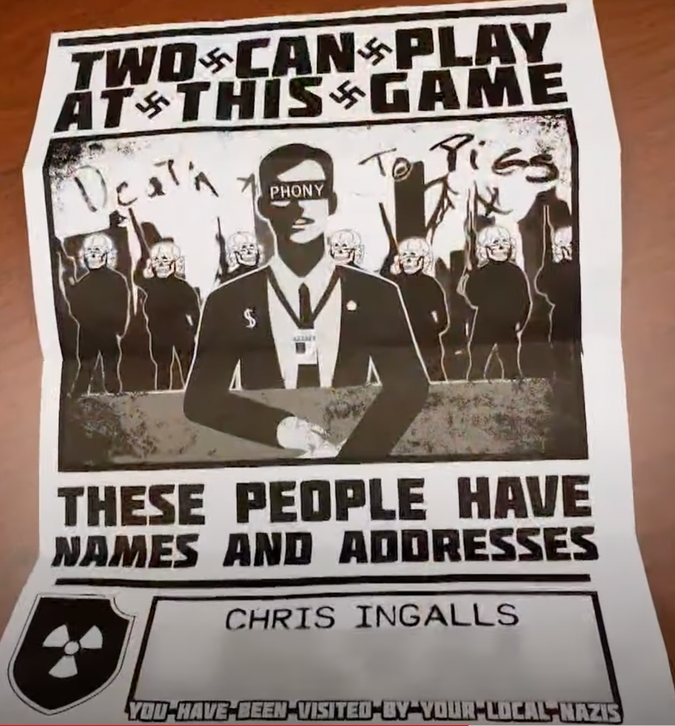 A flyer mailed to the home of Chris Ingalls, a KING 5 Seattle reporter who exposed the Neo-Nazi group Atomwaffen Division in Washington state. Image by Screenshot via YouTube/KING 5 News

In one case, a co-conspirator glued one of Cole’s posters to the home of the editor of an Arizona Jewish publication.

Three co-conspirators were previously convicted and sentenced in the plot.

While he was organizing the distribution of the messages, Cole was also stockpiling weapons, promoting violence, and leading “hate camps,” federal attorneys said.

After those weapons were seized in December 2019 Seattle city attorney Pete Holmes said, “We firmly believe we prevented a massacre.”

Three months later, Cole was arrested for mailing the threats.

“Mr. Cole displayed through his actions that his beliefs were more than just rhetoric,” Donald Voiret, of the FBI’s Seattle field office, said in a statement.

During the trial, victims testified to how the posters had affected them. Some reported installing security cameras outside their homes, or opening their mailboxes with a stick. Others changed addresses entirely. And one journalist said she left the profession out of fear.

The flyers were reported in at least four states, with the FBI’s Joint Terrorism Task Force investigation involving agents in Phoenix, Houston, Tampa and Seattle.

My thoughts after Kaleb Cole was sentenced to federal prison for ugly threats against journalists (including me) and Jewish advocates. Cole will tell you he was prosecuted for his beliefs. The truth is, he’s a criminal:https://t.co/dV0BbUgppa

Members of Atomwaffen Division, also known as the National Socialist Order, have been charged in at least five murders since 2015.

Perhaps its most notorious includes the murder of Blaze Bernstein, a gay Jewish college student who was stabbed to death in Orange County in 2018. His alleged killer, Samuel Woodward, had joined Atomwaffen two years earlier, according to a ProPublica investigation and attended group meetings and received weapons instruction at a three-day training camp led by the group.

Woodward’s trial is scheduled to begin in March.

Neo-Nazi who mailed threats to Jewish press gets 7 years