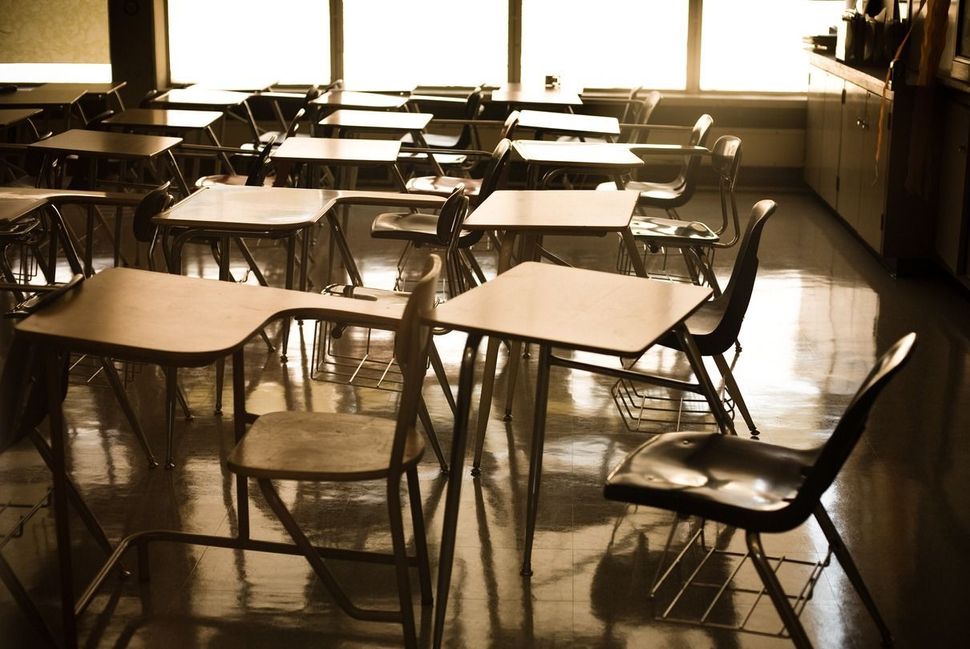 The accused professor says his behavior was meant to parody Nazis, but also admits his actions could have been ‘perceived the wrong way.’ Photo by halbergman/iStockPhoto

A professor at Emerson College in Boston is being investigated after performing a Nazi salute in class last semester.

The accused professor, Brian McNeil, told The Berkeley Beacon, Emerson’s student newspaper, that his behavior was meant to parody Nazis, but also acknowledged how his actions could have been “perceived the wrong way.”

The incident, which was publicized just weeks after a Hillel poster on campus was defaced with antisemitic graffiti, raises questions of intent versus impact, Peggy Shukur, deputy regional director of Anti-Defamation League New England, told The Beacon.

“I appreciate that this professor didn’t intend anything offensive to people, but the impact of using a Nazi symbol on Jewish students and probably many more who have been victims, or who have had family members that were victims of the Nazis — that’s really what we should center here,” she said.

Shukur added: “With all due respect to the role of humor in the classroom, this particular area of Nazis, swastikas, and those sorts of symbols are so deeply serious and impactful to so many communities that we really ask that people be thoughtful before making light of them.”

The event sparked an outcry from Emerson students and, in turn, an investigation after a post on the Instagram account @JewishOnCampus accused McNeil, a visual and media arts professor, of doing “the Hitler salute at me and the other Jews in my class.”

According to McNeil, he first asked students during a quiz review in his History of Photography class whether students knew the German translation of a photography term. “Because it’s all about perception,” he told The Beacon, it was possible a Jewish student “thought that I was singling them out.”

“But I don’t remember doing that.”

Next, McNeil said he raised his hand and “sarcastically imitated a Nazi” to mock the verboten nature of August Sander’s photo series “Face Our Time.” “It was perceived as me making fun of Jews, but I wasn’t,” he said. “I was making fun of Nazis. It was an anti-Nazi, sarcastic moment that I had done.”

McNeil also said “there’s no antisemitic behavior on my part,” noting that his father, a bomber pilot in World War II, “was bombing the hell out of the Nazis” — and that his own wife is Jewish. He is taking a hiatus for at least the spring 2022 semester as the investigation is being conducted.

Sadie Swayze, a Jewish student who witnessed the incident, said it wasn’t the first time that McNeil, who has worked at Emerson since 1997, has “done something that’s this questionable.”

“But this was the first time that it was kind of shocking,” they told The Beacon.

Aaron Baseman, another Jewish visual and media arts major in McNeil’s class, said the incident was taken out of context online, given that it “was surrounded by a hefty amount of very anti-fascist, anti-Hitler context.”

“There are certain elements of him being out of touch and maybe making some lightly impolite remarks, but I would never call them intentionally hateful or discriminatory,” Baseman told The Beacon.

“I don’t think that Brian is a completely malicious, awful person,” they told The Beacon. “He definitely showed his age and the level of ignorance that comes along with being in the older generation — thinking that you can say things and then get away with it.”

The episode at Emerson mirrors the storyline of “The Chair,” a Netflix series released last year in which a professor is investigated after making a Nazi salute in a poor attempt at humor during a class. The show itself may have been inspired by a 2018 incident when a high school math teacher found himself inadvertently in the posture of a “Heil Hitler” salute while trying to demonstrate an obtuse angle.