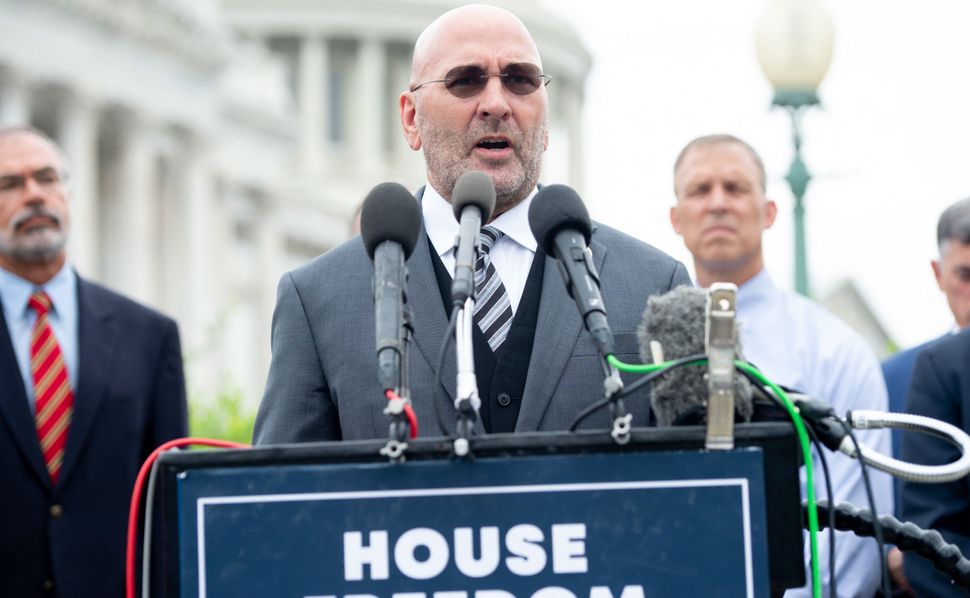 U.S. Representative Clay Higgins, Republican of Louisiana, alongside members of the House Freedom Caucus, speaks during a press conference outside of the U.S. Capitol in August. Photo by Getty Images

Rep. Clay Higgins, a Louisiana Republican, appeared to refer to American Jews as citizens of Israel Tuesday during a hearing in which he also asked a pair of rabbis whose communities had suffered from antisemitism to offer “reassurance” that Jews support law enforcement.

“Your service, your faith, your dedication to communities and congregations is noble,” Higgins told Charlie Cytron-Walker, the Texas rabbi who was held hostage last month, and Yosef Konikov, rabbi of an Orlando Chabad that has been targeted by antisemitic protesters. “And let me say – domestic and international – any act of aggression or violence toward Israel and its citizens must be handled swiftly.”

In earlier remarks, Higgins had referenced “Israel” in a biblical context, where the term is often used to refer to the Jewish people generally.

“The Scripture says the nation that stands against Israel, stands against itself,” Higgins said. “May I say that very simple truth must permeate the homeland security policies and procedures and our determination to maintain law and order within our nation.”

It was unclear what part of Scripture Higgins was referencing. Higgins, a member of the conservative Freedom Caucus, apologized for “unintended pain” in 2017 after he recorded a political video inside a gas chamber at Auschwitz calling for tougher homeland security measures.

In response to detailed questions about his comments from the Forward, Higgins released a brief statement.

His comments Tuesday came during a hearing of a subcommittee of the U.S. House Homeland Security Committee in which Jewish community leaders testified about the need to increase funding for the Nonprofit Security Grant Program, which allows synagogues and other nonprofit institutions to apply for money to install cameras, fencing and other security enhancements.

“Ensuring that our homeland is secure and our Jewish brothers and sisters are safe is vital to our nation’s success and our foreign relations,” Higgins said.

In his only question to the witnesses, he asked the rabbis to confirm that Jews in the United States were loyal to law enforcement.

Cytron-Walker said that he had texted and emailed with Colleyville’s police chief during the hostage standoff but otherwise did not directly answer Higgins. “It really does take all of us, I guess that’s what I want to say,” Cytron-Walker said. “It really takes all of us on all sides of the aisle to come with that sense of curiosity and come with that sense that our status quo is not OK.”