‘I welcomed a terrorist into my congregation’: 5 takeaways from Rabbi Charlie’s testimony to Congress 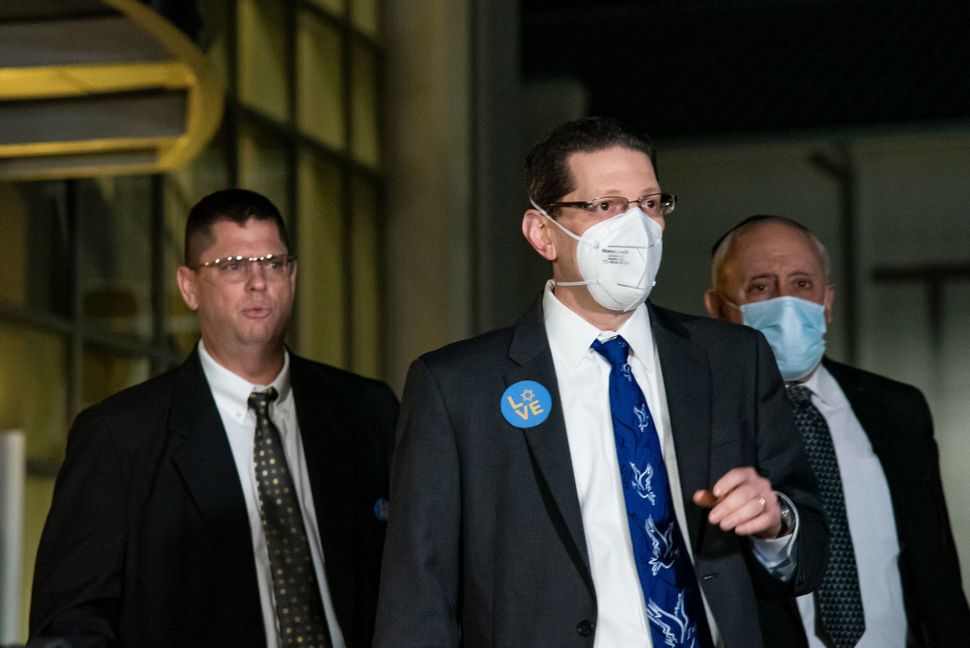 SOUTHLAKE, TX - JANUARY 17: Rabbi Charlie Citron-Walker talks to reporters outside of Whites Chapel United Methodist Church following a special service on January 17, 2022 in Southlake, Texas. The service was arranged after a 44-year-old British national over the weekend stormed into the Congregation Beth Israel synagogue in Colleyville with a gun and held four people hostage for more than 10 hours. (Photo by Emil Lippe/Getty Images) Photo by Getty Images

Less than a month after Rabbi Charlie Cytron-Walker escaped a hostage standoff at his Texas synagogue, he will appear virtually on Capitol Hill Tuesday to champion a federal program that helps vulnerable nonprofits bolster their security. Gratitude is a major theme of his testimony, appearing eight times in a copy of his prepared remarks, which were shared with the Forward before he planned to deliver them.

As he continues to grapple with the hostage crisis, both as the man who ended it and also allowed it to begin, Cytron-Walker shares more details of the harrowing 11-hours he and a handful of congregants who had gathered for Shabbat morning prayers spent at gunpoint, as other members of Colleyville’s Temple Israel tuned in online.

“I was rabbi and tech support; not an uncommon situation. And in the midst of trying to do a million different things, I had a stranger come to the door,” he recalls.

“I have, of course, thought about that moment a great deal. I welcomed a terrorist into my congregation. Four of us could have died and I would have been responsible. I live with that responsibility.”

Here are five takeaways from his testimony.

1. He wants people to focus on violence against all religious communities

Cytron-Walker was known for his interfaith work before the Jan. 15 attack on his congregation in suburban Dallas, and he emphasizes early in his testimony that hate crimes have led to violence at Black and white churches, and Sikh Temples.

“All of us need to feel safe in our sacred space and our communities – and too many people, of every background, don’t always feel safe,” Cytron-Walker writes. “Even though the chances are so remote that violence will be visited upon any one congregation – our recent past has shown that tragedy and trauma can happen.”

While Cytron-Walker and two remaining hostages ultimately escaped from gunman Malik Faisal Akram after the rabbi threw a chair and the trio bolted out an exit door, he said that attending a Faith-Based Security Summit hosted by the FBI, Homeland Security and the local U.S. attorney helped prepare him. After the summit, his congregation formed a security committee and built relationships with the Colleyville police department, so that local officers were familiar with the layout of the synagogue before they were called to respond to the hostage situation.

Cytron-Walker writes that video cameras upgraded with money from the Nonprofit Security Grant Program, administered by Homeland Security, helped law enforcement respond to the hostage crisis. Matthew DeSarno, an FBI special agent, told CBS News last month that video of the standoff was “decent” and “enough to give the decision makers, the negotiators and others general situational awareness.”

Cytron-Walker writes that Congregation Beth Israel only has two paid staffers – himself and a part-time assistant – and that their time is mostly occupied by the daily operations of the synagogue, making it difficult to complete the complex paperwork required to qualify for security grants.

The rabbi asked officials to consider creating an abbreviated “short form” for small organizations, like the IRS does for taxpayers with simple returns, to make it easier to apply for the grants.

5. He had to do too many things at once

Cytron-Walker also grappled with his decision to let Akram into the building on Shabbat. He was trying to get a read on the stranger, but was distracted as he tried to load a Powerpoint presentation for congregants watching online and check Zoom and Facebook Live settings.

“I was running late, but I spent time to see if there were any red flags and I didn’t see any,” Cytron-Walker said. “Of course, I was wrong,”

‘I welcomed a terrorist into my congregation’: 5 takeaways from Rabbi Charlie’s testimony to Congress