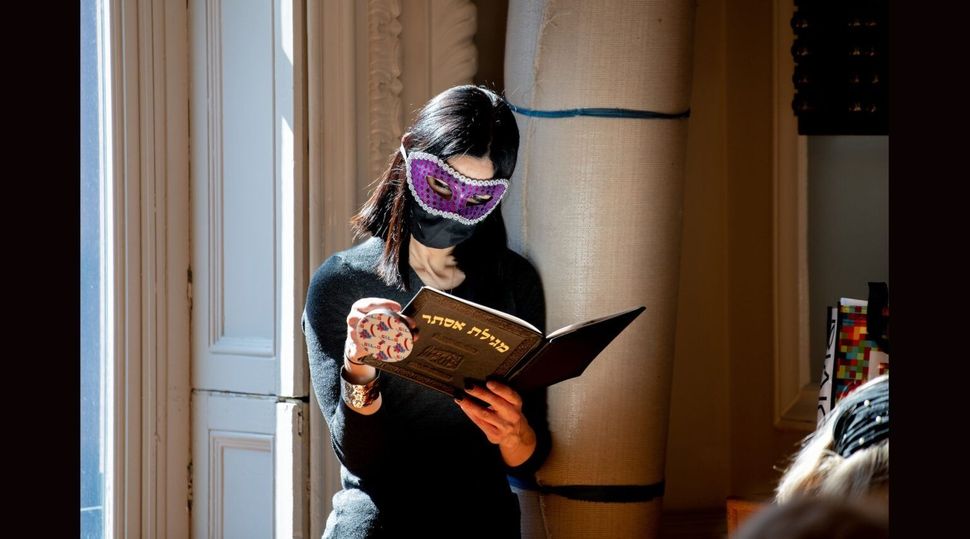 A woman in a mask reads along as a rabbi chants from the Book of Esther, the central text of the Purim holiday. (Roy Rochlin/Getty Images)

(JTA) — A year after photos of Jewish children dressed in blackface during Purim drew widespread condemnation, several leading Jewish groups in the New York area have issued stern guidance in advance of next week’s holiday.

Refrain from using blackface. Don’t choose costumes that appropriate other cultures. And avoid reenacting the hanging of Haman, the holiday’s villain.

“This Purim, let’s ensure that, while celebrating the most joyous Yomtov, we exercise sensitivity towards our community and neighbors,” reads the letter, which uses the Hebrew word for holiday. It says that following the advice is a way of “generating Kiddush Hashem,” a term referring to the sanctification of God by setting a good example for the Jewish people.

The letter was released Wednesday by six groups including several representing Orthodox Jewish communities where Jews live in close proximity to Black and Hispanic communities. The Vaad of Lakewood, New Jersey, where the blackface incident took place, is among them.

The Anti-Defamation League sends a similar letter out annually before Halloween, according to Alexander Rosemberg, the group’s deputy director for New York and New Jersey, but this is the first time that it has produced one for Purim, a festive holiday traditionally celebrated with costume parties.

Typical costumes include characters from the Purim story, a tale of Jewish survival against all odds. But children and adults often wear costumes in homage to, or to ridicule, political or pop culture figures. In 2013, a state assemblyman from Brooklyn apologized for wearing blackface as part of a Purim costume.

The costumes ignited criticism from local Black leaders as well as scorn from around the world, from Jews and non-Jews alike.

The Lakewood school board held a special meeting to discuss the costumes, according to an NBC New York report from March 2021. Meanwhile, Fred Rush, president of the NAACP of Ocean County, which includes Lakewood, told the network that he had said to the family, “This is offensive, and I would hope you would take the time to teach your kids because it’s offensive not only to me but to a lot of people.”

The incident elicited calls for change from people within Orthodox communities. In the Forward last year, Eli Steinberg, a Lakewood resident, wrote that while blackface is not mainstream in his community, its appearance called for efforts to teach Orthodox children and parents about why it is offensive.

“We can explain that just as we are uncomfortable with even one person displaying Nazi paraphernalia, our Black neighbors are rightfully offended when people use race-changing makeup — no matter the intent,” Steinberg wrote. “What is needed for these outliers is education, not condemnation.”

Rosemberg said an effort to educate had yielded the letter, whose signatories also included United Jewish Organizations of Williamsburg and North Brooklyn; Agudath Israel of America; the Vaad of Lakewood; the Borough Park Jewish Community Council, and Oizrim Jewish Council, based in Monsey, a community north of New York City with a large Orthodox population.

“I don’t think that people are purposely trying to offend others when celebrating Purim,” Rosemberg said. “I think it’s more of the oversight — the potential lack of knowledge.”

The letter explains why some costumes and traditions might be experienced as hurtful, such as the hanging of Haman in effigy. In the Book of Esther, the central Purim text, Haman is hanged from a gallows that he had built to execute a Jewish enemy.

“For many years, the KKK and other racist groups, who murdered and lynched minorities, used a noose or a hanging doll to threaten and intimidate,” the letter says. “Our fellow community members and neighbors often do not know Haman’s history and it’s extremely painful and insensitive in their view.”

The groups sent the letter in both Yiddish and English to local Jewish news organizations with the goal of having it appear in community media this weekend. Purim begins Wednesday night.