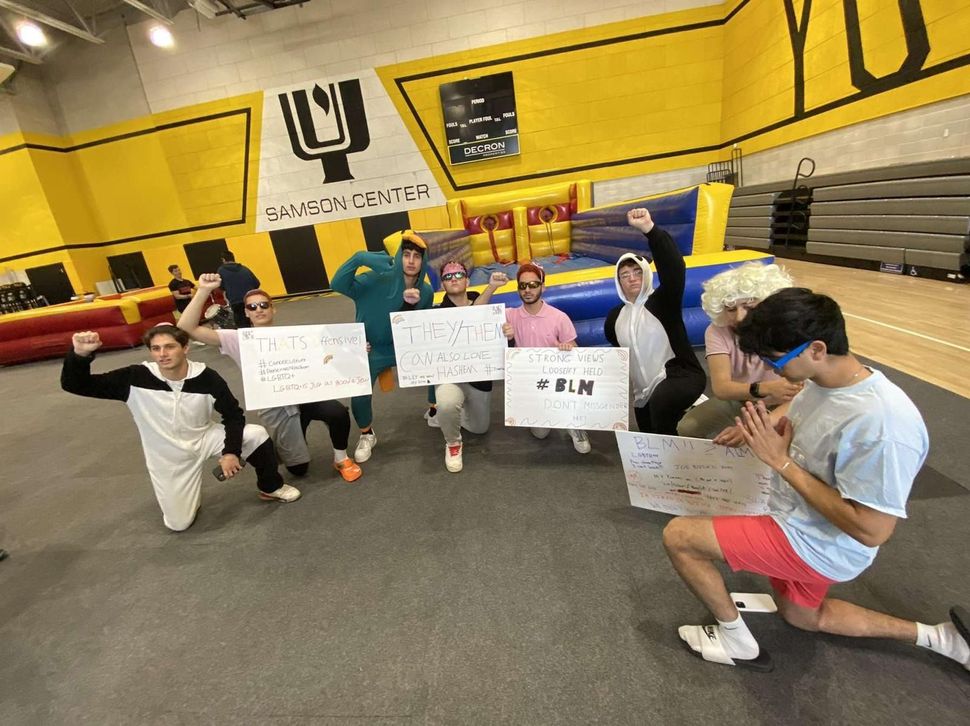 A group of YULA students taking a knee in an apparent mockery of Shalhevet, an Orthodox school that has taken progressive stances on race and gender equality and inclusion. Image by Photo obtained by the Forward

With Purim approaching last week, a number of Jewish organizations collaborated on a flyer that encouraged people to exercise sensitivity in their costumes.

But one Orthodox high school didn’t get the memo.

In a video that circulated on social media Tuesday, boys from Yeshiva University High School of Los Angeles, or YULA, dressed up for a Purim display mocking the crosstown Orthodox school, Shalhevet, for its students’ progressive stances on racial justice and gender and sexual equality, before the rest of the student body.

In the shpiel, which was led by a rabbi on the school’s faculty and took place in the school’s gym, the group held up signs that said “Don’t Misgender Me,” “#BlackLivesMatter,” “#StopAsianHate” and “Free the gays.” Students roared with laughter and jeered as the rabbi, Elchanan Shoff welcomed them to a “town hall” meeting — a fixture of Shalhevet’s student democracy, with “complimentary oat milk.”

The school’s principal, Rabbi Joseph Schreiber, was emceeing the event, though it was unclear whether he could see the posters.

Afterwards, the students posed taking a knee, some with raised fists — seemingly lampooning the symbolic action of Colin Kaepernick and other athletes who have kneeled during the national anthem to protest police violence.

In an email to the YULA community sent that evening, Rabbi Arye Sufrin, who was not present during the event, said the skit constituted a chilul Hashem, or a desecration of God’s name.

“I am deeply saddened to have to write this letter to the YULA community. Today, our pillars, especially that of character development, was compromised by highly inappropriate and insensitive behavior that was unfortunately disguised as a poor attempt at humor,” Sufrin wrote.

“We take pride in the fact that we, at YULA, hold ourselves to the highest standard, but today YULA did not live up to that expectation,” he added. “For that, I am truly sorry.”

The two Orthodox schools, which are a similar size and located about three miles apart, are natural rivals: in admissions, in sports and debate, for top college acceptances and even gym facilities. In recent years, they have become even more similar as Shalhevet moved farther to the right religiously.

But Shalhevet, which unlike YULA is co-ed, remains at the forefront of modern Orthodox Jewish institutions accommodating gender and sexuality. In 2016, it made LGBT inclusion part of official school policy. And Shalhevet has openly wrestled with racial justice issues, in the student newspaper and in forums at the school’s town halls.

The school’s liberalism seemed to be the main target of the signs, which also mocked stances with slogans such as “#LGBTQ+,” “#Pro Choice,” and “#ICantBreathe.”

The video outraged some members of the Orthodox community, though an email response from Shalhevet head of school Rabbi David Block that night took a conciliatory tone.

“I know there’s a video that’s going around re: what’s happening right now at a different school in town,” Block wrote. “Don’t think twice about it. We should be extremely proud of who we are – our values, our conversations/dialogue, and especially our LOVE and support of every single student/Jew/person. Know, without a doubt – and despite what others might want you to believe – that those are TRUE Torah, Jewish values. And, reminder that we don’t respond to grossness with grossness. We’re menches, ALWAYS.” 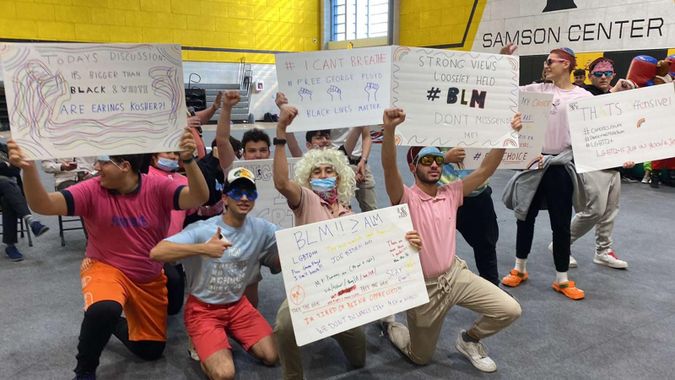 YULA boys students pose with their poster in the school gym. One of the signs says “Free the gays.” Image by Photo obtained by the Forward

If he handed down any consequences for the people involved, Sufrin did not say what they were.

In the same statement, Sufrin said discussing “potential consequences” in public was against school policy but that the school had addressed those involved. He did not address the teacher’s involvement in producing the skit, or the apparent glee of the YULA student body at the mockery.

“We also used the opportunity to have a school wide assembly to clarify that this was a Chillul Hashem – a shameful moment. Our administration and board will be reflecting over the coming days on appropriate next steps and how to move forward to ensure we build a community of growth, unity, and respect for others, regardless of their views.”

Sufrin did not respond to an email inquiring whether Shoff, whose LinkedIn profile says he has been teaching at YULA since 2016, was still employed by the school.

Shoff is also the rabbi of Beis Knesses Los Angeles, an Orthodox synagogue in West Los Angeles, and a professor of Jewish Philosophy and Judaic Studies at Touro College Los Angeles, per Touro’s website, which lists him as Eli Shoff. 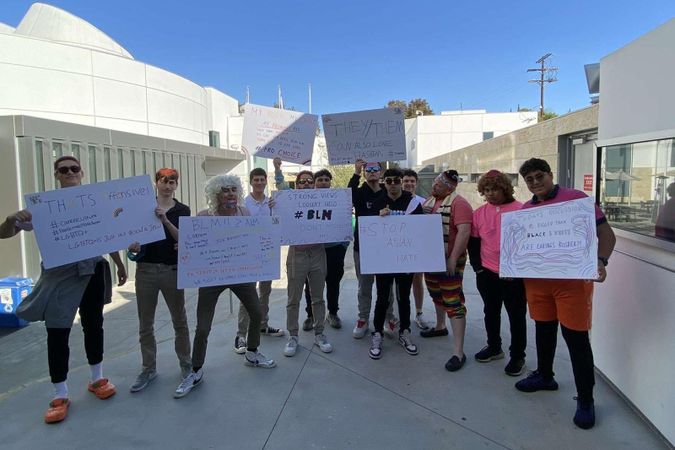 YULA boys pose with their posters, which they created for a Purim skit. Rabbi Elchanan Shoff, who led the group, is third from the right in a tallit katan. Image by Photo obtained by the Forward

Some Orthodox community leaders have been trying to move their flock past a history of offensive Purim costumes.

The flyer, which was put together by the Anti-Defamation League, Agudath Israel of America, the leading organization of Haredi Orthodoxy, and Orthodox organizations from Williamsburg and Borough Park, included explanations of why blackface was offensive and why depictions of hanging — which occurs in the denouement of the Purim story — were hurtful in a country with a history of KKK lynching.

This is fantastically done and a great public service. You love to see it ?? pic.twitter.com/wYW0yBMrSV

“It is also important to choose costumes that avoid stereotypes of any community group,” the poster said. “Remember that our community would also be offended if we were stereotyped should anyone use antisemitic tropes in choosing their costumes during holidays like Halloween.”

Disclosure: The author of this article graduated from Shalhevet High School in 2008.