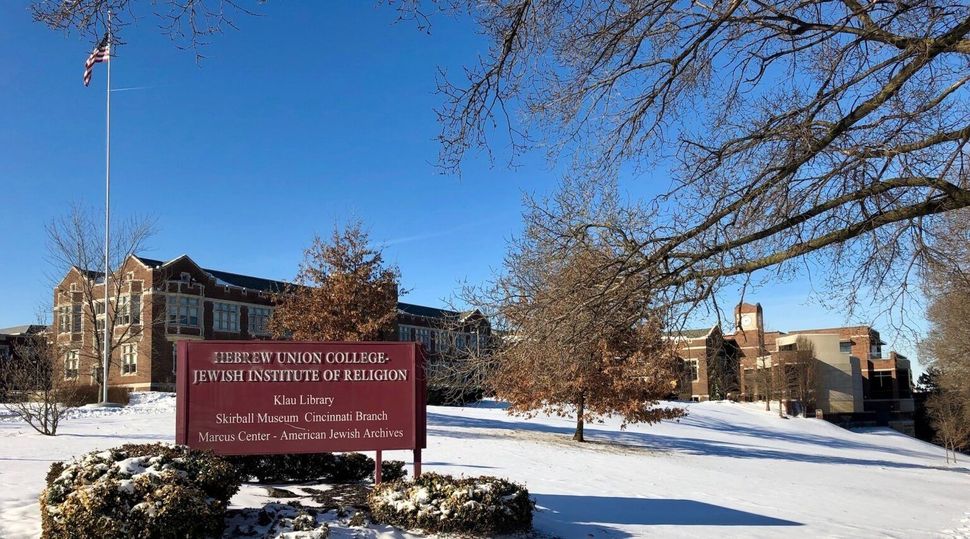 The campus of Hebrew Union College in Cincinnati, Ohio, Jan. 21, 2019. HUC’s board of directors is considering a new proposal to stop admitting rabbinical students to its Cincinnati campus. (Warren LeMay via Creative Commons)

(JTA) — Since 1875, Hebrew Union College in Cincinnati has been minting Reform rabbis — but it may not for much longer.

The board of directors for Reform Judaism’s historic seminary is set to vote next month in New York City on a proposal to stop enrolling rabbinical students in Cincinnati, citing sharply declining enrollment and increased competition from seminaries that are not part of the Reform movement.

Under the proposal, the Cincinnati campus would continue to host the American Jewish Archives, the country’s largest research hub for American Judaism; a library and museum; and, for now, the school’s doctoral program.

But aspiring Reform rabbis would enroll instead at the movement’s seminaries in New York and Los Angeles, where many of them have lately preferred to go anyway. Another set of rabbinical students would enroll in a new program, a mix of online coursework and low-residency workshops in Cincinnati, in an initiative that HUC President Andrew Rehfeld says is essential to preserving the school’s relevance in an increasingly crowded rabbinical school landscape.

“If we’re going to remain a vital and vibrant institution, we have to be sensitive to the choices that our students are making, and not simply our hopes, or what used to be in the past,” Rehfeld told the Jewish Telegraphic Agency.

That past has been a storied one. Cincinnati is the birthplace of the American Reform movement under Rabbi Isaac Mayer Wise, who disdained New York. More than a century after Wise’s death, his adopted city is still regarded as Reform Judaism’s intellectual hub.

But the movement has long struggled with the costs — financial and otherwise — of dividing rabbinical training across three American seminaries. (All students spend their first year at a fourth campus, in Jerusalem.) Three times in the last several decades, HUC’s board has considered restructuring its rabbinical school, and three times opponents within the movement have fended off any changes.

Now, a team of movement leaders has concluded that the time has come to act, driven in part by rapidly declining revenue in the form of dues from Reform congregations. Those dues generated $14 million in 2006 but are expected to top out at $5.4 million a year over the next three years, according to the movement’s calculations.

“We are making this hard call now, rather than waiting until we are forced to make emergency decisions,” Rabbi Andrea Weiss, HUC’s provost, writes in one portion of the proposal.

But even though the movement would retain its Cincinnati footprint, and base its new “low-residency” rabbinical training program there, the proposal is igniting debate among students, graduates and congregations over whether Reform Judaism is turning away from its historic mission.

Hundreds of HUC alumni attended virtual town halls the school held last week and on Sunday to discuss the proposal, where feedback was divided, according to people present on the calls. (The Central Conference of American Rabbis, the professional association for Reform rabbis in the United States, is not taking a formal position on the vote, its chief executive, Rabbi Hara Person, told JTA.)

Many rabbis — including some ordained in Cincinnati — expressed support for the proposal. They spoke of the city’s shrinking prominence as a center of Jewish communal life compared to other Midwestern cities such as Chicago; the difficulty of convincing potential rabbinical students to live in Cincinnati for four years; and the infeasibility of continuing to fund a campus that is attracting so few students.

Others outlined strong opposition — many echoing Wise’s belief that Reform Judaism should embrace the Jews who live and worship in the middle of the country.

The proposal feeds into “the real or perceived biases towards the coastal communities felt by many of us in the Reform movement,” Rabbi Joseph Black, a graduate of HUC’s Cincinnati campus who currently leads Temple Emanuel in Denver, told JTA. Some critics of the proposal are hoping to organize Reform synagogues to oppose it.

Rehfeld rejects such criticism, noting that the current proposal does not go as far as previous ones that did not advance.

“I have no intention, under my watch at HUC, [of] abandoning Cincinnati, or abandoning the middle of the country,” he said, noting that as a former executive director of the Jewish Federation of St. Louis, he has a long track record of supporting Midwestern Jewish communities. “That is why we are looking for ways to leverage this as an opportunity, rather than simply taking the path that others have said — you know, ‘close the campus.’”

The publicly available recommendation, authored by Weiss and Rabbinical School Director Rabbi Dvora Weisberg, represents nearly two years of planning, including hundreds of interviews with HUC faculty, students and alumni. The team found that enrollment had fallen by 60% in Cincinnati over the past 15 years, far outpacing a 37% overall enrollment decline across the three campuses.

Coupled with the Pew Research Center’s recent findings that a growing number of American Jews do not identify with any denomination, the authors concluded, “The total pool of Jews who might consider applying to rabbinical school is only going to decrease in the foreseeable future.”

Meanwhile, they cataloged an explosion in non-denominational seminaries, such as Hebrew College in Boston, and noted that graduates of some of those programs have taken positions in Reform synagogues.

“All the factors that have driven students to come to HUC are no longer as strong as they once were,” Rehfeld said. And because of competition, he added, “We can’t rest on the laurels of confidently saying, ‘Well, anyone that wants a job in the Reform Movement has to come through us.’”

The proposal also cites a recent investigation, commissioned by HUC from the law firm Morgan Lewis, that revealed a decades-long culture of sexual harassment at the rabbinical school.

“In the wake of the release of the Morgan Lewis report, questions have been raised about how the scattering of authority, responsibility, and oversight over our multi-campus structure contributed to the history uncovered by the investigation,” the proposal says, pinning part of the problem on “running multiple residential programs in multiple spaces.”

The proposal team considered other configurations for consolidating rabbinical training but ultimately chose Cincinnati for elimination because of its small enrollment, relatively few opportunities for local internships and the perception that Ohio is not as hospitable for LGBTQ students as New York or California. (Jews of color might also prefer the relative diversity of New York and Los Angeles, people on the virtual town halls said.)

They also cited data showing that graduates of all campuses are working in synagogues across the country, suggesting that Midwestern and Southern congregations will still be able to hire rabbis from among those ordained in New York and Los Angeles.

Current students of the Cincinnati campus say that if the proposal is approved, future Reform rabbis will miss out on opportunities that cannot be replicated on the coasts.

Madeline Budman and Aaron Torop, married third-year rabbinical students, were sent to Cincinnati despite preferring both New York and Los Angeles. (The school stopped assigning students to campuses against their preferences in 2020.) After being disappointed at the time, they quickly realized that training in Cincinnati has its advantages.

They love the lower cost of living, while classmates in New York work multiple jobs to afford school; the intellectual stimulation of taking classes with graduate students; and the campus’s focus on fieldwork and student pulpits — having its students serve rural communities where they would often be the only rabbis at their synagogue. Budman has been serving a small congregation in Marion, Ohio, while Torop works with one in Lafayette, Louisiana.

Torop, whose mother, Rabbi Betsy Torop, was also ordained in Cincinnati and currently works for the Central Conference of American Rabbis, believes that more could have been done to avert the worrying trends HUC administrators say they are trying to address with the proposal.

“They’re saying because there are not enough students here, now we’re going to close the program,” Torop said. “But they haven’t invested in trying to get more students in the door.”

“I’m so deeply disappointed in how the leadership is approaching this,” Budman said. “Maybe make a better program, and then it’ll make HUC more competitive.”

The authors of the consolidation proposal have a vision for what such a program could look like. They are urging HUC to launch a program that caters to the needs of potential rabbis who may not want to or be able to uproot themselves for five years and take on potentially tens of thousands of dollars of debt. HUC’s rabbinical school tuition this year is $27,000.

Such a program would combine online courses, real-world training in local synagogues and travel for short periods to Cincinnati, where students would be taught by professors from across the campuses, according to the proposal.

“This would enable us to welcome more students who are called to the sacred work of the rabbinate but unable to geographically relocate to a campus city, while also expanding the number of communities served by rabbinical and cantorial student leadership,” the proposal says.

The consolidation proposal requires two-thirds of HUC’s board to support it. The board, made up of leaders from across the movement, meets April 10 and 11 in New York.

Whatever happens during that meeting, it’s clear that conditions are evolving for the Reform movement and its training of rabbis.

“HUC was founded when it was, how it was, and where it was because of particular historical dynamics, and those have undeniably changed,” said Shari Rabin, a historian of American Jewry at Oberlin College. “I certainly don’t envy those in charge of making this decision.”

She added, “That being said, I would personally be sad to see the role of Cincinnati diminished. It has a rich history and even if its Jewish population is relatively small, it is a powerful reminder of the importance of places outside of coastal cities, where large numbers of American Jews live and flourish.”

—
The post Hebrew Union College could shutter its Cincinnati seminary where it has trained Reform rabbis for 147 years appeared first on Jewish Telegraphic Agency.