More Orban or a party with a neo-Nazi record? Hungary’s Jews don’t like their choices in this week’s election. 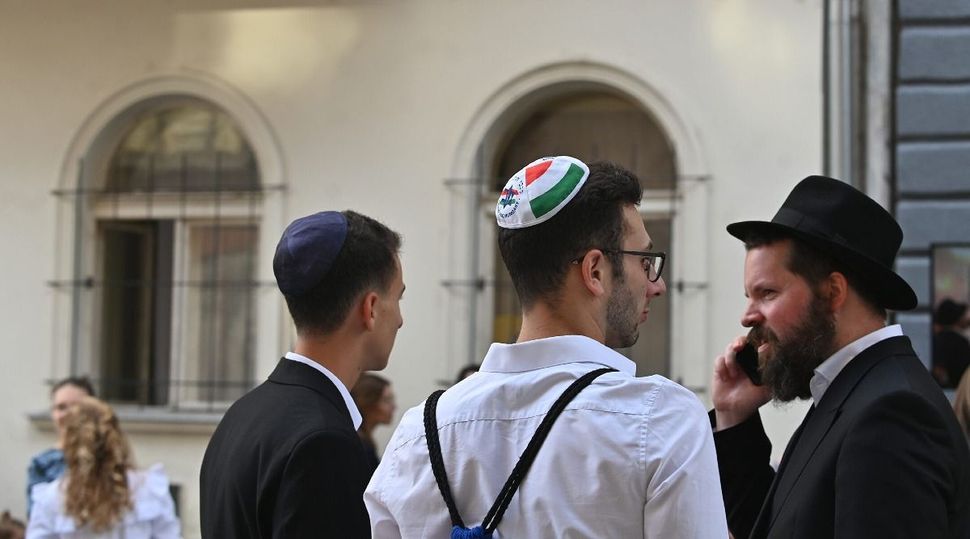 Hungarian Jews celebrate the opening of a new synagogue in Budapest on Aug. 27, 2021. Photo by Cnaan Liphshiz

(JTA) — Hungary is nearing one of the most dramatic general elections in its history, so Peter Pretz has given some serious consideration to how he’s going to vote on April 3.

The 64-year-old Jewish father of five from Budapest has finally reached a decision: He’s voting for the Two Tailed Dog Party, which was created in 2006 as a parody, with campaign promises of free beer and eternal life.

“I’d rather vote for a real party,” said Pretz, who said he takes “the right to vote very seriously” because he grew up under communism. “But for the first time, I’m left without a choice.”

This sentiment, which many Hungarian Jews seem to share, is the result of a new political reality in Hungary.

The right-wing populist government of Prime Minister Viktor Orban is in a tight race for power with a newly established alliance of opposition parties — whose largest contingent comes from the far-right Jobbik party, which many consider a neo-Nazi movement.

The alliance, called United for Hungary, includes groups from across the political spectrum, and it has taken the unorthodox step of announcing a prime minister candidate before the election, selecting a centrist without a lot of political baggage in a clear signal that it intends to govern from the middle if it unseats Orban. But that doesn’t change the fact that success for the opposition alliance would give Jobbik, Hungary’s second-largest party, more power than it has ever amassed before.

Jobbik, whose critics charge is institutionally racist, is responsible for multiple antisemitic scandals, and Mazsihisz, Hungary’s largest Jewish group, has called the party “antisemitic” and “fascist.”

Pretz is among Hungarian Jews — a minority of at least 47,000 people with many political liberals — who won’t even consider voting for the Fidesz party of Orban, a nationalist who is accused of corruption, whitewashing Holocaust-era complicity and xenophobia, including against Jews. But he can’t bring himself to vote for the opposition, either, because of Jobbik.

“I am the descendant of Holocaust survivors. How could I vote for fascists? Of course I cannot,” Pretz told the Jewish Telegraphic Agency.

In 2012, one of Jobbik’s lawmakers called in parliament for registering all of Hungary’s Jews. That lawmaker, Marton Gyongyosi, now represents Jobbik in the European Parliament.

The party’s current leader, Peter Jakab, a Catholic who has Jewish roots, in 2014 blamed Jews for antisemitism and abusing the memory of the Holocaust for financial gain. His predecessor, Tamas Sneider, is a former skinhead who confessed to beating a Roma person in 1992 with metal cables in an allegedly racist attack.

Despite this track record, Jobbik in 2019 joined veteran, dyed-in-the-wool leftist parties such as the Green Party and the Hungarian Socialist Party in an opposition alliance that is now running against Orban’s party under the ticket United for Hungary.

Jobbik has tried to soften its racist image, including by sending Hanukkah greetings to prominent rabbis in Hungary. “The kind of antisemitic expressions which took place in Jobbik earlier are impossible to imagine,” a former party leader, Gabor Vona, said in 2017.

Hungarian liberals, Jews and Jewish community leaders have remained skeptical of this about-face by Jobbik leaders, especially since they have coincided with fresh racist scandals.

The stunning cooperation by parties on diametrically opposed sides of the ideological spectrum that for years have expressed seething hostility for each other has been both unexpected and controversial. It has spurred defections and condemnation by hardliners from its two main contingents.

It has also drawn external criticism, including by Orban, for the perceived moral elasticity of its members.

But the alliance has been effective beyond dispute in threatening Orban’s leadership. His party won the 2018 elections by a whopping 30 points over the runner-up, Jobbik. Now, for the first time in 12 years in government, Orban is facing the prospect of losing his grip on power. 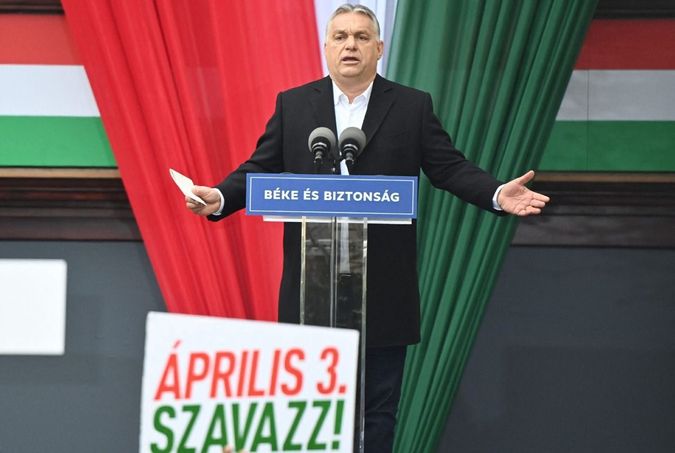 The polls give United for Hungary 45% of the vote, only 5 points behind Orban. If the Two Tailed Dog Party, which is not in the alliance but is hostile to Orban, makes it across the 5% electoral threshold and then joins a coalition with the alliance, Orban could be ousted, and Jobbik installed into power.

If that happens, Hungary will become “a fascist country” for Tomi Rosza, a 52-year-old Jewish financier and father from Budapest who intends to vote for Fidesz on Sunday.

If the opposition alliance, ”which is completely contaminated by Jobbik indeed, wins, we are going to make aliyah,” he said, using the Hebrew-language word for immigrating to Israel. “If this happens, I don’t want to stay here.”

Eszter Sinko is also contemplating aliyah in connection with the elections, but she said she’s planning to pack her bags if Orban is reelected. Her main complaint with Orban’s government is the corruption she and others see, she said.

She may vote for the opposition alliance, even though she believes Jobbik is antisemitic, or for the Two Tailed Dog Party. “It’s very sad,” Sinko, a 47-yer-old finance professional, said about her country’s political situation.

Even Jewish Orban voters are critical of some of his policies involving Jews. Rosza, for example, believes Orban promoted the whitewashing of Hungarian complicity in the Holocaust with his support for a monument erected in Budapest in 2014. It depicts an eagle attacking an angel in the context of the Nazi occupation of Hungary.

Rosza is among many Jewish critics who view the statue as an attempt to present Hungary, whose pro-Nazi governments helped murder hundreds of thousands of Jews, as mere victims. Orban has rejected this interpretation of the statue, which was erected despite heavy Jewish opposition.

This issue has prompted Mazsihisz, the largest Jewish group in Hungary, to suspend all dealings with the government and has even drawn criticism by EMIH, a Chabad-affiliated Jewish group that has tended to be friendlier than Mazsihisz to Orban. (Chabad, a Hasidic Orthodox movement, tends to seek to work with governments of any orientation, as long as they do not threaten Jews.) 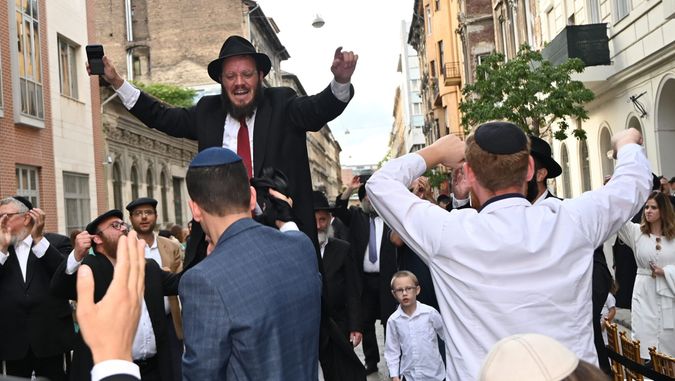 Both Jewish groups enjoy considerable government funding and have opened at least 20 new synagogues between them under Orban. Many Hungarian Jews are pleased with this renewal and with the fact that, at a time that antisemitic violence is grabbing headlines across Europe, such incidents remain rare in Hungary.

Still, Jewish voters such as Pretz feel as uneasy about Fidesz as they do about Jobbik.

“On the right segment of Fidesz, they are too close to the fascists,” Pretz said.

Orban has come under attack, including by Jewish community representatives, for rhetoric they fear may encourage antisemitism, including in the government campaign in 2017 and 2018 against the Hungarian-born Jewish billionaire George Soros, a major donor to liberal causes who is critical of Orban. (Soros is a frequent target of antisemitic criticism.)

Rosza rejects these allegations, arguing that, in his view, Fidesz generally does not allow antisemitic speech and generally has a low tolerance to that form of racism.

But most Hungarian Jews seem not to support Fidesz, Rosza said. “They traditionally support the left. Even when the left allies with the fascists. I can’t understand it,” he said. (There are no polls on the voting patterns of Hungarian Jews, who account for less than 1% of the population.)

“At least half of the country thinks Orban is so bad that anybody going against him must be better,” she said. Russia’s war on Ukraine, in which Orban has taken a less firm stance against Vladimir Putin than the rest of the European Union, to which Hungary belongs, further illustrated this, said Csaki, 65.

“I’m voting for the opposition of course because I want this to end,” she said. “It’s very bad for the country, for my moral scale and for the cultural sector in which I work.”

And how would she feel about Jobbik politicians reaching real power as cabinet ministers?

“Depends on the ministry,” she said. ”And at least it won’t be the whole country in Orban’s hands as it is right now.”

—
The post More Orban or a party with a neo-Nazi record? Hungary’s Jews don’t like their choices in this week’s election. appeared first on Jewish Telegraphic Agency.

More Orban or a party with a neo-Nazi record? Hungary’s Jews don’t like their choices in this week’s election.