The alleged killer was charged with murder Tuesday night, as a local synagogue prepared to mourn a community member killed in the massacre. A family embraces while observing the scene of a mass shooting at a July 4th parade in downtown Highland Park, Illinois, July 5, 2022. Photo by Max Herman/AFP via Getty Images

This story was produced in collaboration with Jewish Chicago: The JUF Magazine.

HIGHLAND PARK, Illinois (JTA) – Bright Bowls was open for July 4 in Highland Park’s main commercial district, and its owners, Lindsay and Matt Meltzer, were prepared for a busy day.

Lindsay had left her job at the Jewish United Fund of Chicago to open her dream business, a vegetarian smoothie shop and wellness studio, in June 2020. This would be the first year since the pandemic began that her suburb would hold its annual Independence Day festivities, including a parade, and the Meltzers were eagerly anticipating lots of foot traffic.

“We were joking, ‘Only in Highland Park does the Klezmer band come,’” Crane said.

“I was standing at the register, and all of a sudden, I see the Highland Park High School band running up the street,” Lindsay Meltzer said. “The first thought I had was that there was an active shooter.”

Moments later, a police officer rode up on his bicycle and told everyone to get off the street.

“We just opened our door,” Lindsay said. “We have a basement that’s about the size of our entire store, and we were able to house over a hundred people safely, away from windows.”

Her husband stood at the front door, keeping watch, while Lindsay guided everyone else, mostly families with young children, to hide downstairs. A teacher with some active shooter training, herself Jewish, played games with the children and helped keep everyone calm.

Meanwhile, Howard Prager, a tuba player in the band, said he thought he saw the shooter flee the scene. “We saw a lot of people running,” he said. “We saw the panic and terror in their eyes.”

Crane hid with her 6-year-old daughter in an abandoned storefront, separated from her husband and 1-year-old who were taken inside an apartment building by a good Samaritan.

“We live literally five minutes from that intersection [where the shooting took place],” Crane said. “That’s our neighborhood. That’s basically our backyard.” 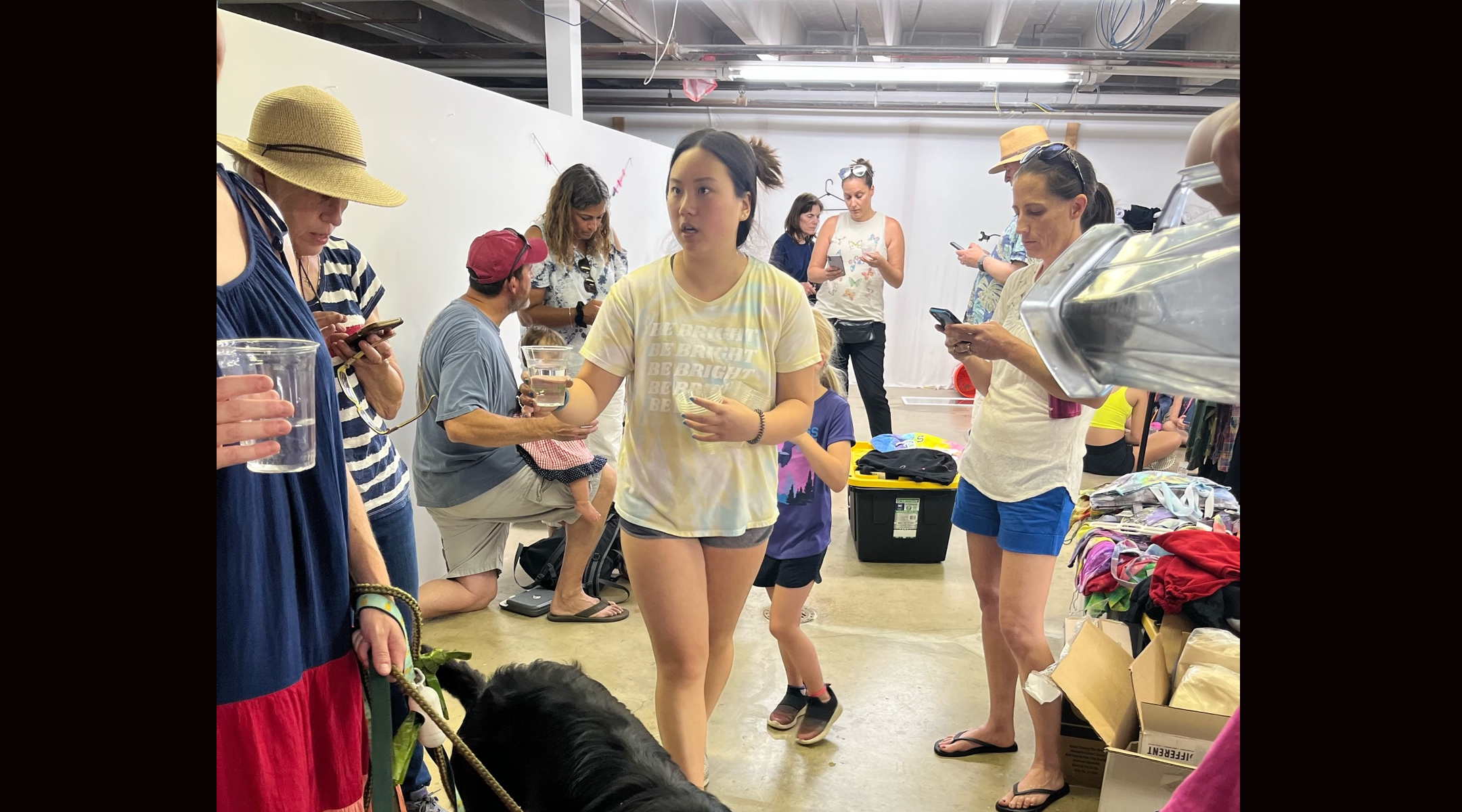 Highland Park, Illinois, parade-goers and Bright Bowls employees gathered in the store’s basement in the wake of a mass shooting, July 4, 2022. (Courtesy of Carey Walker)

Dozens of people were injured and the downtown left strewn with abandoned strollers and chairs as the shooting left a trail of devastation in the heart of Highland Park, a city of about 30,000 where about half of residents are Jewish. The victims included both Jews and non-Jews, in a reflection of the suburb’s diversity and the draw of its Fourth of July festivities.

Multiple GoFundMe pages began circulating online immediately for families of victims and survivors, including one for the 2-year-old son of the McCarthys, who will now be raised by his grandparents, Nina and Misha Levberg. That fundraiser drew nearly $2 million in its first 12 hours; meanwhile, a local rabbi who put out a call for pediatric spine surgeon referrals for an 8-year-old child from her congregation who was critically injured said she was overwhelmed by responses.

The Chicago suburb is home to a large Jewish community, including a substantial number of Israelis and the national headquarters of a liberal Jewish PAC. It was left in a state of shock and trauma following the event. Jewish camps and other activities were canceled around the area the following day, and some of the many synagogues in the area announced special services responding to the shooting.

North Shore Congregation Israel, located in nearby Glencoe, announced that one of the victims was Sundheim, a congregant, preschool educator and b’nei mitzvah coordinator at the synagogue. “There are no words sufficient to express the depth of our grief,” the synagogue said in a statement.

The congregation declined an interview with JTA, saying it was “fully focused on supporting our community right now,” but held a service of comfort and consolation in response to the mass shooting Tuesday evening. A separate memorial service for Sundheim will take place Friday.

Three members of Am Shalom, a Reform congregation in nearby Glencoe, were injured by the gunman and two went to the hospital with their injuries, according to Rabbi Steven Lowenstein, who said the injured did not want to release their names.

Multiple area Jewish spiritual leaders told JTA that while they did not want to speculate as to the motives of the shooter, their communities were wrestling with their feelings of security being upended. “I think our Jewish antennae go up a little bit on these things,” said Rabbi Jodi Kornfeld of Beth Chaverim Humanistic Jewish Community in nearby Deerfield.

Moffic, a longtime contributor to JTA sister site My Jewish Learning, told Chicago public radio station WBEZ the day after the shooting that “I do feel safe” in this community as a Jew, but added, “Of course this affects our psyche. It’s why we have many security measures at our synagogue.” Other rabbis noted that, while their own congregants may have been safe physically from the attack, they are feeling the damage psychologically.

Although local authorities have not yet said whether they believe the shooter’s motivation was antisemitic, at least one Highland Park rabbi reported that the suspect, whom authorities said had pre-planned his attack for weeks, had previously visited a synagogue: his own.

Yosef Schanowitz, the rabbi of the Highland Park Chabad, told the Orthodox news site Anash that he recognized the alleged shooter, who he said had been turned away from Chabad by its armed security guard during a Passover Seder this year. A spokesperson for Chabad told JTA the congregation has a security camera but didn’t say whether footage of the incident was captured.

The building’s security guard also confirmed to the Forward that the suspect had visited the congregation during Passover, saying he gave his name and sat in the sanctuary for 45 minutes before leaving.

No other North Shore area synagogues reached by JTA reported having seen the shooting suspect at their houses of worship.

Authorities said the alleged killer, who was charged late Tuesday with seven counts of murder, had obtained the high-powered rifle used in the massacre legally. The shooting has once again reignited debates around gun control measures in the United States — a subject even Highland Park’s own Jewish community has been divided over in the past.

In 2013, a local Jewish pediatrician named Arie Friedman, then a member of Beth El, sued the city over its new assault weapons ban, claiming that the ban was infringing on his Second Amendment rights.

A 2010 candidate for the U.S. House and 2012 candidate for the Illinois state Senate, and at the time active in the Republican Jewish Coalition’s Chicago chapter, Friedman brought his petition to the U.S. Supreme Court, which denied it in 2015. Friedman did not respond to several JTA requests for comment Tuesday, and his pediatric office said he was on vacation. A spokesperson for RJC told JTA that Friedman is no longer active with the group. He is also no longer a Beth El congregant, according to a local source.

Meanwhile, among the many local Jews who advocated for the ban was Marcia Balonick, executive director of the Joint Action Committee for Political Affairs, known as JACPAC, a liberal pro-Israel lobby group headquartered in Highland Park. She was riding a float at the parade with her son, grandson and grandson’s baseball team and witnessed the shooting.

“I never imagined I’d face this in my own community. Nothing prepares you for bloodshed on the streets I walk on,” Balonick said, adding that the incident would make JACPAC “more determined than ever before to ensure that we elect members of Congress who will once and for all put an end to gun violence with an assault weapons ban.”

Several Jewish groups, such as the Conservative movement’s Rabbinical Assembly, said the violent rampage was the latest instance of America’s failure to legislate firearms. “Our hearts ache for the lives cut short by gun violence and we despair that U.S. government leaders have not reacted decisively enough to prevent these tragedies from becoming commonplace,” the Rabbinical Assembly said in a statement, urging reforms.

The local Jews who scrambled to flee to safety and help people during the carnage said they were devastated that their once tranquil haven had become a horrifying scene.

“Matt and I have lived in so many different places in the world. We both grew up here, we fell in love here,” Lindsay Meltzer said. “We knew this was the place we wanted to raise our kids. I can’t believe it, it’s just upsetting that this has now hit our own town.”

Prager, who said his band’s clarinet player has decided he will no longer play at parades, is a regular attendee at virtual Kaddish minyan services hosted by My Jewish Learning. He says he takes comfort in Jewish rituals in times of crisis, and also tries to promote positive interactions with fellow humans via his book “Make Someone’s Day.”

“We need to find more ways to lift one another up,” he said. “Especially during these times. By looking for ways to make people feel better, by caring about one another.”

Correction, 10:33 a.m. July 6: This story was corrected to reflect the proper name of the Jewish United Fund of Chicago; a previous version incorrectly identified them as the Jewish United Fund of Metropolitan Chicago. It has also been updated with a statement from the Republican Jewish Coalition confirming that Arie Friedman is no longer an active member of the group.

This story was produced in collaboration with Jewish Chicago: The JUF Magazine. Its reporter is a member of the Highland Park Jewish community and has personal ties to some of the interview subjects, as well as at least one of the victims. JTA reporters Jackie Hadjenberg and Asaf Shalev contributed reporting.