Teen star gets ‘the most expensive bar mitzvah ever’ in film version of “13: The Musical” Eli Golden, center, stars in “13: The Musical,” a Netflix movie that features Debra Messing and Peter Hermann as his parents. (Alan Markfield/Netflix)

(New York Jewish Week) –  When Eli Golden started 8th grade at a Westchester public school last fall, he had the ultimate answer to the standard question: “What did you do over the summer?”

While his friends and classmates recounted tales of sleepaway camp, lazy afternoons and summer school, “I was just filming a little movie, that’s all,” Golden, 14, said in a recent Zoom interview with the New York Jewish Week. And it’s true: Golden had, in fact, spent last summer in Ontario, Canada filming Netflix’s movie adaptation of “13: The Musical,” which will premiere on the platform on Aug. 12.

Golden stars in the film as Evan Goldman, a 13-year-old who is prepping for his upcoming bar mitzvah and living his best life on the Upper West Side. When his parents get divorced, he is forced to move with his mother back into her childhood home — inconveniently located in the small town of Walkerton, Indiana.

The film is adapted from the musical that opened on Broadway in 2008 and ran for 108 performances, and returned Off-Broadway in 2011. Jason Robert Brown wrote the music and lyrics and Dan Elish and Robert Horn wrote the book.

In the show and film, young Evan Goldman grapples with his parents’ divorce, prepares for his impending bar mitzvah, and navigates the complicated social circles of a new school.

A recurring theme in the film is the small-town community’s general ignorance about Jews and Judaism. “Come on, I’ll show you the hillside where everyone waits for the Resurrection,” says a new friend as she shows him around the neighborhood.

No one seems to understand the importance of a bar mitzvah party — which Evan seems to think is the most important moment of his middle school life. On the first day of school, Evan invites his classmates to his bar mitzvah. “It’s this Jewish thing where they make you talk backwards and everyone gets circumcised,” one uninformed student interjects before Evan has time to explain.

Golden grew up Jewish in Larchmont, New York, where all his friends were Jewish as well. His experience on set, however, sometimes mirrored Evan’s in the film.

“On set, I really was [the only Jewish kid] for the most part, so it was fun to act it out,” he said. “I could sympathize with my [character] because I was in that situation, quite literally.”

“At the same time, I think being able to stay with a clique, but being able to open up to new people is really important, which is a great part of the movie,” he added.

Golden has been acting in commercials since age 6 and has had small parts in Netflix’s “Orange is the New Black” and “The Wizard of Lies,” the HBO film starring Robert de Niro as the late Jewish Ponzi-schemer Bernie Madoff. But “13” is his first big role — and it’s especially meaningful, he said, that it’s a Jewish one.

In fact, Golden said the bar mitzvah scene was his favorite one to film. By the end of the movie, Evan is seen chanting his haftarah in Hebrew in front of his new classmates. He then transitions into a d’var Torah — a sermon about that week’s Torah portion — which, because it’s a musical, involves breaking out into a song, “A Little More Homework”: “If you stand here behind me and you call me a man and you’re counting on me to come through, you should know that I’ll give you the best that I can, but we all have a little more homework to do.” 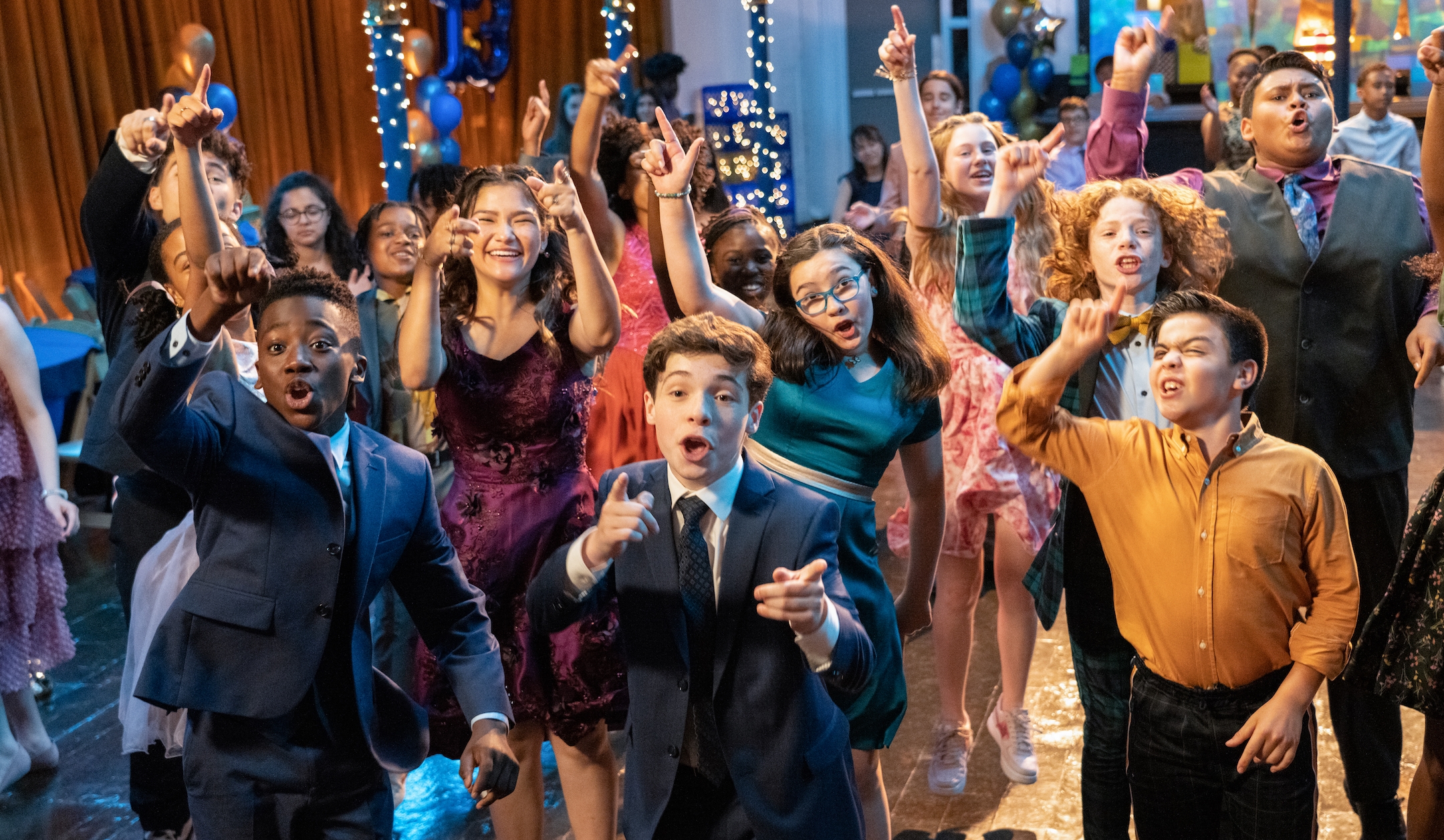 Golden dances as Evan at his bar mitzvah party in the film adaptation of the musical “13.” (Alan Markfield/Netflix)

In some ways, Golden said the scene was a stand-in for the bar mitzvah he didn’t have in real life. “’I’m not going to have my bar mitzvah [in real life], but I got to have a bar mitzvah on screen,” he said, referring to the movie.

“I guess you could say I had the most expensive bar mitzvah ever,” he added.

“It was intimidating,” he said. “I’m a Josh Peck fanboy, so being able to work with him was just insane. And Debra is a veteran of her craft. So I was intimidated at first, but I got to know them and it was very chill and nice.”

Even with a Netflix film under his belt, Golden plans to stay at his public school, be a normal kid, hang out with his friends around Central Park when he comes to the city and eventually see where his career takes him. “I definitely want to go to college,” he said. “I personally want to stay in New York, because I feel like L.A. is always kind of sunny.”

Teen star gets ‘the most expensive bar mitzvah ever’ in film version of “13: The Musical”