“Idina Menzel: Which Way to the Stage” shows the singer on a tour in 2018 — which included a stop in Pittsburgh just after the Tree of Life shooting Idina Menzel performs in a scene from “Idina Menzel: Which Way to the Stage.” (Eric Maldin/Walkman Productions Inc.)

(JTA) — Before becoming one of the most iconic vocal performers of her time, appearing in Broadway shows such as “Rent” and “Wicked” and voicing Queen Elsa in “Frozen,” Idina Menzel got her start singing as a teenager on the wedding and bar and bat mitzvah circuit near where she grew up on Long Island and other parts of the New York area.

“It was everything to me, formatively,” Menzel told JTA in an interview, of her early singing experiences. “I believe… that that had a lot to do with my education in music and genres, but also as a performer. I was so young when I did it… I would lie about my age, I would be 15 or 16 years old and I’d dress all mature and go in in high heels. I would usually be the only woman in a group of six guys.”

In the new documentary “Idina Menzel: Which Way to the Stage,” which had its world premiere in mid-November at the DOC NYC film festival and lands on Disney+ on Friday, Menzel discusses those experiences, even returning to the main venue where she used to perform at weddings and bar mitzvahs (the Inn at Fox Hollow in Woodbury, New York). The film also shows Menzel in Pittsburgh in the immediate aftermath of the Tree of Life massacre and shows her sharing her thoughts on it as a Jewish person.

The film, directed by Anne McCabe, follows Menzel’s 2018 arena tour, along with Josh Groban, which culminated in Menzel fulfilling her lifelong dream of headlining Madison Square Garden. It combines concerts with intimate behind-the-scenes moments, as well as archival footage from Menzel’s early life and throughout her career.

“When I heard that the tour was going to culminate at Madison Square Garden, I realized that it was a dream come true — it was a place that I’d always wanted to play, growing up on Long Island, and living in New York City, at NYU and beyond that,” Menzel said. “The fact that I was going to be playing there was a big deal, and I wanted to film it, no matter what I did with the footage, I know I just wanted to document it for myself, so I could take that in and really just appreciate the moment.”

As is often the case with documentaries, the film evolved a bit from its original purpose. 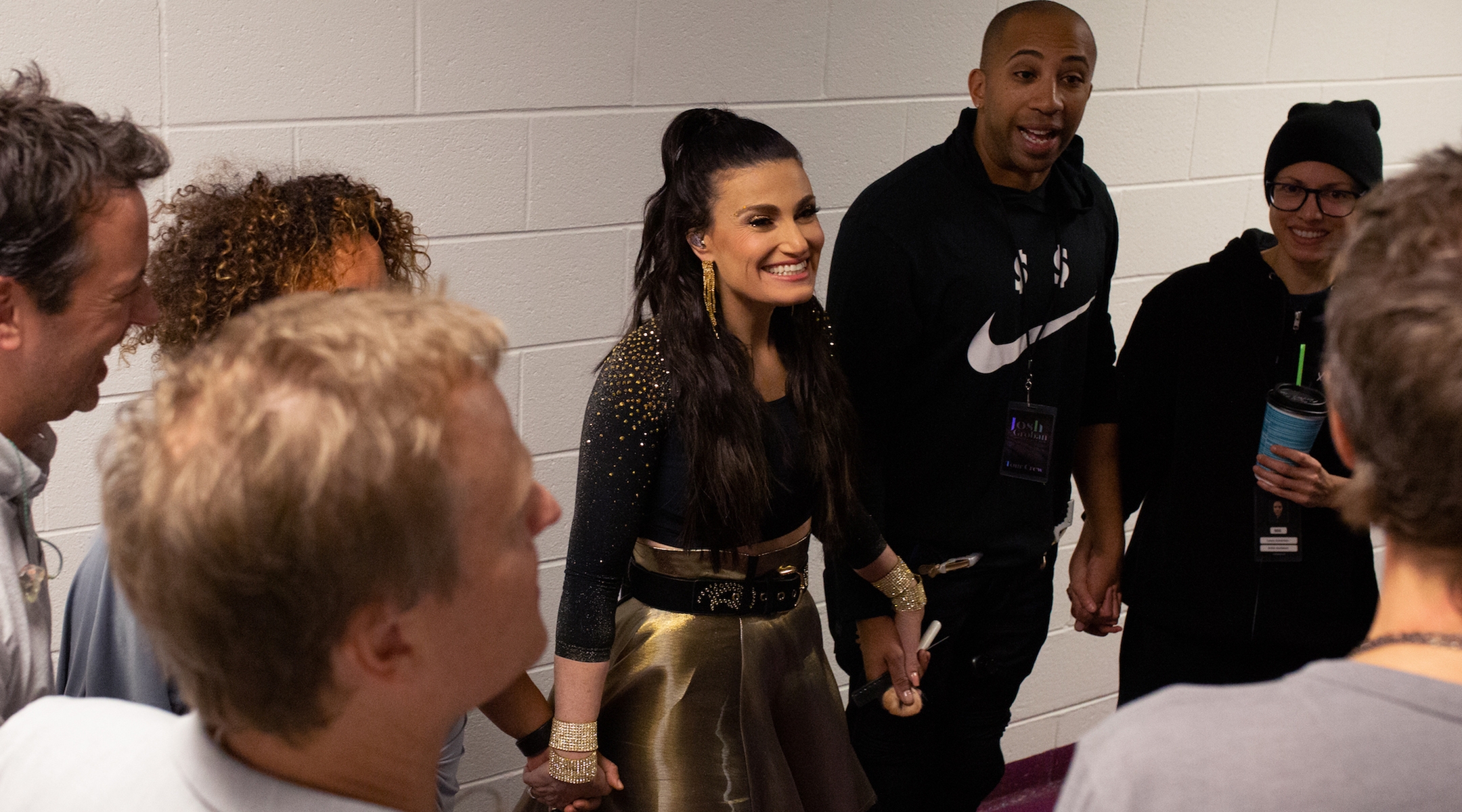 “In the process of filming it… it revealed itself in a different way. It became not just a tour documentary going city to city, but more about motherhood, and how we balance trying to pursue our passion and our dreams and also being there for our family,” she said. “That was a welcome surprise in the process.”

The documentary shows Menzel with her then-preteen son — from her previous marriage to Taye Diggs — and her husband, actor Aaron Lohr, while going through the process of in vitro fertilization.

The tour that the film follows arrived in Pittsburgh about two weeks after the 2018 Tree of Life synagogue massacre, and Menzel is shown singing the “Rent” number “No Day But Today” to a crowd at Pittsburgh’s PPG Paints Arena. (Menzel more recently wrote and performed a song called “A Tree of Life,” which was featured in the closing credits of a recent HBO documentary about the tragedy and its aftermath.)

In that part of the film, Menzel wears a shirt with a Jewish star that says “Stronger Than Hate.”

“That show was all about tolerance,” Menzel says of “Rent” in the film, while on stage in Pittsburgh. “It was about love, it was about community… I’m sitting here in this beautiful city, a Jewish girl from Long Island. I thought about how we light candles in the Jewish religion, sort of choosing light over darkness, choosing love over bigotry.”

“That particular concert is now tragically defined but what had happened in Pittsburgh, and I felt like I couldn’t ignore that, and I felt like that song was the right song for the moment, and that there was any way I could use my music to help heel then I wanted to do it,” she told JTA.

The documentary also looks back at Menzel’s entire career, from breaking through in the original production of “Rent” in the mid-1990s (the “which way to the stage” subtitle, as “Rent”-heads will know, is a reference to what was Menzel’s very first line in that musical), to an ill-fated run at a pop career, to her second big musical smash, “Wicked,” which landed on Broadway in 2003. Viewers also get the story of the “Frozen” phenomenon and its Menzel-performed torch song “Let it Go,” as well as other notable episodes — such as the time John Travolta mispronounced her name at the Oscars in 2014. (Menzel finds the whole thing hilarious.)

The COVID-19 pandemic was not the only obstacle in getting the documentary, which was mostly filmed four years ago, to the finish line. Menzel said in a post-screening Q&A at DOC NYC that because the documentary ended up on Disney+ and she is the voice of Queen Elsa, some curse words had to be taken out, as did a scene where she clutches a bottle of wine.

“I lost the funding at one point, and so I bought [the film] back,” Menzel said. “I wanted to find people that really believed in it and were going to creatively do right by it. I gambled on myself, which I try to do, and try to make a point of it. I’m just so happy that it’s come to fruition.”

The singer has spoken often about her admiration for another prominent Jewish singer and actress, Barbra Streisand. In her JTA interview, she praised the way Streisand “embraces her Judaism.” In the film, Menzel sings “Don’t Rain on My Parade” from “Funny Girl, the 1968 movie version that starred Streisand.

“I love her because she’s her. There’s no one else like her, and always aspired to be her unique true self. She didn’t change herself for anyone else. I also feel like, from a vocalist’s perspective, her talent is insurmountable. The way she sings, it feels like it’s just coming directly from her soul, it feels effortless. The way she tells the story through her singing, that I don’t think anyone else has.”

Menzel’s career is about to come full circle, with another bar/bat mitzvah-related performance: she is set to co-star in “You Are So Not Invited to My Bat Mitzvah,” a Netflix movie adapted from the young adult novel by Fiona Rosenbloom and directed by Sammi Cohen. The film will reunite Menzel with Adam Sandler, who played her husband in 2019’s “Uncut Gems” and will do so again in the new movie. (Menzel also brought up her character’s bat mitzvah in that very Jewish-themed film by the Safdie brothers.)

“We were much more dysfunctional in that movie,” Menzel said of “Uncut Gems”.

“You Are So Not Invited to My Bat Mitzvah” does not have a release date but is expected to arrive sometime in 2023. For now, she’s reveling in the documentary.

“It was just such a joy because I got to look back on it… I got to see myself as a little girl again,” Menzel said. “How I always believed in myself, even more so than maybe I do now. There was no one who was going to tell me that I wasn’t going to live my dream one day. I believed that I had something to offer the world, and so it was really emotional for me to see.”