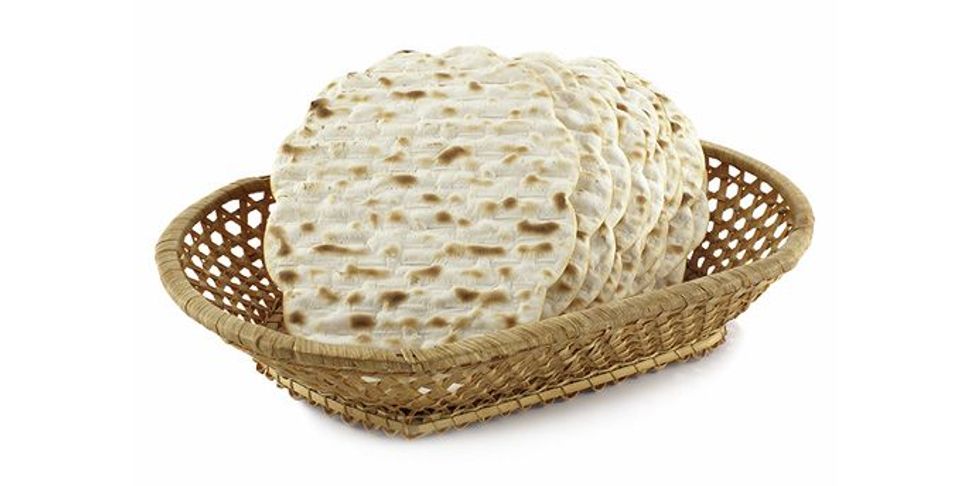 In a tradition in which food choices can be as divisive as they are unifying, matzo stands as Judaism’s strongest culinary bond. Kosher keepers and hardcore vegans alike eat matzo; so do Jews from Spain, South Africa and Miami Beach. And while the strictly cultural and staunchly religious Jews share few opinions on theology or lifestyle, it is safe to assume that both break “the bread of affliction” on Passover. But for all matzo’s ubiquity, and perhaps in part because of it, its deeper historical context often gets lost at the Seder table.

Plenty is known about matzo’s symbolic significance. Eating unleavened bread at the Passover Seder is a physical reminder of the Israelites, who, when fleeing ancient Egypt, did not have the time to allow their “cakes of dough” to rise. What doesn’t usually get explained is why that was such a big deal. There were undoubtedly many daily activities that the Israelites’ quick departure from Mitzrayim also rendered impossible, so why does the Exodus story focus on bread as the primary example? The answer points to the central role that baking bread plays in the establishment and identity of a society.

The Israelites’ earliest breads were unleavened flatbreads or cakes made of roasted barley. The word “matzo,” Joan Nathan writes in “The Foods of Israel Today” (Knopf, 2001), is likely derived from the Babylonian ma-as-sa-ar-tum, meaning “barley.” “The barley was ground with a flat stone; the stone was then heated with a flint stone until it was hot enough to cook the bread,” she writes. For centuries, these flat, rather tasteless cakes were the only “bread” the Israelites consumed. It was not until the Israelis encountered the ancient Egyptians that they learned about leavening.

The Egyptians, who lived amid the Nile’s rich grain-growing river valley, were the first civilization to discover the effect that leavening had on flour and water. “While all other peoples feared lest their food decay, the Egyptians set aside their dough until it [soured] and observed with pleasure the process [of natural leavening] that took place,” H.E. Jacob writes in “Six Thousand Years of Bread: Its Holy and Unholy History” (Doubleday, Doran, 1944). According to Jacob, the Egyptians also created the first ovens, which could bake this new, more delicate bread via indirect heat. The Egyptians’ advancements earned them the prestigious title of “bread eaters” within the ancient world.

Over time, bread has become a central and sacred Jewish food. “[In] Jewish tradition, add bread to a meal and you’ve seriously upped the ritual ante,” Anna Stevenson writes in “Food for Thought: Hazon’s Sourcebook on Jews, Food & Contemporary Life” (Hazon, 2008). “No other food has rules [and blessings around] how it is prepared and how it is eaten.” But when the Israelites first came to Egypt, they were nomadic shepherds, not the agricultural people they would eventually become. The concept of baking bread, which required a permanent home base from which one could grow grain, as well as immobile structures like brick ovens, was entirely new. They also likely learned from the Egyptians about emmer — an ancient wheat variety that grows indigenously throughout the Middle East and was better suited than barley for for leavened baking.

By the time the Israelites were living under the pharaoh’s rule, they had adopted the daily rhythms of baking bread into their lives. So when they fled Egypt for 40 years of desert wandering, they certainly left behind oppression, but they also left the comforts of the stable, agrarian society with which they had grown familiar. The transition was understandably traumatic — enough so that the Israelites cried out in the desert, “Would that we had died by the hand of the Lord in the land of Egypt… when we did eat bread to the full.”

The Israelites would eventually become bread bakers again. After settling in the Land of Canaan, they shifted to homebodies from being drifters, and instead of farmers, they were now shepherds who could cultivate their own fields of emmer, barley, wheat, rye and oats. And as Jacob writes, “[Once] they began baking real breads, they baked very well.” They established the trade of professional baker, and incorporated complex bread rituals into their Temple worship. “For centuries, the best bread was made from the purest flour solet and brought as an offering, with the purest olive oil, to the Temple in Jerusalem,” Nathan writes. Baking bread was just one part of the Israelites’ larger existence, but it played a crucial part in establishing them as a developed and independent society.

Returning to the Seder, then, eating matzo — whether it’s the square, factory-made kind, or the handmade, shmurah variety — represents much more than a rushed departure from Egypt. It represents the initiation of a journey that would bring the Israelites to self-sufficiency from dependence, and a celebration of bread’s power to sustain us.

Leah Koenig writes a monthly column for The Forward on food and culinary trends. Contact her at [email protected]

While the Middle East is home to the world’s most ancient wheat varieties, including emmer, today an estimated 90% of the wheat consumed in Israel is imported from the United States. Meanwhile, many of the region’s indigenous wheats, and the vast stores of biodiversity they represent, are on the edge of extinction. A growing movement of people, including regional farmers, educators and artisan bakers, are working to restore consumers’ awareness about these ancient wheat varieties and incorporate them back into the food system. “We have a deep and meaningful heritage of farming grains,” said Eli Rogosa, a leader of the movement and co-founder of the Israel/Palestine Seed Conservancy. “These grains nourish our story, our culture and spiritual traditions. White-flour challah [or matzo, for that matter] just does not cut it.”

Find out more about restoring the Middle East’s ancient seeds at www.growseed.org

Below, Leah Koenig speaks with a farmer from Cayuga Organics about ancient grains for everyday: