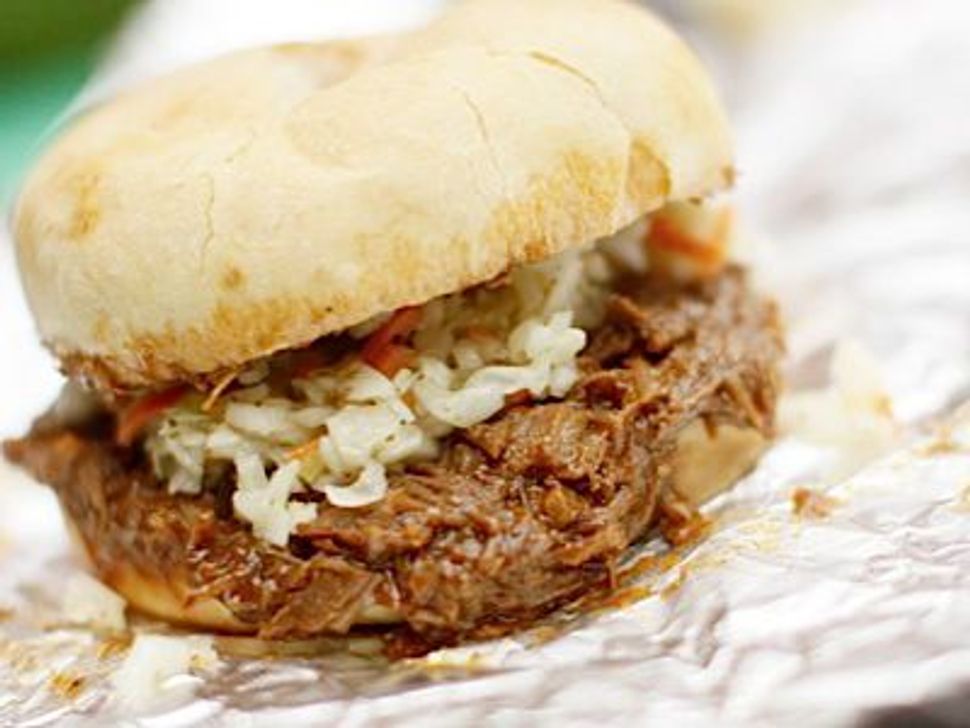 Every August, the parking lot of the Mid-South’s oldest Orthodox congregation fills with BBQ smoke. Forty-two teams from as far away as New York gather here to set up tents and spend most of a Sunday barbequing brisket, ribs, and beans as part of the annual Anshei Sphard-Beth El Emeth (ASBEE) Kosher BBQ Contest and Festival.

The BBQ pork that Memphis is known for, is replaced with beef and the competitors, who start cooking as early as 4am on Sunday, must use Weber-like kettle grills that the synagogue owns and stores all year just for the contest, to insure that all the cooking is kosher.

But with grills instead of fancy smokers, the fear of over-cooked meat can be seen in every competitor’s eye. And there’s no shortage of sauce in the team tents, some bought and doctored and others made from scratch, to add flavor and make up for any dryness.

This year’s ribs and beans winners, The Barfield Basters who hail from Memphis, added extra moisture to their offerings with generous amounts of Pabst Blue Ribbon (PBR) beer. Using an indirect method of heating, team leader Matt Cohen cooks the meat over a pan of PBR and then continues basting the ribs with it all day long.

The Pickering Potchkiers who have competed in the Memphis in May World Championship Barbecue Cooking Contest for 25 years, which the city is known for, entered the ASBEE contest for the first time this year and took home first place in the brisket category.

Rod Mitchell, the team’s head cook, says the secret to BBQ brisket is in the marinade, not the sauce. The team came up with a combination of Worcestershire, soy sauce, rosemary, garlic powder, and some “secret” ingredients for their winning marinade. They rubbed down the meat with it, sealed it up, and then refrigerated the brisket for 24 hours.

The Pickering Potchkiers also used the indirect cooking method and basted the meat every hour with the marinade. But they won’t deny the power of sauce. “The sauce had a sweet taste with a small, spicy tingle,” says Mitchell. They doctor KC Masterpiece Original with brown sugar, garlic, karo syrup and a few other ingredients they won’t disclose. Pouring it over the meat in a “certain way gets a juicy, award-winning piece of meat,” Mitchell adds.

Whether or not you know a winning team that’s willing to share (not everyone gets to taste all of the ‘cue unfortunately), you can still get some award-winning barbeque at the adjacent Cowsher Cafe, a tent run by the synagogue’s Sisterhood. The ladies cooked up 200 pounds of tender beef brisket, smothered it in barbeque sauce and served it on firm rolls to raise money for the shul. This year they also entered the cooking contest for the first time and took home second place in the brisket category. Using a (secret) bottled sauce as a base they add some heat with pepper cayenne, Tobasco, paprika and Crystal hot sauce. But, the most important addition, they say, is the gravy from the meat itself. It’s both the marinade and the sauce that makes the meat, they argue.

In Memphis, no barbeque sandwich is complete without a hearty helping of crunchy slaw. The Cowsher Cafe serves theirs on the side in a nice, big cup. Their slaw recipe has been passed down through generations and is a boiled combination of vinegar, sugar, canola oil, mustard, and celery seed. According to Debbie Lazarov, the Cowsher Cafe cooking chair, the mixture “is poured over shredded cabbage, carrots and onions, and marinated for at least 24-48 hours.”

After some tastes of the ‘cue, a side of Cowsher Café’s coleslaw and some BBQ beans you start to understand why BBQ competitions have a cult following.