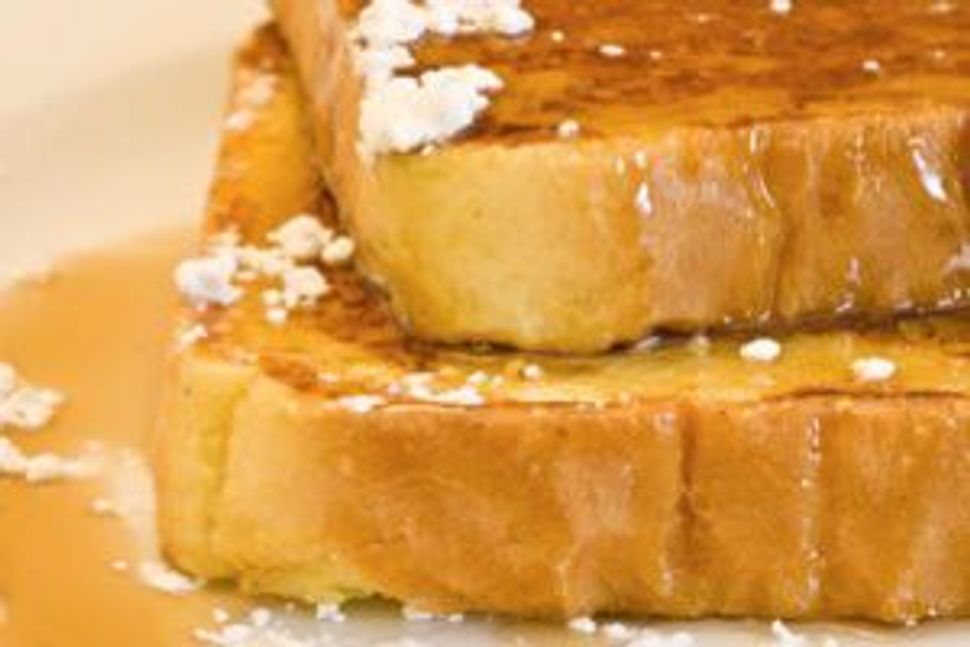 There are few things more wonderful for a creative cook than the challenge of figuring out how to repurpose leftovers well. Leftover roasted chicken adds protein to a spinach salad and rice from Monday can make Wednesday’s soup hearty. But thanks to the back-to-back scheduling of Rosh Hashanah and Shabbat this year, many of us are currently left with overwhelming amounts of round challahs, that are on the verge of becoming stale.

Instead of freezing the challahs (bread really is best when fresh), I will be using them to celebrate the New Year this week at my dinner table. Orange challah French toast served with turkey bacon, puts a spin on a favorite brunch food and makes a delicious dinner.

For this recipe, regular or raisin challah works well and the turkey bacon provides a nice salty contrast to the sweetness of the bread. Simply, replace the milk with orange juice in the egg mixture and add a dash of cinnamon as well. Orange zest adds a brightness to the flavors. Serve it with maple syrup or orange marmalade.

2) In a bowl whisk together the eggs, orange juice, orange zest, cinnamon, salt and honey.

3) Dunk the challah slices into the egg mixture until they are just saturated on both sides (you can also pour the egg mixture over the slices in a lipped sheet pan, turning the bread after 2 minutes)

4) Melt margarine on a griddle or in a large frying pan, coating the surface well.

5) Place the challah slices on the pan or griddle and cook for two to three minutes per side, until golden brown and slightly crisp around the edges.

6) Serve with turkey bacon and syrup.