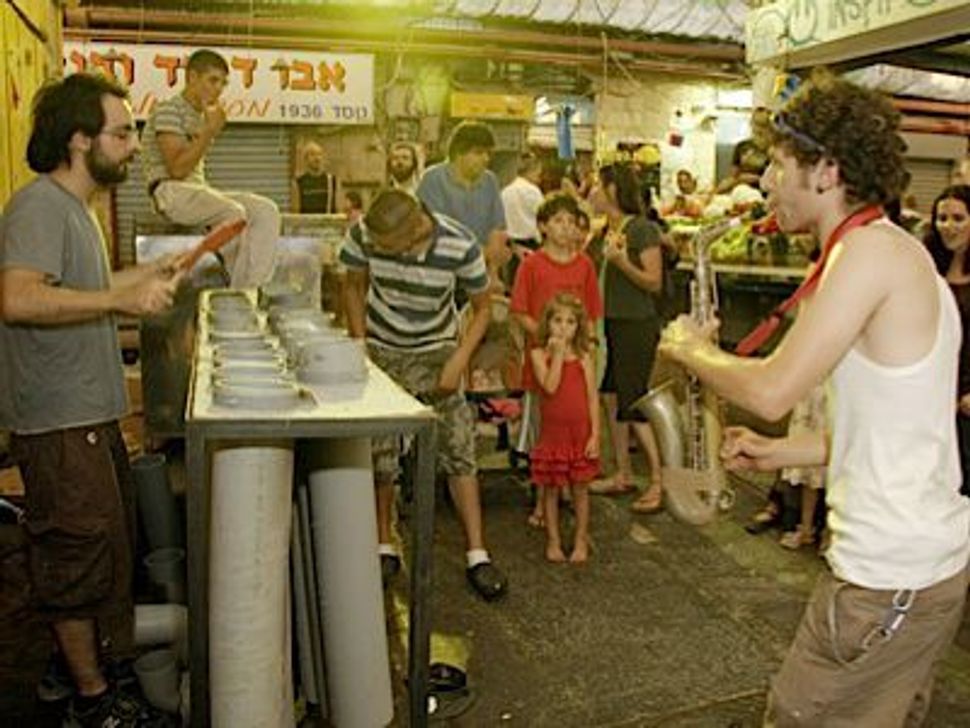 How would you like some music with your cucumbers? How about some sculpture with your spices, or some performance art with your favorite fruits?

This is exactly what visitors to Jerusalem’s storied Machane Yehuda market, or shuk, were treated to each Monday night last month. Thanks to the Balabasta Festival put on by the new Jerusalem Season of Culture, more than 100 mostly local musicians and artists performed in small groups between the market stalls that stayed open well after the normal sunset close time.

Some artists created works with items from the shuk like sculptures made from candies, spun sugar figurines and wallets made from vendors’s plastic bags, while large bands perched on a rooftop stage overlooking the shuk’s main thoroughfare, which was filled with dance lessons.

Once known mainly as the site of populist election campaigning and terrorist bombings, Machane Yehuda has become a gentrified, chic destination over the last decade. With entrepreneur Eli Mizrachi leading the way nine years ago with his espresso bar and gourmet bake shop, fancy cafes, shops and restaurants have taken root alongside the traditional market stalls.

For New Yorkers Dan Schwarz and his wife Rina Cohen Schwarz, who years ago shopped for produce at the shuk while studying in Jerusalem, this was a revelation. “We were surprised to see something like this in the shuk. It was incongruous, but great – really fascinating,” they said.

Itay Mautner, artistic director of Jerusalem Season of Culture, and his team worked for months with the local community council, the Mahane Yehuda business owners’ association and artists to craft an event that would be new and cutting edge, while at the same time respectful of, and inspired by, the every day people and century-old traditions of the shuk.

“The think tank we created for this project was a great way to learn to listen to the locals and for people with different perspectives to pay attention to one another and work together,” said Mautner. “Artists had to respect the people of the shuk, and the old-timers of the shuk needed to not disrespect the culture of art.” In an effective and bridge-building move, Mautner hired a young man whose family has owned a spice stand in the market for generations to work as a leading producer for Balabasta.

Drawing ten to twelve thousand people of all age groups and backgrounds each night, Balabasta was deemed a huge success. Plans are already in motion for another festival for the summer of 2011 to celebrate Mahane Yehuda’s centennial.

The centennial iteration will retain the Balabasta branding. It’s triple-meaning play-on-words: Ba la-basta (come to the stall); Ba’al ha-basta (stall owner); and a slight variation on the Yiddish word for housewife, Balabuste, suits the celebration.

For a glimpse of the festivities: