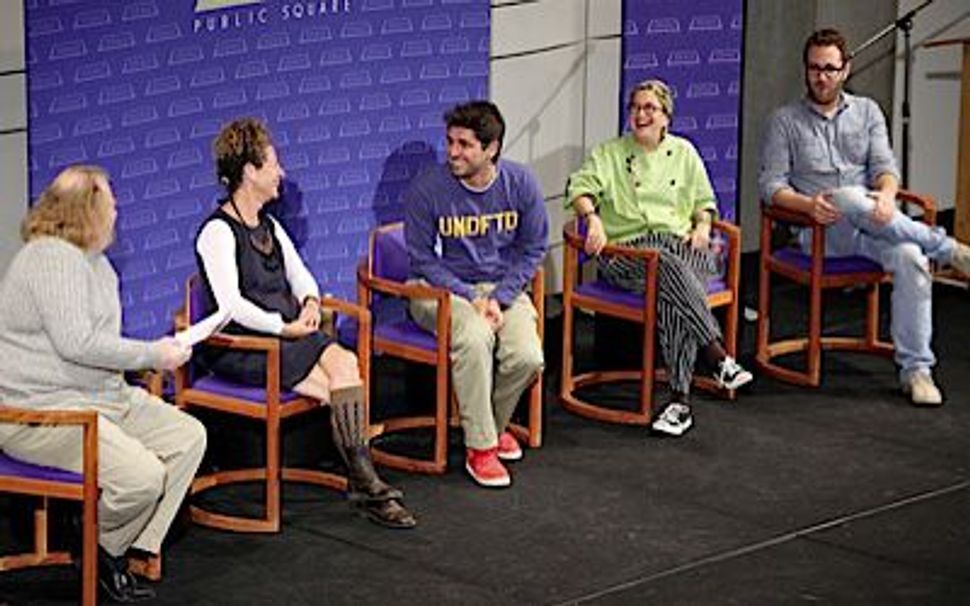 With Gold as witty inquisitor, the panelists — Susan Feniger one of the first Food Network stars, Ilan Hall, the second season “Top Chef” winner, Ludovic Lefebvre a nationally recognized chef, and Nancy Silverton chef and cookbook author — discussed their rise to fame in the food world and their take on what it is to be a “celebrity chef” today.

So what was the answer to the question? A resounding, Yes, and No.

Gold began the discussion with a story about the backlash against the culture of celebrity chefdom, which he saw the day before during a city hall hearing on bringing new food vendors, including celebrity chef’s restaurants, to LAX.

“It was occurring to me then, almost more than at any other time, that good chefs should be celebrated for bringing the kind of great food that we’ve come to enjoy. … A lot of the momentum behind sustainable, local, organic, seasonal food is definitely coming from the chefs’ community.” Celebrity chefs 1, LA City Council 0.

Hall, the youngest of the group, who rose to fame almost overnight said: “It was a month [long] process. I was a line cook in New York. I sent in a videotape to be on some competition that I’d never seen. And a month later I’m filming a TV show; six weeks after that we’re on a TV show.” But he didn’t deny the impact of his win on the opening of his restaurant the Gorbals, a Jewish-Scottish restaurant that drew national attention in the food last year. Feniger, who was already a well-known chef in L.A. in the 1980s, began filming her TV series “Too Hot Tamales” (with Mary Sue Milliken) on the Food Network in the early 1990s, said the show changed business at her restaurant, Border Grill dramatically.

Silverton, who is an acclaimed chef and author, considered herself the odd one out: “Of all my colleagues here on the panel, I do not consider myself a celebrity chef,” she said. Despite her culinary fame, she excluded herself from the group because she hadn’t appeared on “Top Chef” or otherwise been featured on TV.

Though, Silverton perhaps best crystallized the dilemma of celebrity-chefdom. The positive: the ability of cooking shows to inspire young people to become chefs. The negative: “people who get in to cooking for all the wrong reasons, and part of it is they want to be stars, and that’s not a reason to cook.”

Clearly, fame in food can cut both ways, and the answer to the original question — “Are celebrity chefs good for food?” — depends on what type of celebrity chef one is talking about: a knowledgeable, charismatic chef who has experienced the high-stakes challenges of restaurant cooking, or an eager cook with nominal skill who looks and sounds good in front of the camera. And it was obvious that there was greater respect on the panel for those chefs in the former category (the chefs like Marco Pierre White, Jamie Oliver, Alain Ducasse were mentioned) rather than those in the latter (only Tyler Florence’s name was brought up, though there are a number of Food Network chefs who fit the description).

However, if cooking schools are any indication of the next generation of chefs, then perhaps we’re heading more toward the latter, according to Gold. “When I go to cooking schools and talk to young chefs today about what their hopes for the future are, oddly enough television comes up more than the kinds of kitchens they’d like to work in.”