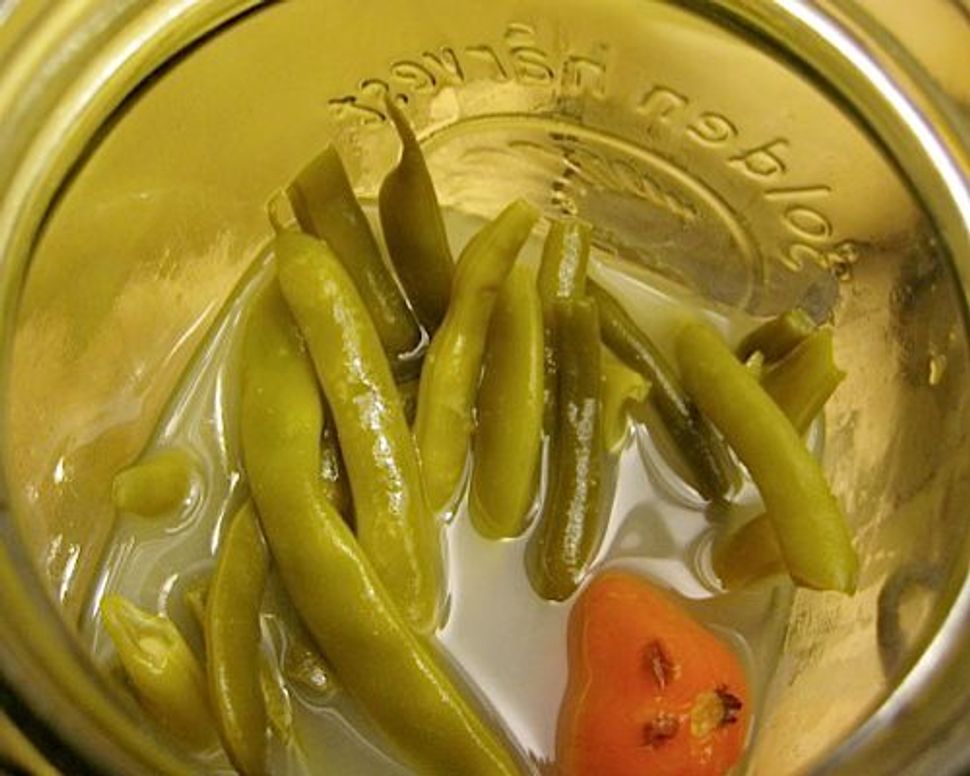 Traditional Ashkenazi cuisine without fermented foods would be unrecognizable, not to mention less tangy. Latkes would be served without sour cream, and with no corned beef or sauerkraut, a deli sandwich at Katz’s would be nothing more than two vacant pieces of rye toast, unaccompanied by a sour pickle no less. Passover seders would have no wine, and without yeast, we’d be stuck with the bread of affliction all 353 to 385 days a (Jewish) year.

Thank goodness, then, for Sandor Katz, aka “Sandorkraut.” Katz is a food activist and fermentation revivalist who specializes in pickled foods from around the world. “[There are] Korean style pickles and Indian style pickles and Lebanese style pickles. People in most parts of the world have some sort of pickles that actually are important parts of their cuisine,” he says. His book, the 2003 Wild Fermentation, a DIY fermented foods bible, includes recipes for everything from kimchi made with fruit to Gv-No-He-Nv, a sour corn drink from the Cherokee tradition.

While his interest in pickled foods may take his palate afar, his love of pickling is tied to his cultural roots as a New York Jew. Katz says he is drawn to the flavors of his cultural heritage that he ate as a child. “Growing up in New York City, experiencing my Jewish heritage largely through food, I developed a taste for sour pickles,” he writes in “Wild Fermentation.” He goes on to describe an early pickling effort that went sour (literally and figuratively) that he overcame, “compelled by a craving deep inside of me for the yummy garlic-dill sour pickles of Guss’ pickle stall on the Lower East Side of Manhattan and Zabar’s on the Upper West Side and Bubbies’ in upscale health food stores.”

Not that “pickles” always means cucumbers. “I love brined watermelon rind pickles,” says Katz. “Usually in the United States they’re done as sweet vinegar pickles with what I call the Christmas spices, like cloves and cinnamon, but if you brine them they taste just like cucumber pickles.”

“Pickles are made in such infinite variation,” says the cook-author-activist. “Every year in the Lower East Side of Manhattan, the New York Food Museum organizes this international pickle festival.” The event, called Pickle Day, which is coming up next weekend showcases New York picklers alongside pickling traditions and styles from New York’s vast immigrant population.

But for pickle lovers like Sandorkraut (and us), we won’t have to wait until then for some half-sours. “Right now I have all of these pickles in my fridge and every time I open my fridge it just smells like pickles, and I love having that smell in my life and around me,” Katz says.

1) Guesstimate how many jars you’ll fill with the string beans you have. Thoroughly clean jars and line them up.

2) Into each jar, place 1 clove garlic, 1 teaspoon (5 ml) of salt, 1 whole red chili pepper, 1/4 teaspoon (1/5 ml) of celery seed, and a flowering dill top or small bunch of dill leaves. Then fill the jar with beans standing on end, stuffing them as tightly as you can into the jar.

4) Seal the jars and place them in a large pot of boiling water for a 10-minute heat processing.

Leave the dilly beans for at least 6 weeks for the flavors to meld, then open jars as desired and enjoy.

2) Clean the crock, then place at the bottom of it dill, garlic, fresh grape leaves, and a pinch of black peppercorns.

3) Place rinds in the crock.

4) Pour brine over the rinds, place the (clean) plate over them, then weigh it down with a jug filled with water or a boiled rock. If the brine doesn’t cover the weighed-down plate, add more brine mixed at the same ratio of just under 1 tbsp of salt to each cup of water.

5) Cover the crock with a cloth to keep out dust and flies and store it in a cool place.

6) Check the crock every day. Skim any mold from the surface, but don’t worry if you can’t get it all. If there’s mold, be sure to rinse the plate and weight. Taste the pickles after a few days.

7) Enjoy the pickles as they continue to ferment. Continue to check on the crock every day.

8) Eventually, after one to four weeks (depending on the temperature), the pickles will be fully sour. Continue to enjoy them, moving them to the fridge to slow down fermentation.