All Shakshuka’d Up: Eggs Israeli Style 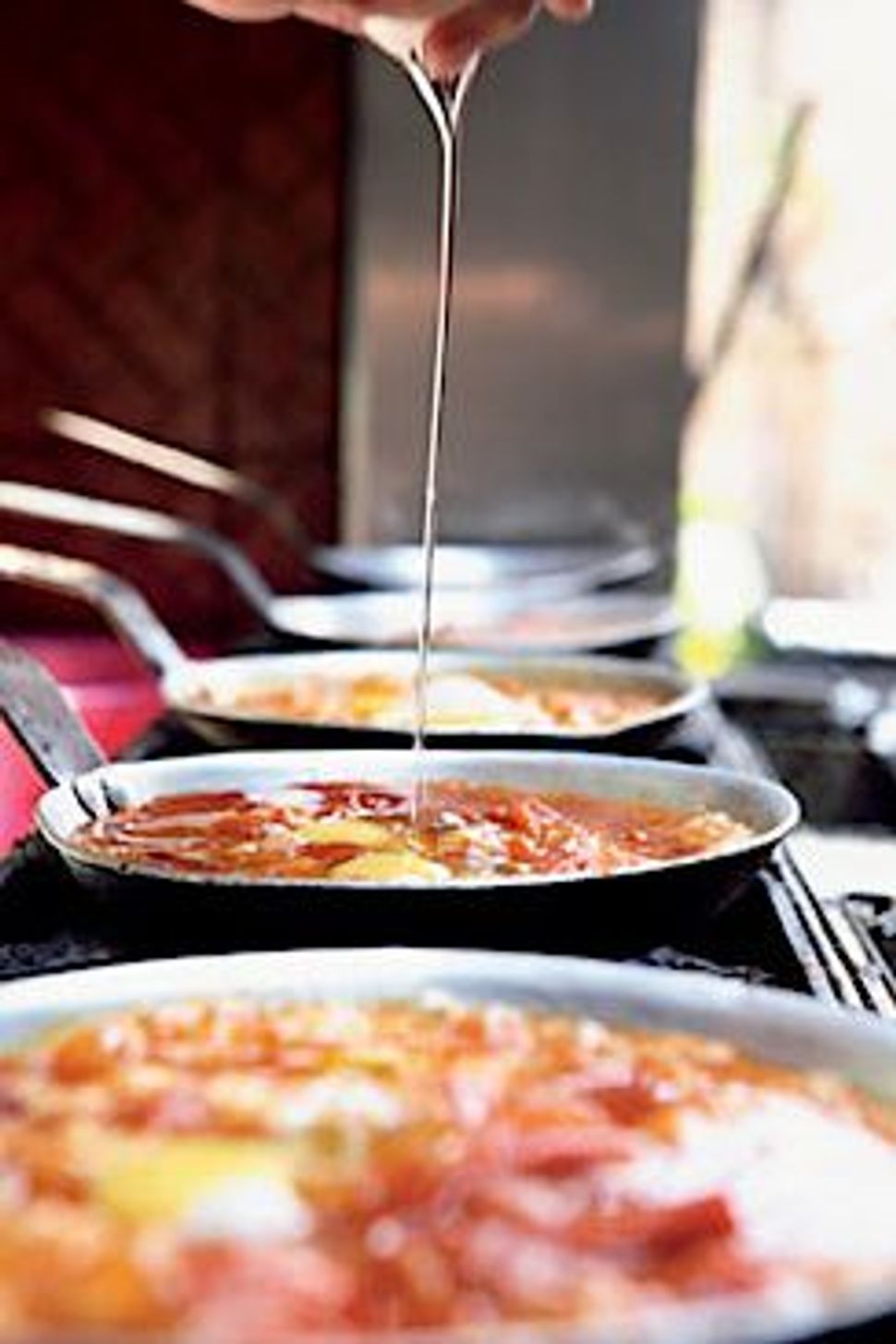 A culinary confession: During my first weeks as an exchange student in Israel, I walked by a roadside café and peered at the fare on offer, and there it was, right next to the hummus and salad: something that looked like eggs swimming in tomato sauce. I thought it was probably the most unappealing dish I’d ever seen. 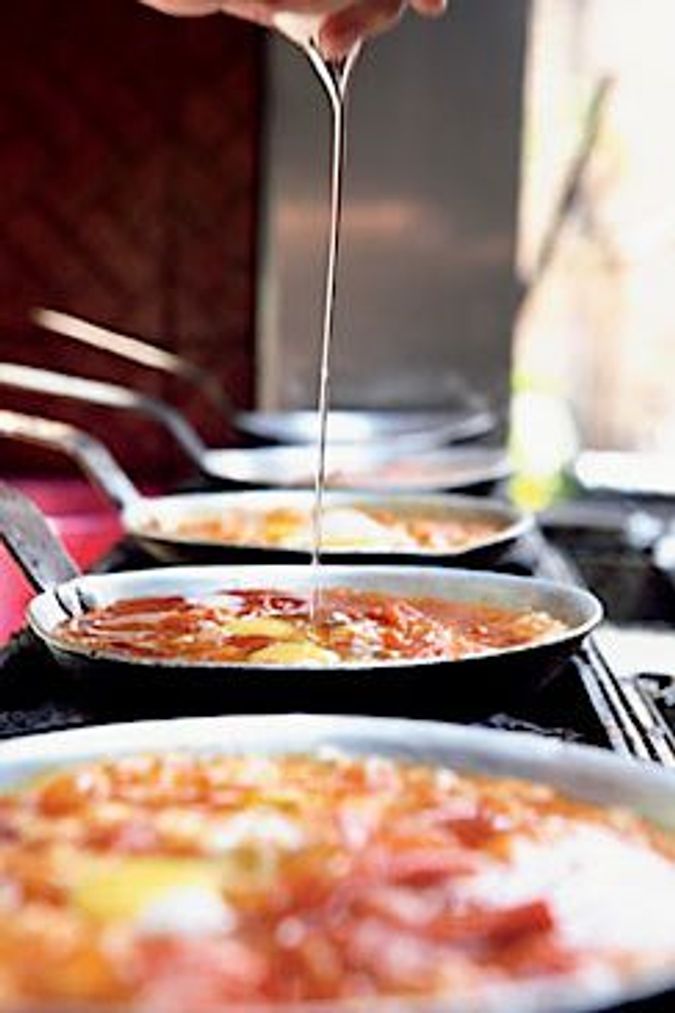 Little did I know that, years later, I would become a passionate devotee of shakshuka, one of Israel’s most popular cuisines, where eggs are nestled in a bed of steaming tomatoes, onions, and spices, and are cooked on a stove top.

The beauty of shakshuka preparation is its flexibility. It’s the ultimate meal to prepare at home when it seems there is nothing in the pantry. Like making spaghetti sauce for pasta, it can either be composed of completely fresh ingredients or quickly whipped up out of a can. And, like any egg dish, it can be eaten for breakfast, lunch or dinner. It is the ultimate brunch cuisine, quick and easy enough to be able to sleep late and still impress your guests.

Remembering my initial uneasy reaction to the sight of it, I warn visitors from the U.S. that at first the egg-tomato combination may seem strange, but to give it a try. And after a few bites, they are hooked.

Tracing its origins is complicated. Immigrant groups from every North African country in Israel will argue ownership. It definitely originated in the Magreb region of North Africa – the two frontrunners for the crown are Libya and Tunisia. The most famous purveyor of shakshuka in Israel is a charming restaurant that offers “Tripolitanian” cuisine – Dr. Shakshuka, tucked in the heart of the bustling Jaffa flea market.

It is served in a wide variety of restaurants: from the simplest hummus joint to trendiest of restaurants. In the more upscale restaurants, there are new interpretations of the dish. Some make it a heartier meat meal, including chorizo or merguez sausages in the recipe. Others lighten it up, substituting spinach or leeks for the tomatoes and adding ricotta, kashkaval or feta cheese.

For those in a hurry, shakshuka can be a sandwich, plunked in a pita with salad and hummus. A popular option in hummus restaurants is ordering “hamshuka” – where the shakshuka rests in a nest of hummus and the entire plate is mopped up together with pita or bread.

The recipes below are from Janna Gur’s “The Book of New Israeli Food: A Culinary Journey”. One is a simple, everyday recipe, and one, a more modern elaborate variation.

Tips for home preparation: some swear by room temperature eggs, and insist on taking them out of the refrigerator half an hour before preparation. It is best to be judicious on the spiciness until one’s audience is familiar with the dish. As with any egg dish, each diner has their personal preference as to whether they like their yolks runny or hard.

1) Heat the oil in a large deep skillet and lightly fry the garlic. Add the tomatoes and seasonings and cook for 15-20 minutes over low heat, partly covered.

2) Add the tomato paste, cover and simmer for a few more minutes. Adjust the seasoning − the sauce should have a strong, piquant flavor.

3) Break the eggs one by one and slide onto the tomato sauce, arranging the yolks around the pan.

4) Turn heat to low and cook until the egg whites set (about 5-7 minutes). Partly cover the pan to prevent the sauce from spraying around the kitchen. Cover completely if you like your eggs “over hard”.

1) Prepare the base: Heat the oil in a skillet, add onions, sprinkle with sugar and fry gently until the onion is soft and golden-brown, about 10 minutes.

2) Meanwhile, bring water to a boil in a large pot and blanch Swiss chard only until it wilts. Plunge into a bowl of ice water to stop cooking. Remove with a slotted spoon and squeeze out excess liquids. Set aside.

3) In the same pot blanch spinach until it wilts and turns bright green. Plunge in ice water and squeeze out excess liquids. Set aside.

4) Heat the remaining oil in a large skillet, add spinach, and cook over low heat for 20 minutes, stirring occasionally. Add wine and cook until it evaporates. Add cream and basil leaves. Season with pepper, salt and nutmeg and cook until thick sauce is formed.

5) Add Swiss chard and fried onions, mix and adjust seasoning. The base can be used immediately or kept refrigerated for 2-3 days.

6) When ready to serve the shakshuka: melt the butter in a non-stick frying pan. Spread a 1/2 inch thick layer of the spinach-Swiss chard base. Using a wooden spoon handle, create two craters in the sauce and slide 2 eggs into them. Cook until yolks are set but still soft. Add ricotta and chili and serve immediately.

Reprinted with permission from Janna Gur’s “The Book of New Israeli Food: A Culinary Journey”.

All Shakshuka’d Up: Eggs Israeli Style