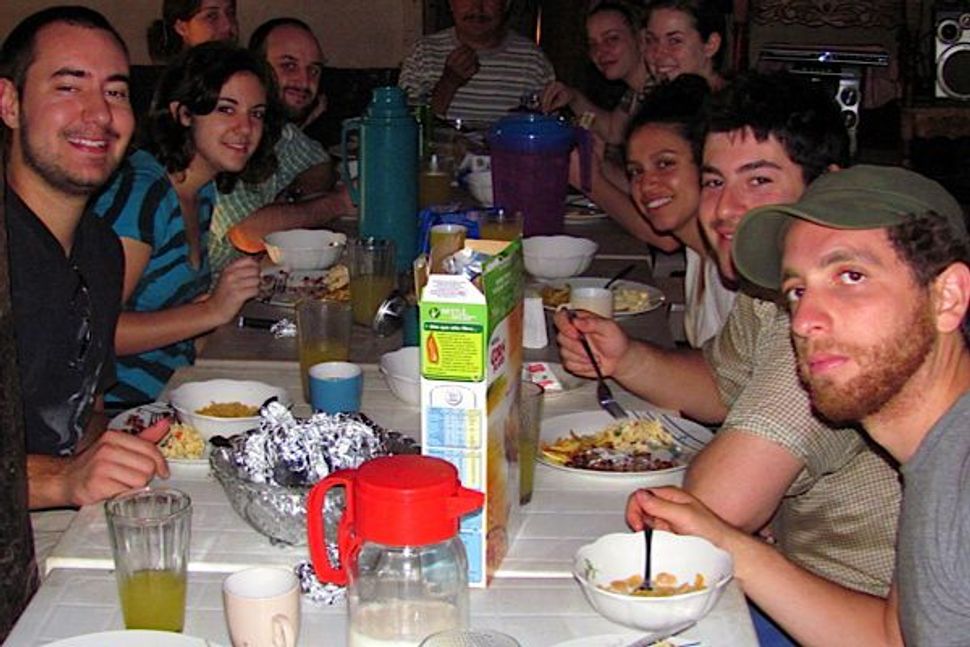 In the desert of Peru, there is no challah bread and definitely no kosher wine. That, however, didn’t stop the participants of AJWS’s volunteer summer program from sanctifying the Sabbath in a special way. They found their kosher substitutions in a sweet bread called bizcocho and a drink made from purple corn known as chicha morada. In an ever-shrinking world, an increasing number of opportunities are appearing for kashrut-observant Jews who wish to visit exotic foreign locales. But the age-old question for the wandering Jew remains: Where can we eat? 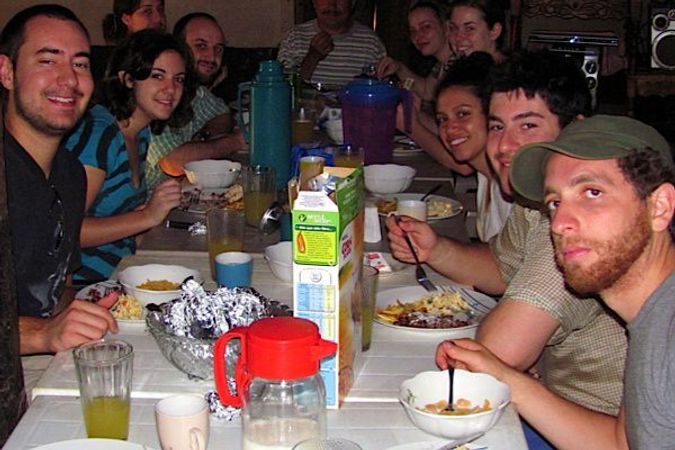 American Jewish World Service, which runs 25 service-learning programs each year in rural communities in countries such as Burma, Liberia, and Cambodia, often venturing where no Jews have previously set foot, has devised ways to eat local and kosher food in some of the most remote parts of the world.

Refusing to bring in food from abroad, AJWS works with local cooks, who they train in the rules of kashrut to set up a kosher kitchen at each project site. The organization’s basic guidelines, which it sends to it’s local non-governmental organization partners, stipulate that no meat or dairy will be served to participants, all packaged foods must be “ingredient kosher” and a fresh set of pots and pans must be purchased.

Dahlia Norry, 20, an undergraduate student at Tufts University and participant in the seven-week volunteer summer program in Peru this past August, was impressed by AJWS’s approach to kashrut “because there was so much more they had to take into consideration in the developing world that I had not thought of beforehand.” She gave the example of speaking to the local community about vegetarianism before the trip and being prepared with new silverware. Nonetheless, Norry mentioned that keeping kosher was not always easy on the trip. “Definitely for the group it was a struggle. Three times a day it was an issue,” Norry said.

The leadership at AJWS acknowledges that keeping kosher at their work sites comes with no shortage of difficult situations. On a trip last year to Nicaragua two students, concerned with bishul akum, a Talmudic injunction that specifies that Jews must be involved in the cooking of kosher food, woke up at 5:30am to light the cooking fire. But the limitations of kashrut end with what participants eat. While planning a program in Uganda, the local organization, knowing the Jewish prohibition against eating pork, checked in with AJWS to see if participants could help build an income-generating piggery for the community. They could.

In some countries, the challenges come from the local food culture. Adam Esrig, group leader for two AJWS trips in 2010 said, “In a country like Peru, if they aren’t feeding you cheese and meat they don’t know exactly what to feed you. They look at you a little funny. They express concern that you won’t be comfortable.” Another example is the commonly used chicken and beef bouillon cubes of Latin America, which AJWS has had to repeatedly explain to local cooks cannot be used – even though the cubes are a far cry from resembling meat.

In other countries the locals have an easy time adjusting to the rules of kashrut. In India, for example, where vegetarianism is common, eliminating meat is a simple request. In Senegal, cooks are often Muslim and observant of Halal, so they readily understand the connection between religious obligation and dietary law.

AJWS is not the only program designing kosher programs in improbable places. There is an entire generation of programs that, unlike typical kosher tourism, aren’t settling for pre-packaged foods with an occasional stop at a far-flung Chabad house. Ve’ahavta is a Canadian organization that runs ongoing volunteer opportunities in the rainforest of Guyana. “We want to make volunteer opportunities available to anyone who wants to roll up their sleeves and engage in tikkun olam,” says Sarah Zelcer, Director of International Projects and Education at Ve’ahavta. Though she couldn’t help but mention that many have eaten “a great deal of fresh fruits and vegetables.”

This January, AISH is running a week-long trip educational trip to India. Kosher, of course. Camp Kanfei Nesharim runs outdoor adventure programs for observant Jews to places like New Zealand, Australia and Hawaii. Rabbi Ben Zion Scheinfeld founder of the camp, described his elaborate kashrut system, “A week before camp the counselors and I go out shopping for food both packaged and fresh that can be shipped and paper goods etc…We pack up 60 crates less than 50 pounds each and at the airport each kid is given a crate to take as their second piece of luggage.” The group cooks its own food and flies in meat from the kosher community in New Zealand.

Ultimately, all of these efforts to keep kosher in unlikely places yield lessons well beyond kosher logistics. By removing themselves from an environment where kashrut is taken for granted, young Jews are forced to ask themselves why they keep kosher at all – a question they may never have asked before. Norry, reflecting on her trip commented, “I appreciated how [kashrut] was this unavoidable conversation with the community. Something I never had to think about before…Why keep kosher?”