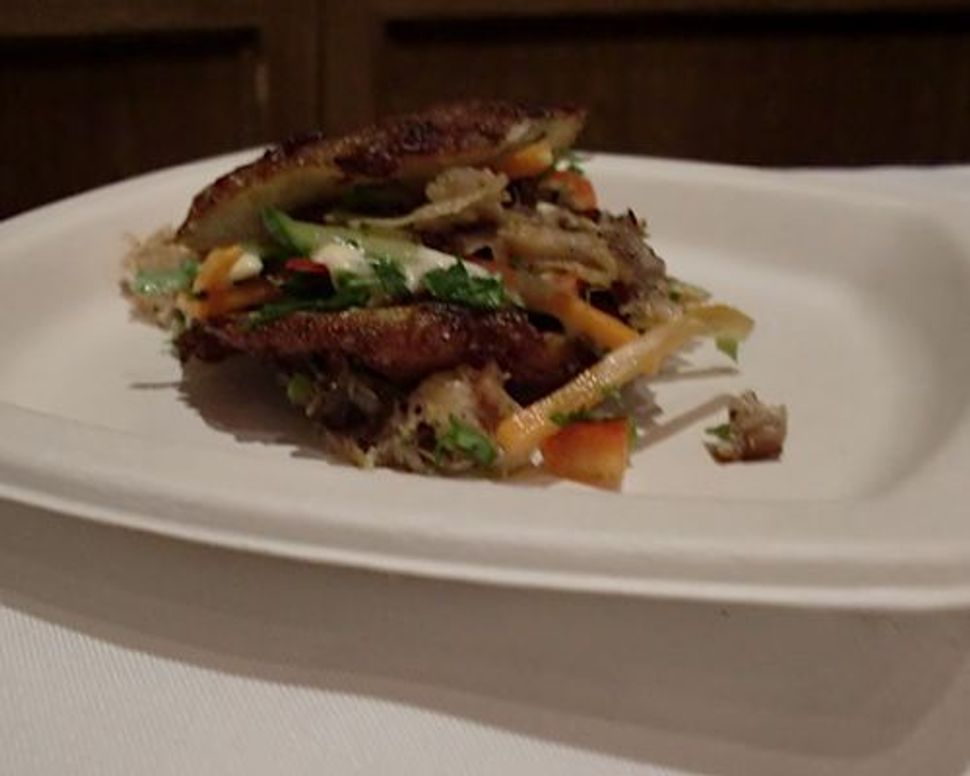 While our blogger Temim Fruchter has been on the search for the perfect Hanukkah donut, I have been hunting down an unusual and creative gourmet latke as a reprieve from classic recipes. So far this year I have sampled 14 varieties – ranging from classic to topped with braised beef, purple potato to ginger and pork belly-stuffed (yes, pork belly, more on that later) – and while my desire for fried potatoes has been satisfied twice over, my appetite for a truly intriguing latke has only barely been whetted. 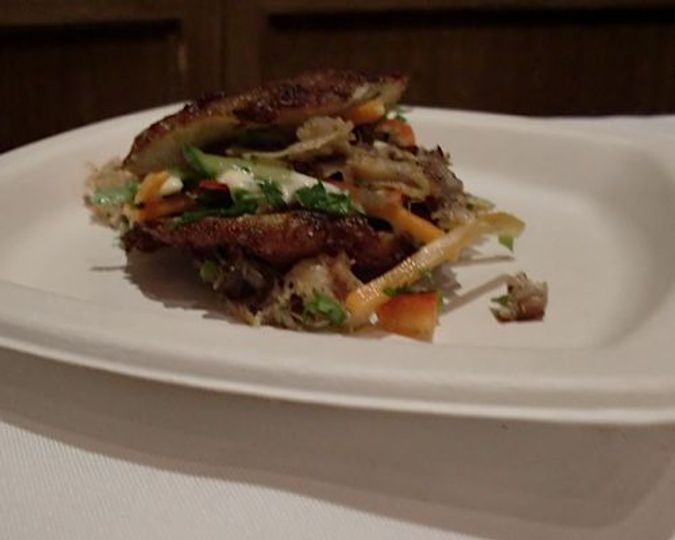 Innovation in the arena of latkes seems to go one of two ways. Either the cook dresses the latke, as New York Times columnist Melissa Clark proposes in a recent Dining section article, or the cook remakes the latke by adding ingredients or seasoning the of the potato.

Sunday evening’s 2nd Annual International Latke Festival at City Winery, which pitted five veteran chefs against one another for the best latke, offered some interesting variations on the old classic. Cuban, American, Israeli, Russian and Chinese interpretations battled in the culinary throw down. “This year we wanted to do something untraditional… to take something like the lowly potato and jazz it up – it’s a great vehicle for so many things,” said Jack Kiggins, who prepared a “Cuban latke” topped with a well-spiced ropa vieja, chipotle sour cream and micro greens.

Liz Neumark, who took on the Israeli variation, which she executed with various toppings inspired by the shivat haminim, or seven species of Israel (fig and crème fraiche along with eggplant and pomegranate tapenade, were two of the options), came in second in the competition but left the traditional latke recipe, which served as her base, virtually untouched. Neuman, Kiggins (who won the voter’s choice award) and the “American chef” Tom Sullivan who presented three latke offerings including one accompanied by a yellow lentil salad, all chose Clark’s route to innovation, using a conventional (and scrumptious) base for their creations.

Marc Spooner, who prepared a Russian latke and is originally from the South, played on his roots and presented diners with a tater tot latke (twice cooked – once baked, once fried) with a dollop of smoked salmon crème fraiche. Spooner took one step outside the traditional to remake the latke but wasn’t able to match the creativity of chef Matthew Rinzyk’s Chinese latke.

Inspired by the popular Chinatown snack sesame pancakes, Rinzyk created a ginger and sesame flavored potato pancake sliced thinly in two to form a sandwich, stuffed with roast pork belly, a lightly pickled Asian slaw and sriracha aioli. A clear and delicious echo of the Asian flavors seen in Chinatown, the Chinese interpretation of the Hanukkah classic was creative, fresh and the only latke at the event to perfectly balance luscious and rich meat with a vegetal crunch. Unsurprisingly, Rinszyk’s latke didn’t fare well with the largely Jewish crowd and was relegated to last place. While his meat choice may have been misguided for a Jewish food event, his idea and balance of flavors were spot on. His delicious latke sandwich could easily be made with kosher Peking duck to evoke another Chinatown favorite – Peking duck sandwiches in soft little Asian buns.

While Hanukkah may be a holiday of purity – pure oil, a pure temple and even an ancient Israel purged of Greek and Syrian occupants – innovation and creativity is worthwhile in the Hanukkah kitchen.