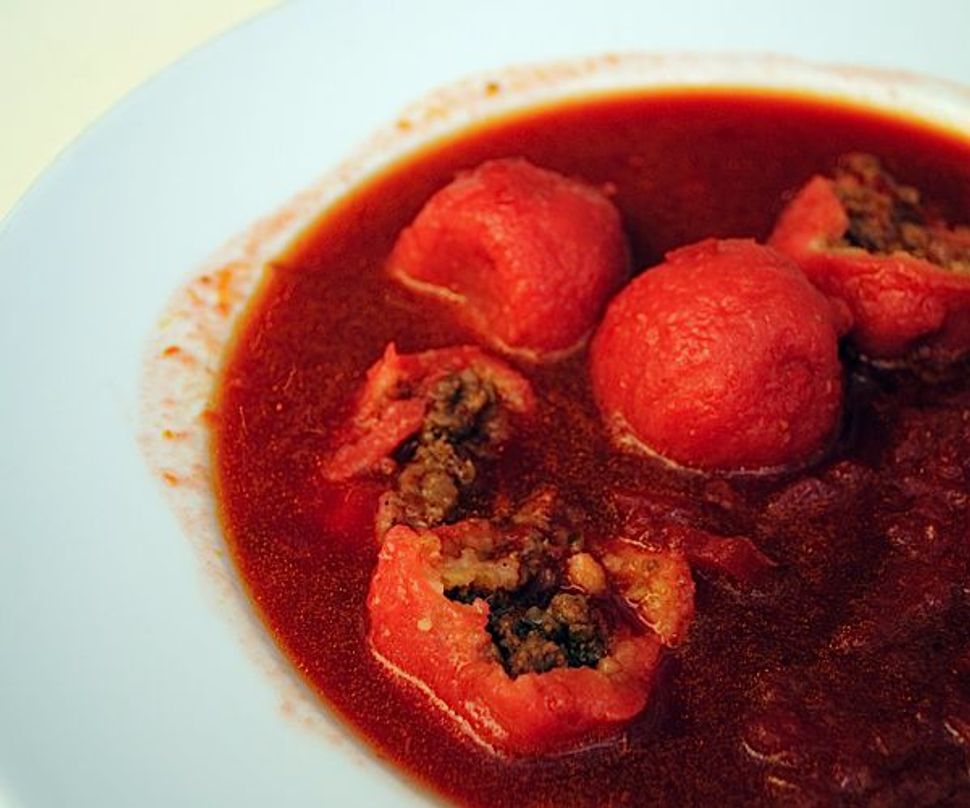 Between 1941 and the 1970s the majority of Iraq’s Jewish population faced institutionalized violence and persecution in their homeland, forcing them to flee. Today, only a handful of Jews remain in Iraq, down from an estimated 150,000 in 1948. For the Iraqi Jews who sought refuge in Israel (some sources say up to 90%), their food is their remaining legacy. Dishes like meat stuffed dumplings called kubbeh are their lifeline to a country they cannot return to, and recipes are carefully passed down through the generations to preserve their heritage.

Iraqi food has been incorporated into the Israeli zeitgeist and has become an integral part of the patchwork that is developing into Israeli cuisine. Kubbeh (also spelled kubba and kibba), and in particular the hearty soup known as marak kubbeh, is one of the dishes that is most beloved and recognized by Israelis of all ethnic backgrounds. Sometimes fried and served as an appetizer, they are more commonly simmered in broth and served as a hearty, comforting stew – something of a step-sibling to the lighter, Ashkenazi matzo ball soup, and closely related to fried Syrian kibbe. Although served year round, there’s no better time than the cold months of winter to enjoy a steaming bowl of this robust, tangy soup.

Kubbeh dumplings are made from semolina or bulgur wheat and are typically stuffed with ground lamb or beef, although chicken, fish, and even vegetarian variations exist. They can be served in many broths, but as Recipes by Rachael – a website dedicated to preserving Iraqi Jewish recipes – describes, “Kubba stews come in two categories: those that are slightly tangy from the addition of citrus, and those that are not.”

The sour, tangy soups are given the label hamousta while the so-called sweet stews (really meaning not sour) are called hulou. Within these two categories there are countless variations, which can include okra, eggplant, squash, zucchini, garlic or beets. Marak kubbeh adom, or red kubbeh soup, is a Kurdish specialty that is based on a crimson red broth made from beets and other root vegetables.

The labor and time-intensive dumplings are often made in large quantities so that a number can be frozen and easily enjoyed later. Since the soup can be left to simmer for a long time it is a mainstay of Shabbat meals. Speaking of the customs of the Iraqi Jews in their homeland, Claudia Roden explains in “The Book of Jewish Food” that they “left pots of kubba – meat dumplings in a bamia (okra) stew, which had been prepared on Friday – on the roof terrace, for the Saturday lunch.” In Israel today kubbeh remains a popular dish to make at home or to take away from restaurants to have on hand for Shabbat.

One of the best places to sample authentic kubbeh is Jerusalem’s bustling Mechane Yehuda market, where there is a thriving Kurdish and Iraqi Jewish community. The market houses an Iraqi section (established in 1931) and any number of Iraqi restaurants that hawk their specialties. Among the many options, favorites include Rochmo, an institution since the 1930s, Mordoch, whose motto is “At Mordoch, we roll kubbeh,” Ima which means “mother” in Hebrew, and the Ima Kubbeh Bar (which serves only kubbeh). And if a bowl of soup doesn’t merit a quick trip to Israel (some would say it did), Ima recently opened a branch in Teaneck, NJ where you can get genuine, hand-rolled kubbeh stateside.

Or, for those feeling like a culinary challenge, try making the soup at home. Recipes for kubbeh can be found in many of the first generation of Israeli cookbooks that were published in the 1960s, indicating how early Iraqi Jewish cuisine was absorbed into Israeli cuisine. In the recipe below, from the now out-of-print 1964 “The Israeli Cookbook,” author Molly Lyons Bar-David combines elements of various kubbeh traditions, including the addition of pine nuts and use of bulgur, both of which are more often associated with Syrian kibbeh. While the dumplings may seem a tad unmanageable at first, you’ll find them to be highly forgiving and the end result will be more than worth the effort.

1) For the soup, put the meat into the water and simmer about 1 hour. Pound the remaining soup ingredients in a mortar (or put through a mincer or blender) and add to the soup when the meat is done.

2) For the dumplings, soak the cracked wheat in water long enough to make it paste-like (about 1 hour). It is traditionally then pounded in a mortar with salt but, you can omit this process.

3) Make small balls of wheat, insert a finger, and work the wheat around and around to make jackets.

4) Fry the chopped onion in oil, add the chopped meat, and fry until it loses its red color.

6) Put the filling into the kubbeh and smooth the coating over to close them. Flatten them somewhat and cook in the boiling soup for 20 minutes.

Adapted from “The Israeli Cookbook: What’s Cooking in Israel’s Melting Pot” by Molly Lyons Bar-David (Crown Publishers, 1964; out of print)