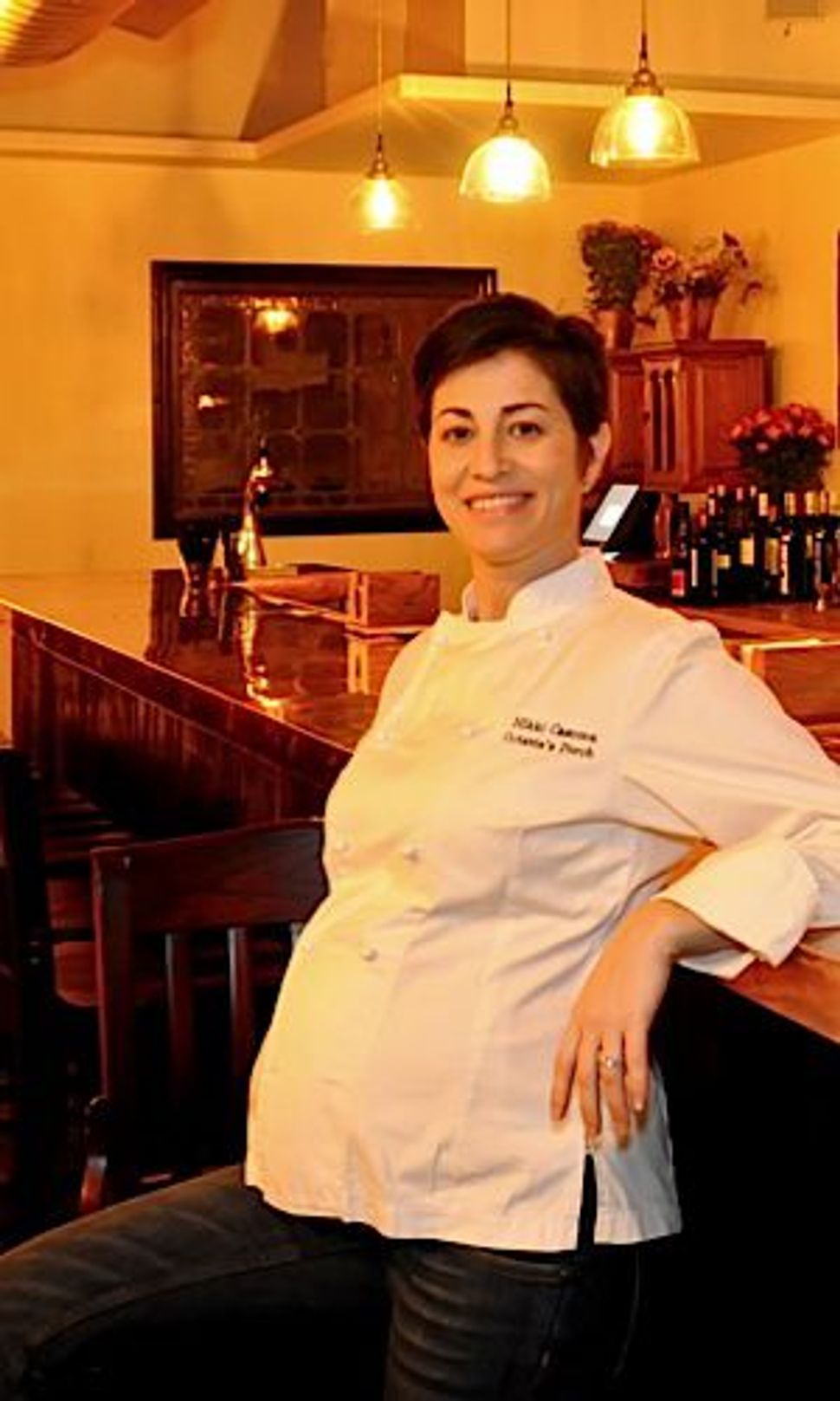 In December, she opened Octavia’s Porch, a restaurant serving global Jewish cuisine, with her husband, Brad Grossman (whose father is Jewish, and mother is Italian).

Though traditional Jewish foods, such as gefilte fish and kreplach, make their way onto her plates, Cascone adds international flavor to almost every dish. The gefilte fish is not your grandmother’s — served with radish, lime and fresh horseradish. The kreplach is served Asian style, with soy and scallion. The schmears, in particular, pays homage to both Italian and Jewish culture. There’s the traditional Jewish salmon-cucumber-dill, but there’s also an Italian-style white bean, lemon and chive variety.

We spoke with the nine-month-pregnant “Top Chef” alum about sustainable gefilte fish, her unborn baby, how Hanukkah is “bull”, and much more.

Lucy Cohen Blatter: Wow, opening a restaurant when you’re eight months pregnant. That must have been difficult.

Nikki Cascone: It’s insane. Unbelievably insane. I don’t know how I didn’t go into pre-term labor. Menu testing and hiring people is brutally hard when you’re getting into your third trimester.

Octavia’s Porch has been in the works for about eight years. It really is my baby. Essentially I’m having two births this year.

You seem to be embracing your Jewish culture with Octavia’s Porch. What was your upbringing like?

My mother is Ashkenazi and my father’s Sicilian. But they divorced when I was three, so we’d have seders and huge Italian Christmases too. I went to Hebrew school, but we weren’t very religious. My parents said we could choose what we wanted to do. But what I’ve found is that in Judaism, there’s much more of a relationship between the food and the religion.

Will your baby boy be Jewish?

He’ll never be a chef, I can tell you that. He’s going to be non-denominational. We’re going to educate him on all the cultures and traditions. We’ll light the candles on Hanukkah and have a Christmas tree, too.

Did you ever consider making the restaurant Kosher?

Not even for one second. It would have been too much of a challenge. We’re being isolated somewhat just by serving Jewish cuisine, I didn’t want to be even more so. I didn’t want to be kosher and only be available to the… Jews who [keep] kosher in New York.

But you don’t serve pork or shellfish. Why not?

First of all, you don’t see it a lot in Jewish food. Also, I wanted to keep to the integrity of the culture. It was challenging, but I didn’t feel like my hands were tied. Believe me, I’m like every chef — I want to eat pork all day long, but I wanted to stay genuine.

I got an angry letter from a woman who said you can’t call yourself Jewish if you’re not kosher. I responded that this is my artistic, culinary expression of how I grew up. I’m not going to debate it.

I have all the respect in the world for kosher restaurants like the Second Avenue Deli or Solo. But my thing was I want to respect the cultural element and the food.

Hanukkah? It’s kind of a bull holiday. There’s this story about a miracle of oil lasting eight days. But we’ve made all these food traditions around it. It all comes back to the food.

Is Octavia’s Porch modeled after any other restaurants in New York?

No, there’s nothing like this in New York. Because even my traditional foods aren’t served in traditional ways. I took those ideas and gave them a completely different spin. Like my kreplach — it’s not in broth, but it’s served Asian style. This is not meant to be your grandmother’s gefilte fish.

Do you serve both Ashkenazic and Sephardic-style food?

Its completely global — Ashkenazi and Sephardic. But you find two different countries on almost every dish.

Is there one characteristic that defines Jewish cuisine?

The things people relate to are Jewish deli foods. But it’s hard to define Jewish cuisine. I think it’s because it’s hard to say where it’s from. It’s not just Israeli or Eastern European. The Jews were exiled all over the world.

But a lot of the technique comes from the fact that the religion doesn’t allow cooking after sundown on Friday, so there’s a focus on braised meats, pickled foods and cold foods that could be served on Saturdays.

What makes the restaurant Jewish despite all of its global influences?

These are dishes you would see in Jewish restaurants around the world.

But, it’s bistro-like, too. It’s a modern menu. I make a sweet potato latke with a lime creme fraiche. But it’s not so different. I would put that on Jean Georges’ menu. What’s so different about that?

What are your bestsellers?

It always amazes me the things that sell, like gefilte fish and chicken livers. I probably make at lease four dozen matzoh balls a day. We blow through matzoh ball soup like it’s nobody’s business. I couldn’t give away chicken liver in my old restaurant. Now I can’t keep it in stock.

Did you specifically want to find a space on the Lower East Side (a historically Jewish area)?

Yes. I mean, yes, you look for affordable rent. But with this concept, it was important to have the history. It’s a real mix of young people and old-school neighborhood people who come here.

How did you come up with the name?

It’s the name of the thoroughfare in Rome’s Jewish neighborhood — Pórtico de Octavia. We loved the name because it sounded so neighborhoody and it’s Italian Jewish connection. But there’s already been a lot of controversy because it’s associated with the Jewish “ghetto” and people incorrectly think that’s a derogatory word.

What are some dishes we have to try?

Our homemade kreplach made from beef and veal, with sweet soy, scallion and ginger. The gefilte fish is made with sustainable fish, radish, lime and horseradish, etc. It can change someone’s idea about it. I think the sauteed chicken livers are something you have to try. My favorite is a handcut buckwheat tagliatelle, with baby arugala, radicchio, mushrooms, and a goat cheese sauce. It’s so Italian. But we also have these great smears, like eggplant caponata and the smoked salmon. The Jews and Arabs are the ones who brought eggplant to Italy.

All the baking — the rye, challah and matzoh is done here. Everyone gets a small challah with honey butter when they sit down.

Do you think your appearance on “Top Chef” Season 4 helped you to open a restaurant?

That had no bearing on this whatsoever. I think it can help and it can hurt. It helps if you’re selling a concept to investors. But it can definitely hurt. For one thing, I was branded as the Italian pasta-making woman from Brooklyn, and that’s not true at all, I never worked in an Italian kitchen.

Why hasn’t “Top Chef” done a Jewish cuisine challenge, or, even better, a Kosher one?

Jewish food is not in the masses at all. There isn’t a Jewish cuisine right now aside from Jewish deli. But I do think it would be really interesting to try something Kosher. That would be a great challenge.