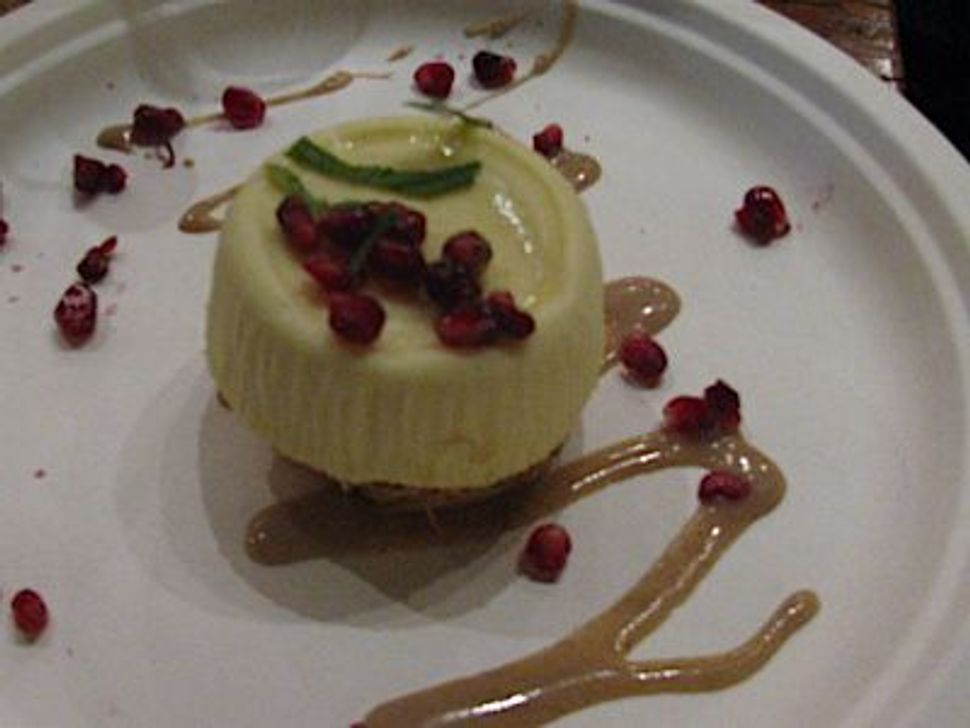 It sounds like the perfect all-star afternoon, or the beginning of a highly competitive television series. Rather, these were the components of the first annual “Cultural Feast” lunch at the Schmooze Conference on January 11 at City Winery in New York City. The lunch featured seven different Jewish artists, each of a different medium, seven skilled kosher chefs and seven kosher wines from New Zealand to France. The idea was to pair each course with “a nibble of culture and [a] taste of wine,” said organizer of the lunch Michael Dorf.

True to his roots, Dorf, whose City Winery makes a number of wines in-house, and hosts wine pairing and tasting events, developed the concept of the meal around the arc of wines typically served at tasting meals. We “start with lighter wine and move to robust red wine, then dessert wine,” he said.

To that, he added performers and artists who were participating in the conference plus dishes prepared by some of New York’s most skilled kosher chefs. In the end, though, the meal and artistic presentations didn’t follow the arc as successfully as the wine. (One dish, chili and chocolate short ribs, wasn’t even served when organizers realized other chefs had slated dairy courses both before and after it. Two somewhat similar arugula salads also appeared during the meal).

The pairings between the comestibles and performances were tenuous at best. Comedian and actress Jackie Hoffman kicked off the event as “a bubbly start” to the lunch, which was paired with a sparkling wine, a Herzog Blanc de Blanc Brut. For the second course, James Beard Award Winning Chef Jeff Nathan of Abigael’s matched a dish of green tea noodles with carrots, cashews and Napa cabbage to the noodle-like quality of Sidra Bell’s dance company, which performed during the course.

Perhaps the most effective grouping was a delicate Yemenite mushroom lentil salad prepared by Michael Gershkovich of Mike’s Bistro with Israeli and Yemini singer Achinoam Nini (NOA) and a fusion cab/merlot/cab franc blend by Segal. Apart from this course, however, the sensory overload of the program kept diners (or should we say viewers?) from truly being able to appreciate any of the art forms on display – edible, audible or observable.

In most of the courses, one of the players stole the show. The pinot noir made in-house with Oregon grapes showed City Winery’s adept skill at creating a complex kosher wine. Dan Lenchener, of Manna Catering, also impressed during the final course with his cheesecake with a shredded crispy kataifi crust, served with a Gewurztraminer during a screening of scenes from the documentary Budrus.

While the afternoon had its highlights, a great meal or performance deserves all of our attention. Eating or drinking well goes beyond taste. The smell, appearance, texture and even sound of our food influences how we experience it. Wine with its complimenting notes enhances that sensory experience. So too, good art and performance require the viewer or listener to engage with more than just sight or sound – the experience can evoke taste and feeling. By overwhelming the senses, we are unable to appreciate the meal or the art forms fully. Just as too many cooks spoil the broth, too many talented chefs, vintners and artists make for a vibrant but messy afternoon.