A World of Dishes for Tu B’Shvat 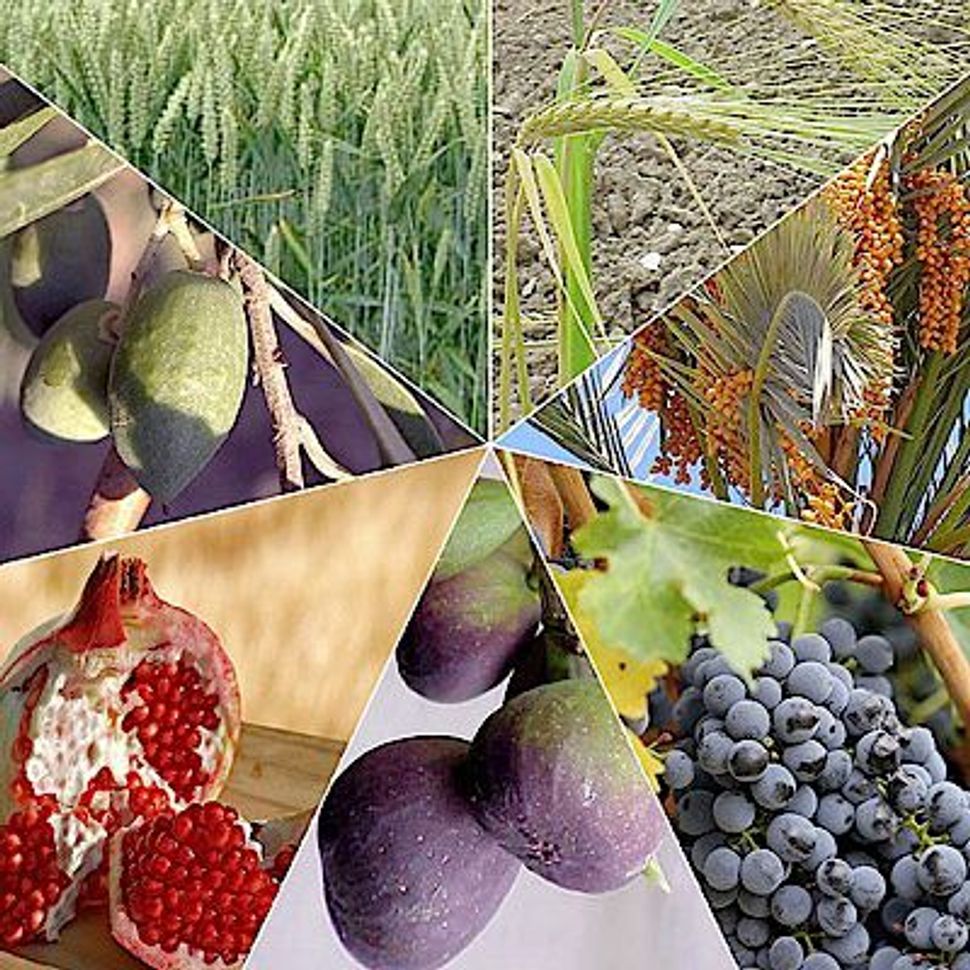 Shivat Haminim: The Seven Species of Israel Are Used To Celebrate Tu B?Shvat. Image by Wikicommons

Sephardim, partially due to the warm climate and early growing season in their locales, have long manifested a deep devotion for the day, which they call Las Frutus (“The Fruit”). To celebrate, Sephardic families customarily visit relatives where they are offered a veritable feast, appropriately containing an abundance of fruits and nuts. The children are encouraged to not only partake of the spread, but to take bolsas de frutas (“bags of fruit”) home with them.

The Kabbalists of 16th century Safed developed a Tu B’Shvat Seder based off of the Passover Seder to celebrate the holiday. Four glasses — each wine a different type — were served and at least 12 fruits and nuts were sampled. Others increase the number to 15, corresponding to the numerical value of Tu. Iraqi Jews further expanded on the concept, increasing the number to a minimum of 100 fruits, nuts, grains, and vegetables.

In the colder northern climates of Ashkenazic Jews, though, the holiday was barely celebrated historically, in part because of a lack of fresh fruit mid-winter. That changed in the first part of 20th century with the establishment of agricultural settlements in Israel and the need to plant trees to rebuild the land; the holiday took on new significance throughout the Jewish world.

There is a widespread custom of eating the Shivat Haminim (“Seven Species,” the five fruits and two grains for which the Land of Israel is praised): wheat, barley, grapes, figs, pomegranates, olives, and dates. In addition, many people eat other fruits and nuts mentioned in the Torah or associated with Israel, most notably bokser (carob), raisins, apples, quinces, walnuts, and pistachios. Since almond trees are traditionally the first to bloom as well as biblically significant, their nuts also hold special meaning on Tu B’Shvat.

Below are recipes for a menu of Israeli Wine and Fruit Soup, Moroccan Orange Salad and Couscous With Dried Fruit and Nuts, which together make a healthy, fresh and fitting start to the tree’s New Year.

If you prefer whole fruit, add the oranges to cooled soup.

1) Bring all ingredients to a gentle boil, stirring occasionally.

2) Lower heat and simmer for 10 minutes.

1) Divide the lettuce and watercress between serving plates or place on large platter.

2) Toss together the oranges and onions and place on greens.

3) Combine all the dressing ingredients and drizzle over the salad.

2) Stir the sugar and cinnamon into the butter. Pour over the couscous, tossing to coat. Stir in the raisins, dates, apricots, almonds, and pine nuts. Gradually add enough of the almond milk to moisten the couscous.

3) Mound the couscous on a large platter and sprinkle with the additional cinnamon.

Gil Marks, a rabbi, writer, and food historian, is the author of numerous books, including the new Encyclopedia of Jewish Food.

A World of Dishes for Tu B’Shvat