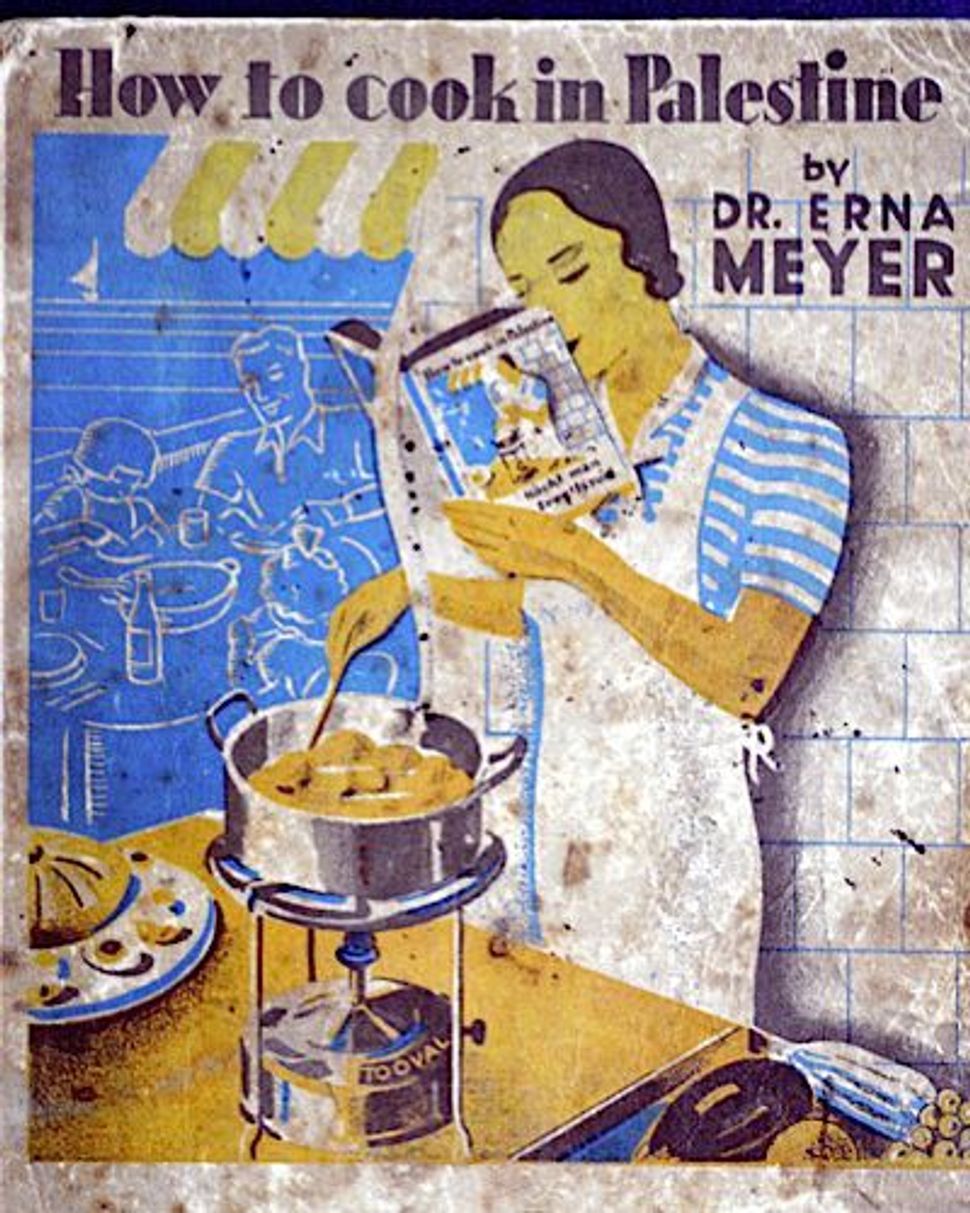 It’s hard to believe that a cookbook published in 1936 would have much relevance to today’s cooks, other than as a culinary artifact. But Dr. Erna Meyer’s “How to Cook in Palestine” — widely regarded as the first “Israeli cookbook” — offers lessons and recipes that are just as valuable to cooks in 2011 as they were 75 years ago. From eating locally and naturally to useful tips on saving money, Meyer was ahead of her time. Published by the Women’s International Zionist Organization (WIZO), during the British mandate, the cookbook provides unique insight into the roots of Israeli cuisine and illustrates how it started as a practical mixture of traditions from Europe, ingredients available in Palestine and economic considerations.

Meyer, a transplant from Germany, understood the desire to maintain culinary traditions from home, but saw the realistic need to adapt to Palestine. In English, German and Hebrew, she urged immigrant housewives, mostly from Europe, to adapt to their new homeland by using local ingredients such as eggplant, vegetable marrow (a zucchini-like vegetable), ketchup, and olive oil that were widely available to them.

She explains how to use local produce, spices, and equipment, saying it would make a healthier, tastier, and more economically run kitchen. “We housewives,” Meyer urges, “must take an attempt to free our kitchens from European customs which are not applicable to Palestine. We should wholeheartedly stand in favour of healthy Palestine cooking.” Similar to Israeli cooking today, Palestinian cooking relied heavily on a diet of fresh and stewed vegetables, chose oil over butter, and used Middle Eastern spices to make food livelier.

At the same time, “How to Cook in Palestine” wasn’t asking people to leave their heritage at the door. Rather, Meyer had a vision for an Israeli cuisine that would integrate the old and the new. “Once we know how to take advantage of the natural products of Palestine and in addition utilize our knowledge of European cooking,” Meyer explains, “we will bring about great changes in our method of cooking and will be able to vary our dishes.”

Indeed, in her recipes and suggestions you can begin to see the start of an Israeli cuisine. She urges housewives to embrace eggplant and forgo the misconception that they are overly bitter. Meyer also introduces mint as “an inexpensive green on the market.” She suggests adding mint to salads, “to give it an entirely different taste,” using it to spice vegetables and meat sauces, and to make a “delightful, thirstquenching [sic] tea, when dried.”

Similarly, Meyer devotes an entire chapter to the benefits — both health and economical — of cooking with oil as opposed to butter. “All housewives should, for the benefit of their families” she pleas, “be made to realize the advantages of cooking with oil.” For those who did not care for the flavor of olive oil (hard to believe, but it was apparently a common distaste), Meyer recommends Meged oil, which has the same cooking properties as olive oil but was “free of the taste peculiar to that oil.” Clearly her suggestions (often phrased more as pleas) worked — today eggplant and mint are two of the central ingredients in the Israeli culinary cannon and far more oil than butter is consumed.

Meyer repeatedly recommends making vegetables more central to every meal and offers meat substitutes for a variety of dishes from “liver” made out of eggplant to “meatballs” made out of soaked bread. Although her suggestions came from a place of economy rather than sustainability, they’d fit right in with Mark Bittman and Michael Pollan’s contemporary cries to consume less meat.

Similarly, Meyer leads the charge on an early eat local campaign, begging housewives to use local rather than imported products and advocating for community and windowsill gardens. She has no shortage of recommendations for what herbs and vegetables would grow in a simple tin can, and advises new Israelis to try planting seeds of all kinds.

While some of the recipes are best left in the past (I’m thinking of a particularly distasteful recipe for wine soup with eggs) many have a place at the modern table. A recipe for pumpkin soufflé is elegant in its flavor combination (pumpkin, white wine, nuts) and simplicity, and a dish of eggplant and sour cream is reminiscent of the mezzes found at many an Israeli meal. It would seem unlikely that a cookbook written 75 years ago would hold anything more than insight into the past. But “How to Cook in Palestine” is also a glimpse of the future.

2½ okieh* pumpkin, sugar, white wine, 50 grams kokosin**, 2 egg yolks, 2 stiffly beaten egg whites, 10 grams nut crumbs. Cut pumpkin in small pieces or grate it on a coarse grater add 2 Tbsp. sugar and stew on a small flame in a covered pot. When soft stir the puree add a little white wine and sugar to taste and cook until the liquid is absorbed. In the mean time the kokosin, 2 Tbsp. sugar and egg yolk are well stirred. Add the cold puree to 10 grams of ground nuts. To every 3 Tbsp. of pumpkin take 2 Tbsp. of crumbs. Add lemon juice and lemon peel and stir in the snow of egg whites. Pour into a greased glass or porcelain dish and bake ¾ hour. Serve with white wine sauce or a light lemon cream.

3 okieh* egg plant, 1 spoonful of Meged***|, ½ onion, parsley, 1 spoonful of flour, 100 gr. of sour cream, dill. Chop the onion finely and fry in the oil until a golden brown. Add the chopped parsley, salt, and the egg plant, after having cut up same into small cubes. Sprinkle the flour over the egg plant. Stew for a few minutes, then add a little water and continue stewing over small fire with lid closed, until done. Then add finely chopped dill and before serving mix in the sour cream.