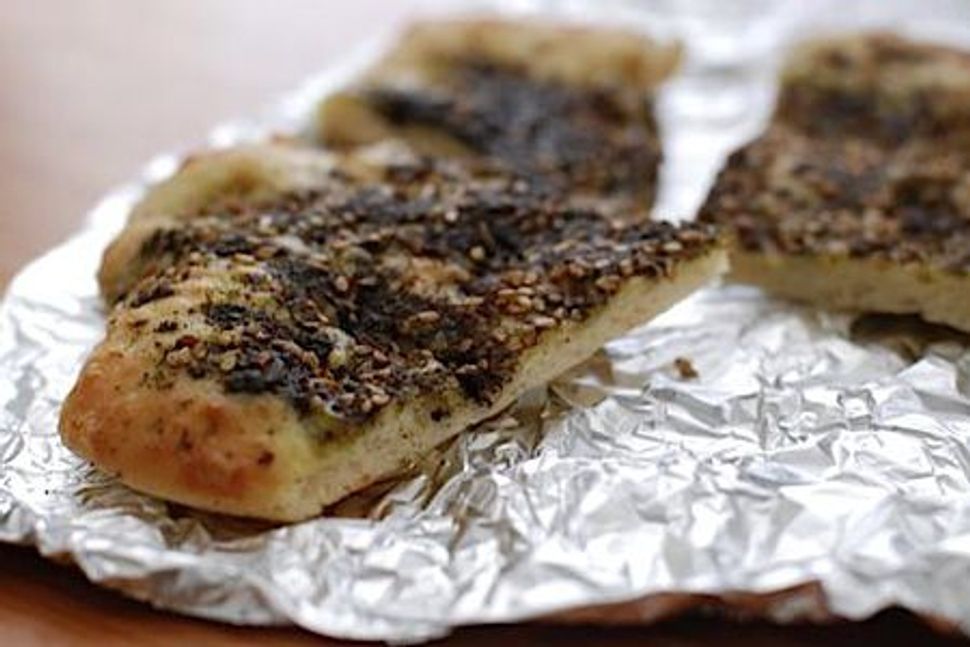 Za’atar is an herb. Sorry – it’s not a specific herb, but one of any number of herbs in the hyssop family. Scratch that: it’s a combination of herbs. But wait, sometimes there are sesame seeds. Actually, it’s a paste made with some type or types of herbs, sesame seeds, and lots of olive oil.

In reality, za’atar is all of these things. There is a bush that grows in the deserts of Israel known as za’atar. The bush is most likely a member of the hyssop family, though some call it savory or wild oregano. It’s small and somewhat rough leaves are a fusion wild oregano and thyme flavors.

The za’atar you buy in the spice shop is usually a blend of different herbs. According to Lior Lev Sercarz, master spice blender and owner of New York-based spice shop La Boîte à Epice, the most traditional elements of a za’atar blend are za’atar leaves, sumac, sesame seeds and thyme. The color of these blends varies from forest green to dark, deep red-brown, and the flavor ranges from woodsy and deep to tangy and a bit nutty. It all depends on the balance of herbs in the blend, and every country — nay, every spice blender — makes it a bit differently.

Za’atar has many uses. Food carts and hole-in-the-wall lunch joints across the Middle East use it as flavoring for labneh, a thick and tangy sheep’s milk yogurt. In Lebanon, the traditional salad of tomatoes and ripped pita called fattoush is topped with a dusting of za’atar. The Druze, a community living primarily in the north of Israel, use za’atar in a salad of red onions, lemon, and olive oil. But in countries across the Middle East, from Israel to Egypt to Syria and Lebanon, za’atar’s most common application is as seasoning for bread. If you order a “laffa im za’atar” from one of the stalls in an Israeli shuk (open-air market), the stout man behind the counter will hand you a hot, floppy flatbread shmeared with a layer of za’atar paste, made of crushed herbs, sesame seeds, salt, and plenty of olive oil — an addictive combination.

Here’s the irony: pinning down the origins of this spice was actually more complicated than making that delicious flatbread. Laffa im za’atar is a snap to make, no two ways about it. If you can’t find a za’atar blend at a specialty or Middle East grocer, I’ve provided a recipe for homemade za’atar, which is my take on the Israeli za’atar blend I ate regularly during my time in Jerusalem. The rest is simple: make flatbread dough, stretch it on a sheet pan, drizzle it with olive oil and sprinkle with za’atar, and bake in a piping hot oven until bubbly and browned. If you’re staying really traditional, you’ll let the thing cool and eat it as an on-the-go snack. That’s if you can resist a bite of za’atar-coated bread right out of the oven, which I cannot.

2) Add water and stir until blended. The dough will be quite sticky. Cover the bowl with plastic wrap and let rest in a warm place for about 2 ½ hours.

4) Spread 1 tablespoon olive oil on each of 2 rimmed baking sheets.

5) Separate risen dough into 2 pieces, and using a light touch, start to spread dough into circles on baking sheets.

6) When the dough balls have been spread into circles about 8 inches wide, sprinkle 1 1/5 tablespoons of za’atar onto each. Drizzle 1 tablespoon olive oil overtop.

7) Bake flatbreads for 10-12 minutes, until browned and crisp. Serve warm or at room temperature.