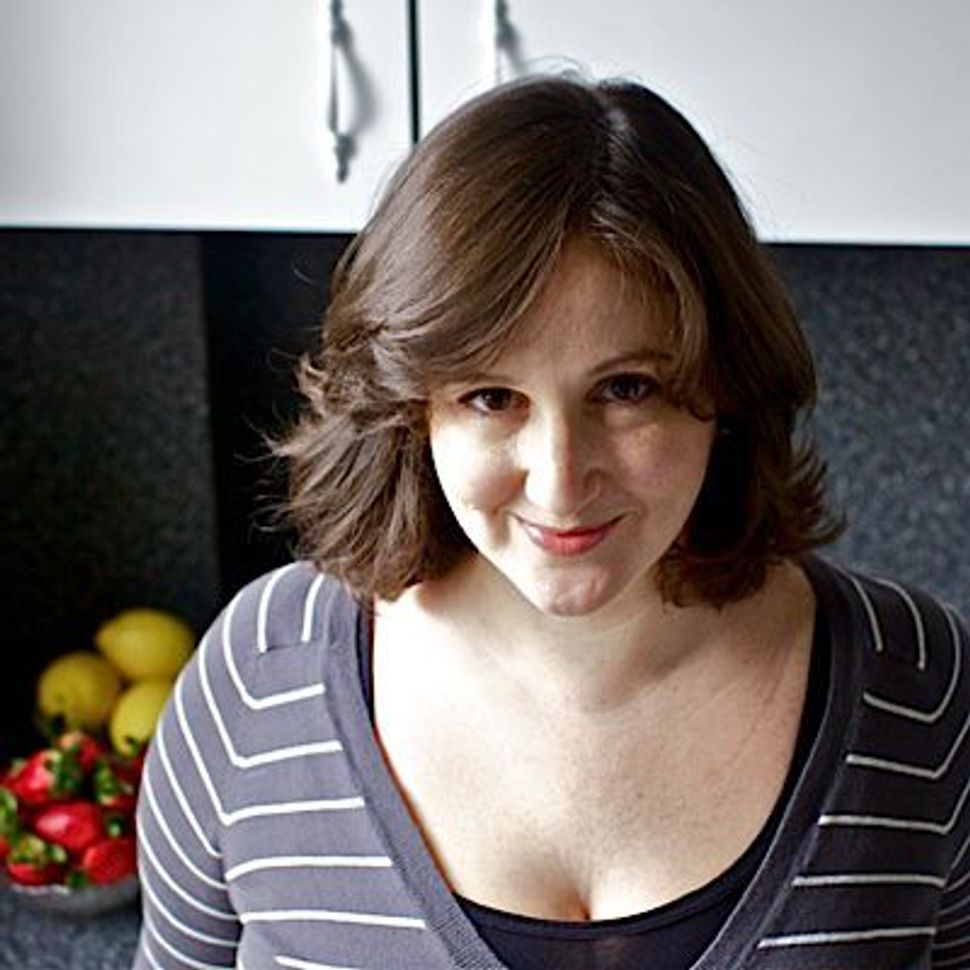 Image by Courtesy of Deb Perelman

There is no shortage of home cooking blogs out there. But Deb Perelman’s Smitten Kitchen, a relate-ably personal, yet eloquent blog, is one of the lucky few to have gained a large and loyal following. In fact, it’s her blog’s popularity — she has about 4 million unique visitors a month — that led Perelman to the holy grail of food blogs — a book deal.

And with Knopf no less. “It’s so exciting because they published Julia Child. I don’t know what they’re doing with the likes of me,” the always-humble Perelman said.

Perelman says the cookbook, which should be out in spring or fall 2012, will be a lot like her site, with stories and personal introductions to the recipes. “It’s a conversation,” she said. Perelman will often start a post on a subject that seems to have nothing to do with food (case in point: a recent post about how messy her closet is), and end it all with a fantastic dish (in this case, a dijon chicken recipe she found while clearing out said closet).

Perelman takes all of her own drool-worthy, “Bon Appetit”-ready photos, and will do so for the book as well.

The cookbook will consist primarily of new recipes, with several Jewish dishes included. “I am aiming for a family brisket recipe, a fresh spin on challah and any sweet recipes that can be easily tweaked for Passover will be noted,” she said.

We chatted with Perelman, 34, about her blog, her mom’s famous Passover cake named after an expletive and the fact that a noodle kugel may have been responsible for her existence.

Lucy Cohen Blatter: What made you start a cooking blog?

I don’t have any professional training. I’ve always really enjoyed cooking but I didn’t do a whole lot of it when I was single. It was really when I started living with my husband that it turned into something.

I was losing track of recipes, and I really wanted to adapt them. I liked building up my recipe database and sharing.

Is this now a full-time job for you?

Yep, it has been for about three years. Before this, I was in journalism, writing for a B2B magazine. My stories were really boring. Don’t google them or you’ll fall asleep.

Are you surprised to be writing a cookbook?

I fought it tooth and nail. I really love the Web and I love the medium. It works well for me, so I hadn’t been bitten by the cookbook bug. My agent was shopping around the book for me and I explained to her that it was a waste of time. But, an hour after meeting with her, she convinced me to write a cookbook. I called my husband and said, “I’m going to write a cookbook!”

Why do you think your blog took off when so many others don’t?

I don’t think there’s a magic formula. I am just keeping things realistic and honest. My strong point is not always everyday meals. I hope when someone’s looking for something a little special — but not hours and hours of work — they come to my site. I try not to enlist fussy ingredients, though; I don’t want to put up walls between the recipes and the people who use them.

Let’s talk about Jewish food. Did you grow up eating a lot it?

I have learned through my blog that I haven’t grown up with as much Jewish food as I thought. It wasn’t a central part of how we ate. We had matzo ball soup about twice a year and brisket for special occasions. My mom’s favorite food of all time is noodle kugel so she’ll take any excuse to make that. But I had never heard of half of these things, like kasha or jelly donuts.

Tell us more about your mom’s noodle kugel.

It’s a sweet one, with egg noodles and cottage cheese. It was a recipe from my father’s mother. My mother tried it before they were married. She asked for the recipe and my father’s parents said, “Only if you marry my son.” My mother always says she married him for the noodle kugel recipe.

Do you cook Jewish food often?

We live in a puny enough apartment, that we normally go to the ’burbs for the holidays. But I started making brisket last year. There’s a variation of my mother in law’s [recipe] coming in the cookbook. It has a lot of ingredients.

I make the Passover desserts. I have a whole archive of flourless recipes. When I started making “Passover” recipes, I found them all to be terrible. So I stopped making them and was on the lookout all year long for recipes that use little flour.

My mom makes a flourless chocolate cake roll, that’s almost like a yule log. As a kid we’d call it the “shit” cake cause my mom would curse so much while she made it. We roll it with whipped cream. It’s so good.

There’s also a matzo brittle that’s great, which we call “Chocolate Caramel Crack.” (God, our names for things are so bad.) During the year, we use saltines, but on Passover we use matzo. You cover matzo with caramel and chocolate. It’s very easy to make and way more fun than macaroons.

Do you have an all-time favorite Jewish dish?

I actually really like matzo ball soup. I also love making latkes. I’ve made about a million different variations over the years… I’ve done them with sweet potatoes and wasabi cream. I also once made Indian-spiced fritters with curry lime-yogurt on top. They’re so different than potato latkes, but it’s the same idea. This year, I made apple latkes. They’re not very sweet on their own, but you can also squeeze out the juice to make an apple-caramel sauce.

Does that mean you like your Jewish food less traditional?

I mostly like Jewish food the traditional way but I think that there [are ways] of improving it that don’t necessarily compromise what was important about it. We now have an amazing range of ingredients at our disposal… so we can do things that our grandmothers may not have been able to. Dried fruit doesn’t always have to be raisins; oil doesn’t have to be vegetable oil… dairy dishes can be made acceptable for meat meals sometimes just by swapping coconut milk for cream; these are the kinds of changes that get me thinking.

Where do you get the inspiration for your recipes?

I get inspiration from a mix of places. Sometimes a dish at a restaurant, sometimes an old “Gourmet,” sometimes an out-of-print cookbook … and sometimes it’s just a description or photo of a dish that I imagine will taste one way and it doesn’t and then I get obsessed with making it taste the way I thought it should. I get a lot of ideas from commenters too, who will say things like “I once had this dish and it was served with ‘x or y’ and I realize it would be perfect that way. It’s really fun to be able to have an ongoing conversation with enthusiastic home cooks.