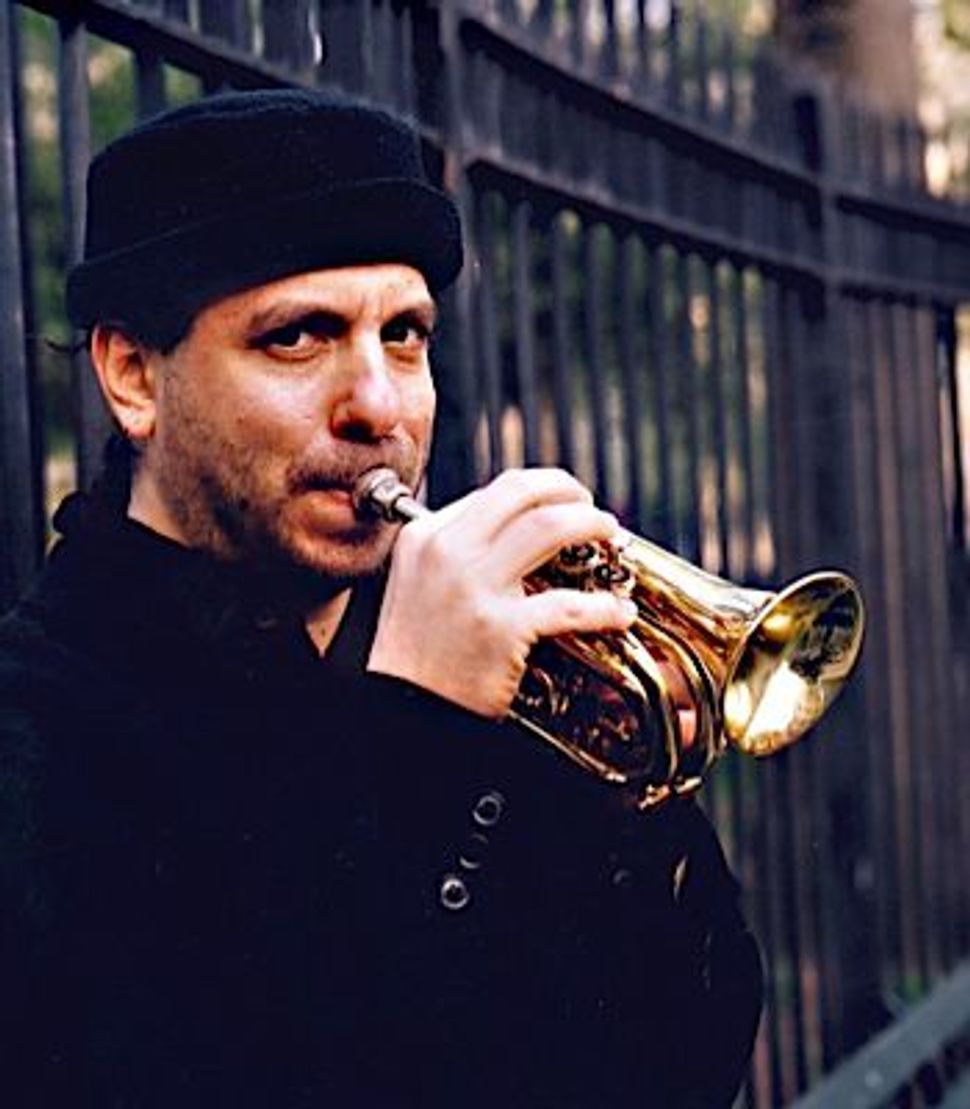 It is accordionist Sklamberg’s and trumpeter London’s love of food — traditional Ashkenazi food, in particular – that has brought them together with celebrated Yiddish singer Adrienne Cooper for two performances of their unique show, called “Esn,” (Yiddish for “Eating”) in Northern California this week (February 11 at the San Francisco JCC and February 13 at the Oshman Family JCC in Palo Alto).

In the course of just 90 minutes, the three will flex both their musical and culinary muscles as they sing 11 food-themed songs in Yiddish, English and liturgical Hebrew, recount family stories about being in the food business, kibitz about Jewish cookbooks — and make matzo brei, tzimmes and challah on stage for the audience to taste.

“Esn” draws upon the “enormous tradition,” as Cooper put it, of Yiddish food-related music. The Jewish loves of music and of food have gone hand in hand for generations. Eastern European Jewish babies were weaned on Abraham Goldfaden’s “Rozhinkes mit Mandlen” (Raisins and Almonds) lullaby as early as the late 19th century. And later, in the 1930’s, ‘40s and ‘50’s American Jewish comedic songwriters and performers like Mickey Katz (father and grandfather of actors Joel Grey and Jennifer Grey, respectively) paid homage — or skewered, depending on who you asked — Ashkenazi foods and eating habits through song. Not all traditional Yiddish food songs were upbeat, however. Many reflected the state of constant hunger of poor European Jews, who sang of eating boiled potatoes while fantasizing about more sumptuous fare.

“Esn” includes all of these. “We cover everything: from the calendar of Jewish holidays through song, to a Soviet ‘song of bread,’ to WWI songs about hunger, to humorous… Catskill menu recitations, to family songs about the transmission of love via food,” Cooper said.

The show, originally commissioned a decade ago by the International Jewish Music Festival in Amsterdam, has been performed nine or so times since then — in Houston, Los Angeles and New York. Although they worked with a dramaturge to polish their script, the process of putting together, “Esn” was “basically our lives,” noted London. “We’re not actors, but we cook all the time… It’s just who we are, so the creation of ‘Esn’ was really sort of a ‘hey gang, let’s put on a show’ moment.”

Each of the performers takes charge of preparing a different dish on stage. Cooper cooks three types of matzo brei — one sweet, one savory, and one both savory and sweet. “It’s a kind of matzo brei throw-down,” she joked. Sklamberg, a talented baker, does a challah baking demonstration and uses any leftover dough to make chocolate babkah.

London chose a dish that best fit his talents and outlook. “I wanted something where you can mess around with the recipe,” he reflected. He opted for tzimmes, which is “a mixture — a little bit of this and a little bit of that.” In fact, London views tzimmes as a metaphor for the Jewish experience. “You can make it the Ashkenazi way, or make it spicy the Sephardi way. Ideally, a good tzimmes has a unified flavor, but you can taste each ingredient,” he mused.

Some will come to “Esn” to enjoy the food, others, to hear the renowned musical talents onstage. Either way, London finds that audiences like the show because “it’s real heimisch.” And you don’t have to be a Yiddish-speaking, Ashkenazi food-eating Jew to enjoy the performance. “It’s about finding a universality through a particularity,” London explained. “Ultimately, it’s about food, family and celebration.”