Matzo Ball Gumbo and Other Dishes of the Jewish South 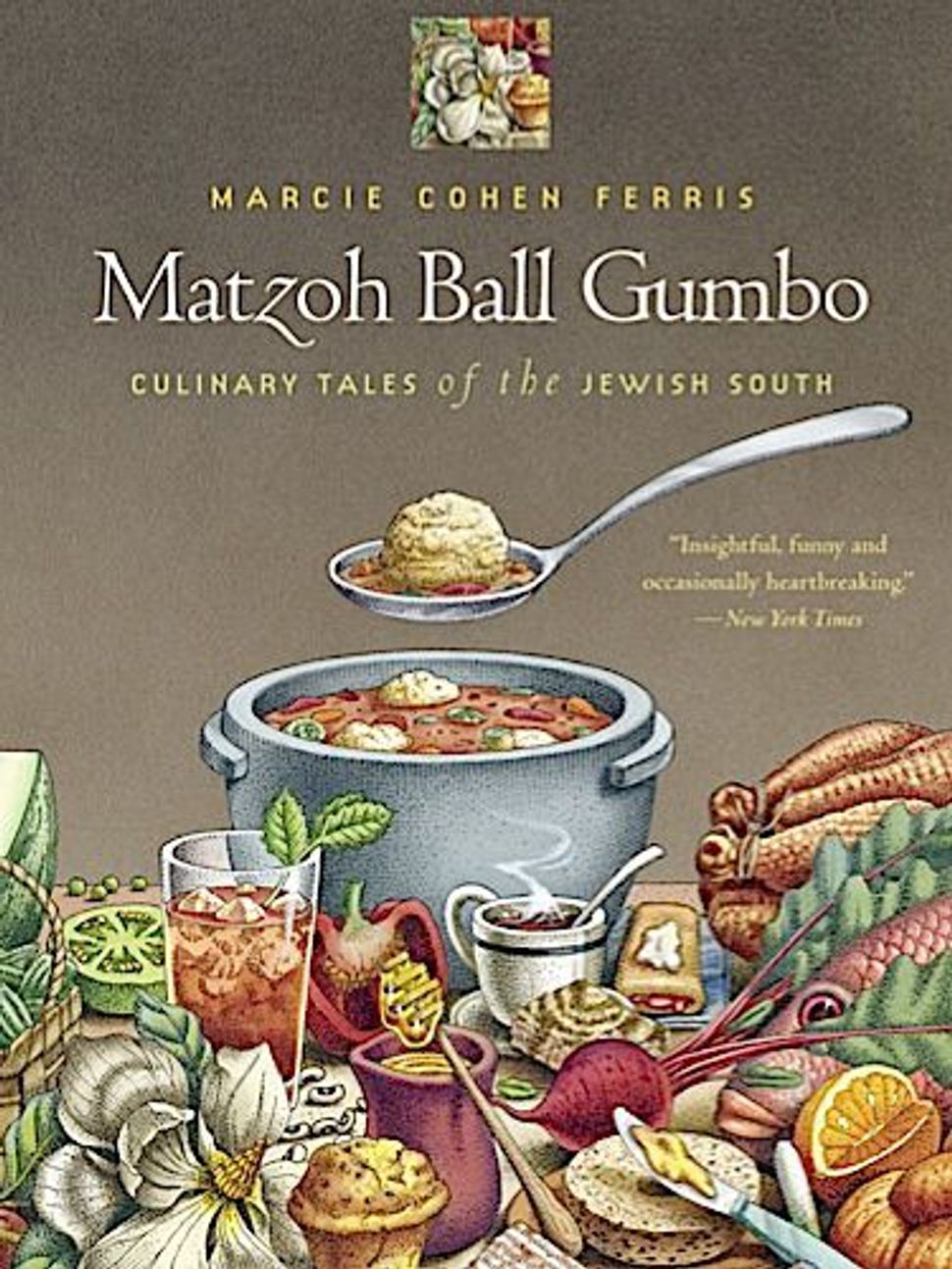 When you picture Southern cooking, visions of pork-laden collard greens and BBQ pork ribs probably come to mind. While pig is undoubtedly a staple of Southern cooking, many Southern Jewish chefs have managed to make traditional foods sans treyf and even developed some of their own culinary traditions, using the South’s bounty of fresh produce.

Others have not. Take the website BBQ Jew, which describes itself as a site that “shows what happens when the ‘Chosen People’ choose pork. North Carolina pork barbecue to be specific.” It touts “recipe” for dishes such as “Gefilte Pig” (a jar of pickled pigs feet with a gefilte fish label) and embraces all things swine-y.

Kosher or not, there are a significant number of Jews in the South, about 455,000, according to the Institute of Southern Jewish Life. (If you count Southern Florida that figure jumps to 1,068,000). While Jews only make up about 1% of the region’s population, there’s a lot of growth, particularly in the big cities, such as Atlanta, Charlotte, North Carolina and Austin, Texas.

And where there are Jews, there will be delicious Jewish food. We caught up with Marcie Cohen Ferris, author of “Matzoh Ball Gumbo: Culinary Tales of the Jewish South” and a native southerner, to discuss how Jews of the south are making the regional cuisine something all their own. Cohen Ferris who is also a professor of the Jewish South at UNC, shares her recipe for gumbo with a Jewish twist below.

Lucy Cohen Blatter: What are some of the signatures of Southern cuisine in general?

Marcie Cohen Ferris: Southern cuisine is really about the taste of the region. It’s really about vegetables more than it is about meat. The cuisine relies on corn, sweet potatoes and greens.

There’s a great baking tradition in the South, too, with classics like biscuits, pound cakes, chess pies [made of custard] and pecan pies. Pound cakes are often part of Shabbat meals, too. They’re completely Southern but Eastern European, too.

The South seems like a tough place to keep kosher.

Historically there have been huge issues with kashrut. Though every congregation started traditionally, many moved away from kashrut because they didn’t have access to the food or to shochets. The South was a rural, agrarian society, so many people had to learn to be shochet themselves.

But in the South, to not eat shrimp and not eat pork, barbecue and sausages, is to really separate yourself out. I think because of the code of race in the South, it was always really important for Jews to assimilate and to appear as Southern and as white as possible. People paid attention to what you ate, both in the 19th and 20th Century, and today.

How do Jews deal with the fact that many signature southern dishes aren’t kosher?

When I was growing up, Orthodox people were the only ones not putting a little ham hock in beans. My grandmother used to say “just a little.”

What kind of hybrid Jewish-Southern dishes have evolved?

Well, there were many Sephardic Jews who moved to Atlanta and Montgomery, Georgia. They came from the Mediterranean world. Black-eyed peas with tomatoes is a favorite dish for them. There’s also pink rice — that’s white rice simmered with tomatoes. People also make brisket here, but here people will do it with a barbecue twist.

I grew up with fried chicken for Friday Nights. On occasion, my mother would ask the African American housekeeper who worked for us if she could make us fried chicken.

At Rosh Hashanah dinner, there will be kugels and butter beans. Southern women have grown up with a lot of soul food, and that shows in their cooking.

What Southern-Jewish dishes would you recommend our readers make?

Matzo ball gumbo can be a nice dish for the winter. You make a chicken gumbo and flavor it with smoked turkey bone. Then you cook and add matzo balls separately. And you add a little more spice to the balls, to make it Southern. You can add cayenne, ginger, chives and onion.

I also like to “Southernize” kugel. You can make a sweet potato kugel and add peaches in the summer. For rugelach, too, you can add homemade blackberry jam and use pecans instead of walnuts.

Are there any famous Southern Jewish chefs or restaurateurs we should know about?

Yes there are. Karen Barker at Magnolia Grill in Durham, North Carolina is Jewish and she’s a wonderful pastry chef. She doesn’t make Jewish food, but she’s wonderful.

Karen Blockman Carrier, who owns several well-known restaurants in Memphis grew up in Orthodox in that city. [Carrier has said she never tried pork or shellfish before she was 17 and left her parents’ home. She’s opened several Mempis hotspots including do Sushi, Mollie Fontaine Lounge, The Beauty Shop].

We’ve got to ask you — a Southern woman — what do you think of Paula Deen?

You know, I respect her as an independent business women. She’s an incredible entrepreneur. Her Southern divanees is obviously part of her business and her identity.

1) In a small nonstick skillet, heat 1 tablespoon of the oil over medium heat. Add the onion and cook, stirring often, until tender, 2 to 3 minutes. Stir in the parsley and Creole seasoning and cook, stirring, for 30 seconds.

2) Scrape the onion mixture into a medium bowl and let cool slightly. Add the eggs and remaining 1 tablespoon oil. Mix with a fork until the eggs are well broken up. Add the matzah ball mix and stir until blended. Cover and refrigerate for 20 minutes.

3) Meanwhile, fill a large saucepan with water. Cover and bring to a boil. Moisten your hands and form the matzo ball mixture into 12 balls, using a heaping tablespoon mixture for each.

4) Add a big pinch of salt to the boiling water and drop the matzo balls in. Cover, reduce the heat to low, and simmer for 15 minutes, or until cooked through. Serve soon, or with a slotted spoon, transfer to a container. Cover and refrigerate until ready to serve. Reheat matzah balls in soup or in the microwave.

If you keep kosher, make the gumbo with kosher smoked beef sausage or knockwurst. If the sausage is not spicy, you will need to pump up the heat. Try adding 1/4 teaspoon more cayenne at first. When the gumbo is almost done (and the chicken is cooked) taste the sauce. If it is not spicy enough, add more cayenne to taste. Let it cook for a few minutes then taste again. Thanks to my Louisiana friend Denise Broussard for her gumbo guidance and inspiration.

1) In a heavy medium skillet, heat 3 tablespoons olive oil over medium heat. Add the okra and cook, stirring often, until tender and starting to brown, 12 to 15 minutes. Set aside.

2) Heat 1 tablespoon oil in a large nonstick skillet over medium heat. Add the sausage and cook, stirring often, until browned, about 7 minutes. With a slotted spoon, transfer to a bowl.

3) Season the chicken thighs or breast chunks with 1 teaspoon kosher salt and 1/2 teaspoon black pepper. Add 1 tablespoon oil to the drippings in the skillet and heat over medium heat.

4) Add about half of the chicken. Cook, turning once, until lightly browned, 2 to 4 minutes. Remove to the bowl with the sausage. Repeat with the remaining chicken, taking care that the drippings don’t burn.

6) Transfer to a Dutch oven and stir in the roux until well blended. Cook, stirring, over medium-high heat, until the roux is hot. Gradually stir in the chicken broth, tomatoes with their juices, water, and tomato paste. Bring to a boil, stirring often.

8) Taste and adjust the seasonings, if necessary. The gumbo will be even more flavorful the next day. If desired, serve with Creole Matzah Balls or steamed rice.

3) Remove from the oven and let cool in the pan. Some oil will float to the top. Store airtight.

Matzo Ball Gumbo and Other Dishes of the Jewish South