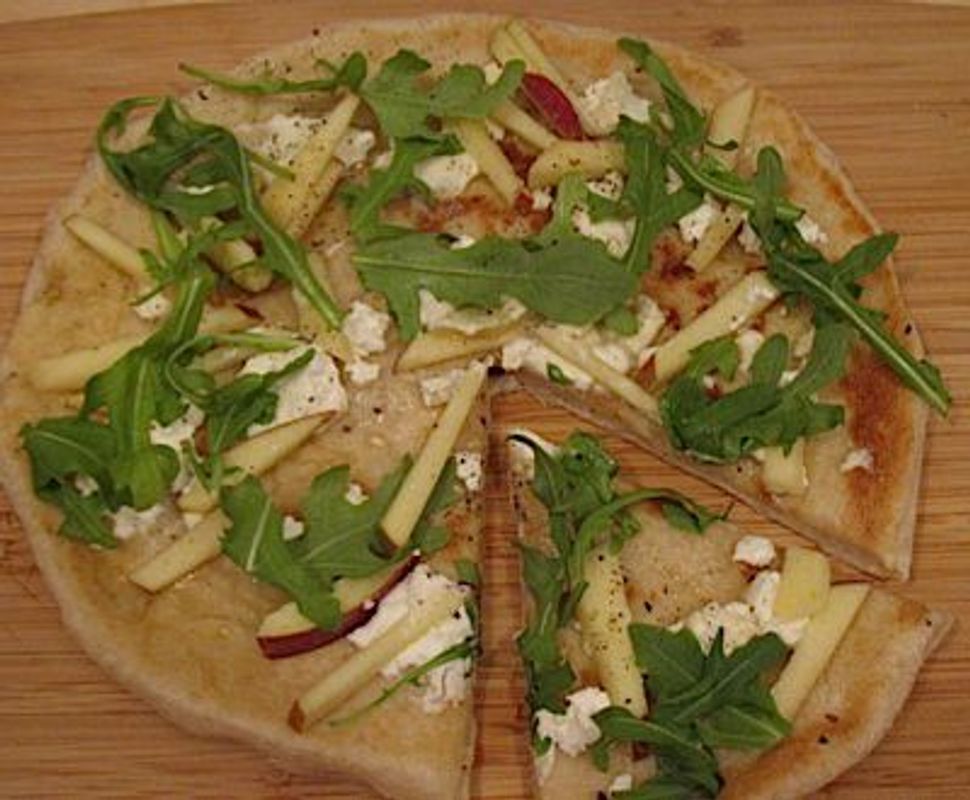 A Rosh Hashana pizza is covered with apples and honey, dotted with chevre and sprinkled with arugula and pine nuts

While a number of Jewish foods — the deli sandwich, matzo ball soup and even challah French toast — have woven their way into menu of modern American cuisine, Jews have no real claim to perhaps the most popular and beloved food in America, pizza. Yet it’s a staple of the American Jewish diet. In smaller Jewish communities with few kosher restaurants, pizza is often one of the few foods kashrut-observant families can enjoy outside of their home.

Pizza of course has its roots in Italy. But, there are also countless of other iterations around the globe. The formula: flatbread + toppings + heat = delicious dinner, is readily adaptable. Turkish cuisine, for example, has two traditional variations, lahmacun which is made with spiced lamb and tomatoes and pide which is formed into a long tipped oval and topped with a mixture of tomatoes, lamb and eggs. Other cuisines have invented pizza-like dishes in recent years. “Maybe it’s just another unpredictable result of globalization, but previously pizza-less countries have developed their own distinct creations,” Mike Clements explains in the LA Times.

Earlier this month, former JCarrot editor Leah Koenig, argued that many of the contemporary Jewish foods of America aren’t traditionally Jewish, but rather include splashes of Jewish or Israeli flavor or ingredients. To that end, we’ve come up with three variations of Jewish pizza you can make at home.

But before we begin, here are some tips: While making pizza dough from scratch is incredibly satisfying (you can take your frustrations on it as you knead) it is also time consuming, as the dough needs to rise. One of the better kept secrets of many American pizza parlors is that they will often let you purchase their dough for a nominal cost (a recent package of dough cost me $4 in Brooklyn) and Trader Joe’s sells packaged dough as well.

Baking the dough in a home kitchen oven, which is hundreds of degrees cooler than a pizzeria oven, sometimes results in a crust that is not fully cooked. I recommend cooking the dough on a griddle or on a flat cast iron skillet, which allows the dough to cook all the way through very quickly. The dough comes out crisp on the outside and pleasantly dough on the inside, with a fresh out of the oven taste.

All of these pizzas can easily be adapted to ingredients you have on hand and the method for preparing them is simple and fairly standard. Pour a small amount of olive oil onto the skillet and turn the burner on high. After rolling out the dough, place it on the hot skillet and cook for about 1.5-2 minutes, or until the bottom has started to brown around the edges, flip the dough and turn off the heat. Place your toppings on the dough and turn the heat back on for another minute or two, until the dough is cooked through. Serve piping hot with a salad for dinner and enjoy.

The Israeli Caprese: The popular Caprese pizza, named for the island of Capri that inspired its flavors, is smothered in pesto, covered with mozzarella and dotted with tomatoes, fresh or sun-dried. This Israeli variation keeps the beautiful tri-color scheme but shifts its flavors east to Israel and is a riff on a popular Israeli snack, flatbread with za’atar. The za’atar is easiest to spread when mixed with olive oil and made into a paste.

The Rosh Hashanah Pizza: Borrowing from the New Year’s flavors, this pizza, which was inspired by my friend Saskia Shuman, balances tart apples with a drizzle of sweet honey, spots of tangy cheese, spicy baby arugula and crunchy toasted pine nuts. Make sure to sprinkle the arugula on top of the other ingredients to keep it crisp.

Breakfast for Dinner Pizza: This inventive idea came from pickler, artisanal food maker and JCarrot contributor Blair Nosan. It takes the classic combination of lox and cream cheese and moves it to a pizza, which is dotted with fragrant dill and chopped red onion, which adds a slight bite. I was pleasantly surprised when I tested it at home on the flatbread which kept the fish mostly uncooked and not too salty. This pizza, unlike the others, is best when left to cool for a few moments.