My Jar of Hametz 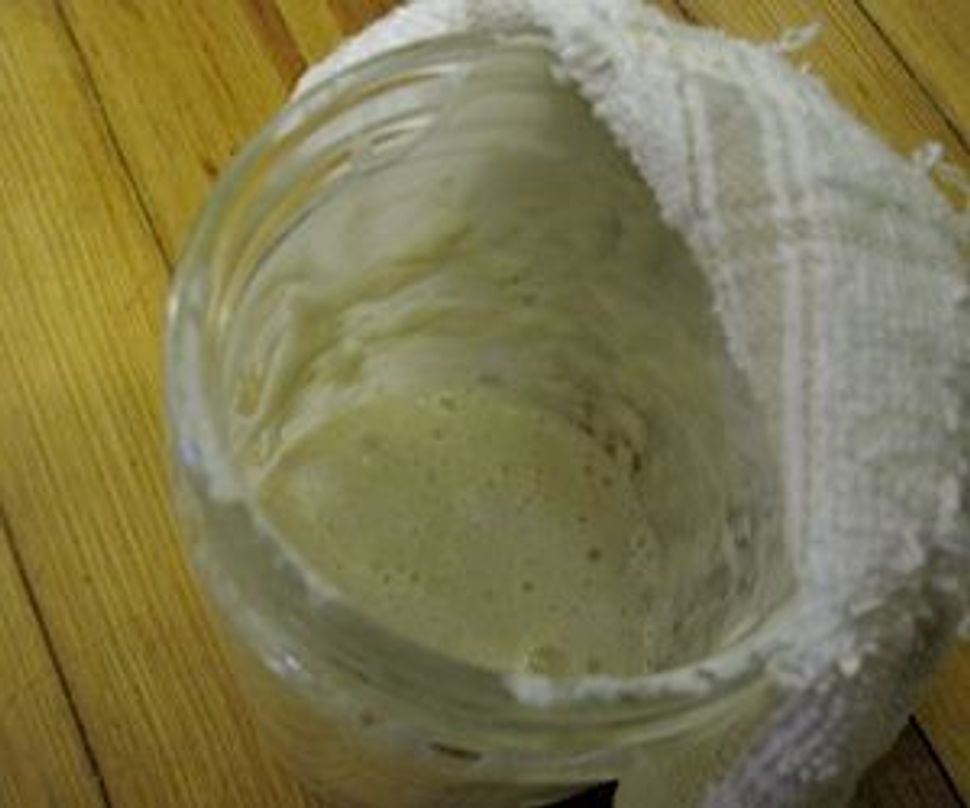 “Right after Purim,” a friend told me the other day, “we stop buying any more hametz [leavened bread products]. We have just four weeks to use up everything that we already have in the house!”

Her strategy is a common one. As the holiday of Passover approaches, a holiday where Jews search for, remove and burn every last crumb of bread or bread products in their house with a feather, many find themselves cutting back on the hametz early in anticipation.

As I prepare for Passover, my thoughts, like my friend’s, are on the crackers in the pantry, the crumbs in the breadbox, the extra loaf of challah I froze a while back. But standing in my kitchen, contemplating that crack that collects crumbs under the cutting board…my gaze comes to rest on a small jar on the counter, covered by a cloth, that contains the ultimate hametz: my sourdough starter.

I started keeping sourdough about four years ago, when I was living in the Connecticut Berkshires, and the wild yeasts harvested from the rolling hills of Lichfield County produced many a fine loaf of sourdough bread. But the jar of starter on my counter is just eleven months old — born just after last Passover. As someone who gets excited by words like “terroir” and any food with a story, I naturally swoon at the story of the Oregon Trail sourdough starter — which purportedly crossed the country in 1847, and is still alive and well and available for purchase over the internet from a friend of the pioneer’s descendants, over one hundred years later — or the 37-year old starter that a friend in Berkeley once shared with me, originally from a bakery in Oregon and carefully guarded by generations of protective bakers.

But those starters aren’t for me. I may have my great grandmother’s matzo ball recipe, and my other great-grandmother’s recipe for chocolate cake. But if either of my great-grandmothers ever kept a sourdough starter I don’t know about it, and I certainly don’t have it, because the notion of keeping the same starter year after year, in a strange and simple way, runs counter to thousands of years of Jewish tradition.

Where did this holiday of “getting rid of bread” come from? One way to understand the “festival of unleavened bread” is to relate it to the harvest calendar. Passover occurs at the time of the barley harvest. What better way to celebrate a new crop than to thoroughly rid your house of the previous one? A sourdough starter is simply a mix of flour and water, left a room temperature to ferment. Bakers would add it to a new batch of dough, then replenish by adding more flour and water, which would ferment in time to make the next loaf (just as they do today).

But if you’ve just brought home your new grain, and don’t want to mix it with the previous year’s grain, you don’t have the luxury of pre-fermented starter. You need to mix a new one, which will take anywhere from 3-8 days to become active and ready to make a risen loaf. In the meantime: you’re going to be eating pretty flat bread indeed.

God comes into the picture too. Fermentation is such a mysterious and important process that we have separate food blessings for two foods that it makes: wine and bread. Going a week without your trusted sourdough starter (and eating the uninspired flatbread that ensues) reminds the baker not to take the yeast for granted, and to celebrate the miracle that makes bread possible.

So, back to my sourdough. After the house is cleaned and the crumbs burned, I’ll bring the jar outside and pour it out on the compost pile. I’ll contemplate the miracle of yeast and bread. I’ll pledge to shed the puffed-up aspects of my character like arrogance and ego. And I’ll remember the year that we had together. And then it will be gone, like a vintage wine, my 2010-2011 sourdough starter will be no more.

My Jar of Hametz