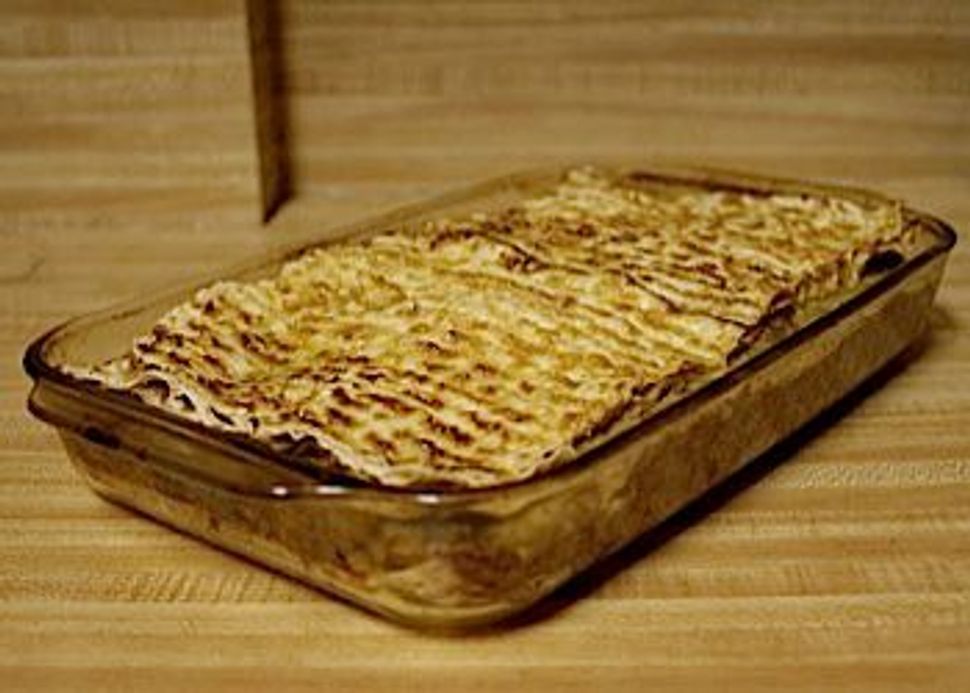 At the start of 2011 the world watched as the Egyptian people overthrew longtime dictator Hosni Mubarak. It is not often that we can so easily honor the Haggadah’s instruction that “In every generation one must look upon himself as if he personally has come out of Egypt.”

The Jewish community of Egypt dates back to the time of the prophet Jeremiah (587 B.C.E.) and has a long and storied presence in the country. By the sixteenth century it consisted of Arabic-speaking, North African and Spanish Jewish immigrants. Today, that community has all but disappeared, but the Jewish connection with Egypt lives on through historical ties, the Haggadah and of course, food.

Mina (also spelled mayeena and meena) is a Sephardic matzo casserole commonly found on the Egyptian Jewish seder table. Derived conceptually from a layered pastry, mina can be served as a side dish or a main course, made to be meat or dairy, and is often stuffed with green vegetables such as leeks or spinach, symbolic of spring and new beginnings.

This recipe for mina comes from Emilie de Vidas Levy’s “Sephardic Cookery,” taught to the author’s mother in Egypt.

As we eat mina during Passover this year, let us honor and be inspired by the newly found freedom of modern day Egyptians.

This recipe and other creative thoughts on how to enrich your seder will appear in the Forward’s first Haggadah supplement in this week’s issue.

1) Soak matzo squares in water until soft. Drain on paper towels and reserve. Trim leaks, cut into ringlets and wash thoroughly, using the white part and some of the green if fresh. Boil leeks for 14 minutes and drain.

3) Grease 12x9x2 inch baking pan with oil, or use a casserole dish, 8 inches in diameter. Cover the pan with half of the matzo squares. Spread the meat mixture over them and cover with a layer of the rest of the matzo. Beat remaining egg and pour over the top.

Variation: You may omit leeks and substitute 2 chopped onions and ½ cup chopped parsley which are added to the meat. Bake as above.

Re-printed with permission from Irma Lopes Cardozo of the Women’s Division of the Central Sephardic Jewish Community of America.