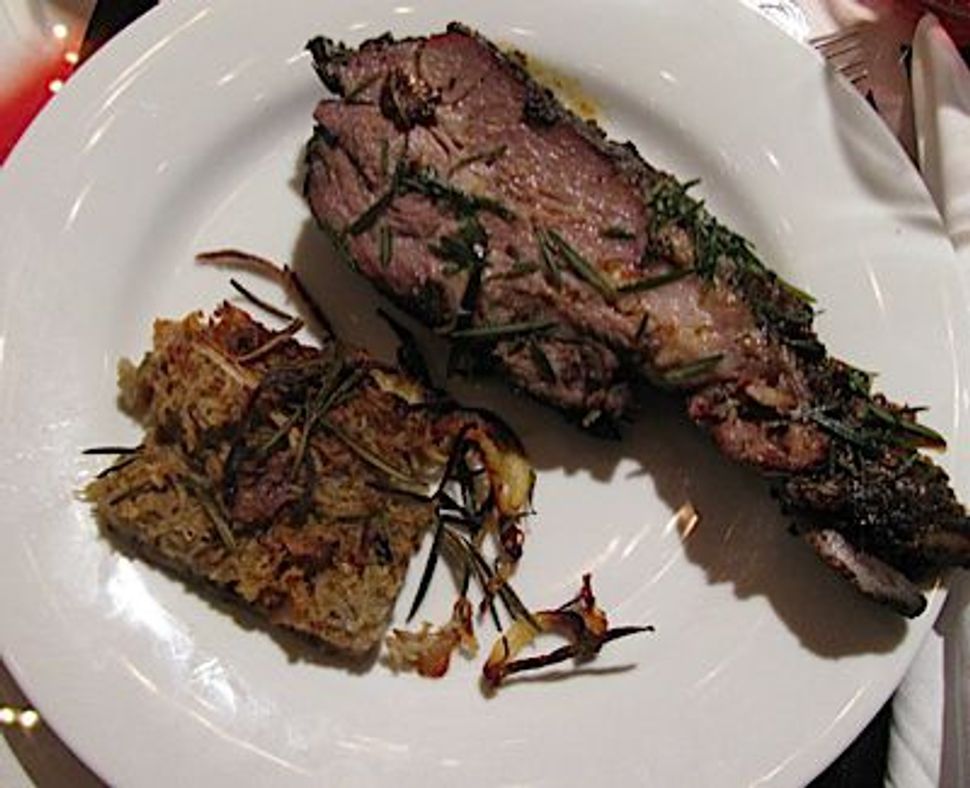 The Passover story, Seder and food are framed in many Jewish circles as things to be reinterpreted each year, by each family or group performing a Seder. Many cooks turn to Sephardic traditions to spice up the standard Ashkenazi staples or even look to other cultures (a co-worker made a Mexican brisket for her Seder this year). But it is rare that cooks look back at Ashkenazi culinary traditions and think how they can reinterpret the Seder classics.

The Beard Seder honored both tradition and innovation through a surprisingly creative and yet familiar meal. Each of the five courses Israel created was inspired by an item on the Seder plate — karpas, haroset, maror, betzah, the egg and zeroah, or the lamb shank. The dishes, which were served communally at long tables, looked deep into tradition for inspiration, bringing modern food sensibilities to the table as well as a handful of ingredients from other traditions.

“Without innovation, you don’t have the right to speak about tradition — and the reverse,” said Mile End’s owner, Noah Bernamoff.

In addition to the lamb, Israel served delicate homemade gefilte fish accompanied by beets, carrots and maror. The second course consisted of roasted asparagus, tossed in a rich shmaltz and mustard vinaigrette, topped with eggs haminados (a Sephardic preparation) and crispy pieces of chicken skin called gribenes. The smoked lamb was accompanied by a Jerusalem artichoke kugel with bits of intensely flavored citrus, instead of the standard potato kugel. Sweetbreads served over lightly pickled cucumbers, preserved lemon and fried pieces of parsley stood in for karpas and haroset’s sweet flavor enhanced a walnut cake for dessert.

Israel also served his rendition of matzo: homemade, light, crisp and more reminiscent of an artisanal cracker than a box of Manischewitz matzo. “I don’t usually come away from a Seder saying those matzos were amazing,” said George Robinson, author of “Essential Judaism,” who led the Seder. This was an exception, he said.

“We want to stay true to traditional foods that [diners] will recognize. We use a bit of a different technique approach with a slightly different thought process,” said Israel. “I think innovation comes down to a subtle slight turn of the knob…. You recognize it but I’ve never seen it before.”

The flavors, especially of rich shmaltz, were familiar to many guests. “I haven’t had such good Jewish food since my grandmother’s” said Diane Harris Brown, Director of Educational and Community Programming of the James Beard Foundation. “In some ways it exceeds hers because it’s more creative,” she added.

Bernamoff whose deli serves traditional Jewish food with a twist said that some of his foods, such as his matzo ball soup (which unfortunately, didn’t make it into the Seder) are inspired by his grandmother.

“We are creating modern traditions, founded on ancestral traditions – this is our approach. Our matzo balls are founded on her recipe.” Bernamoff said that telling his grandmother that her food inspires him to create and be innovative is more of a compliment than copying her recipe.

At the pop-up Israel’s Seder fueled lively conversations about food and its role in retelling the Passover story. His approach befitted the holiday in which we are instructed to reinterpret tradition and claim it as our own. The plates were inspiring and nostalgic, forward looking but with a strong connection to collective Ashkenazi roots and the Passover story.

Mitchell Davis, the vice president of the James Beard Foundation, who originally thought of the Seder, said the Foundation hopes to do more Seders in the future. And it should. This one sold out in 11 minutes.