The Kitchen Bookshelf: Tasty Books for Your Yiddishe Mama 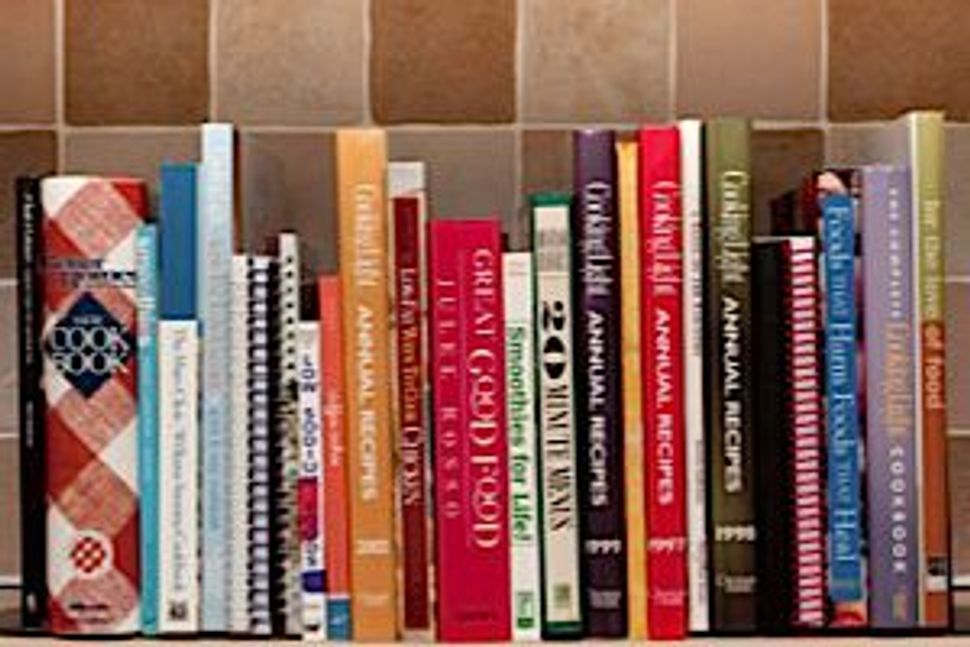 Mother’s Day may be a holiday that was made up by Hallmark, but it’s also one well worth celebrating.

There’s perhaps no stronger stereotype of a Jewish mother than one who feeds her kindele well: She makes matzo ball soup and roasted chicken for dinner — and sends her children home with Tupperware containers filled with leftovers. So this Mother’s Day, we recommend treating her to a meal of dishes that come from a less familiar Jewish community whether its from Iraq, Persia, or one of London’s hottest restaurants. Mom might just be so in love with the “new” Jewish dishes that she’ll want to borrow the cookbook, which would conveniently make a perfect mother’s day present. Here are our recommendations of this spring’s crop of Jewish food books, just in time for the day that honors the Yiddishe mama.

“Flavors of Babylon” by Linda Dangoor

Linda Dangoor was raised in a Jewish family in Iraq, only to move to Beirut and finally settle in London. But her memories of the Middle Eastern foods she ate and later learned to make with her mother in London are recalled clearly in her beautifully illustrated book. Her selection of primarily Iraqi dishes is enticing, drawing on a several thousand year old cuisine that celebrates fresh vegetables and intense aromas. “Iraqi food is aromatic, robust and spicy — but it is not hot,” she writes in the introduction. Her recipes for cold summer salads, such as a rice salad with salmon and pomegranate seeds spiced with lemon and cayenne pepper and her selection of fish dishes are perfect heading into the summer.

There’s been much chatter about whether a celebrity cookbook like Gwyneth’s could really be worthwhile, but I was pleasantly surprised to see a focus on organic, local and seasonal food in her new cookbook. The book, which is dedicated to her father, Bruce Paltrow, who taught her to cook, includes a handful of recipes from her family like their rendition of brisket and her mother Blythe Danner’s blueberry muffins. Many of the recipes are simple basics with a slight twist like polenta with fresh corn, maple dijon roasted winter vegetables and tuna ginger burgers. While some of her dishes include treyf there’s also plenty for the kosher cook to enjoy here.

In 2006 the noted London-based Israeli chef Yotam Ottolenghi was asked to write a column called “The New Vegetarian” for the Guardian. Controversy ensued, could a non-veggie really write about vegetarian cuisine? The answer is a resounding yes. As the New York Times put it, “the 42-year-old chef is famous for making it chic to eat your vegetables.” His newest book, “Plenty” is a collection of his column’s recipes plus many more. The chapters are organized around vegetables themes like “roots” and “funny onions.” While Ottolenghi pays homage to his Israeli roots with recipes like burnt eggplant dip with tahini and pomegranate seeds his book also includes Asian dishes like soba noodles with seaweed. His dishes are accompanied by exquisite food photos. But be warned, Ottolenghi’s book, for the most part, is for the advanced, or at least patient chef. Many of his recipes include a very lengthy ingredient list.

“Recipes Remembered: A Celebration of Survival” by June Feiss Hersh

This book is a touching collection of recipes of families who survived the Holocaust. The dishes, which range from shtetl recipes to foods learned by Jews in their new home countries like Argentina following the war, are recalled with care and their stories retold. When only a memory of a dish or its flavors could be remembered, Hersh sought out professional chefs and food writers, from Joan Nathan to Daniel Boulud to contribute a recipe in the same spirit. Hersh peppers the book with lighter notes to keep the tone from being overly maudlin, calling a recipe for Polish potato dumplings “the little black dress of potato dishes.”

“Persian Food from the Non-Persian Bride” by Renya Simnegar

If you followed this blog over Purim you may remember this book for its recipes for its festive Persian halvah and joojeh badamejune, or roasted chicken with eggplants, but it contains much more. The book, which includes stories ranging from the enchanting to comical, explains Persian cuisine to even the greatest novice, including an index of relevant spices and food stuffs. Simnegar’s rice dishes and slowly cooked meats would be a welcome addition to a Shabbat table. And her meat kebabs and salads like one made with herbs and dressed in lime are great summer dishes.

Forward “Ingredients” columnist and former JCarrot editor Leah Koenig, is part of the growing group of Jewish food lovers who are working to bring modern food sensibilities to Jewish cuisine. Her first cookbook builds on Jewish classics, like tzimmes, and adds new twists to them like grilling the fruit and vegetables for the dish instead of the traditional stewing. Koenig reaches beyond the usual Jewish canon to incorporate modern, healthy recipes befitting the contemporary kosher table such as warm barley, apple and feta salad. The book is also peppered with recipes for some Middle Eastern classics like muhammara, a red pepper and walnut dip and sabich, a Jewish Iraqi eggplant and egg sandwich served in pita.

While not a cookbook, Mary Zamore’s collection of essays marks an important moment in Jewish food for the Reform Movement, which published the book. The collection of 50 essays from 40 scholars analyzes different approaches to Jewish dietary laws often expanding the boundaries and ideas of kashrut to include modern food ethics such as vegetarianism, agriculture worker’s rights and protecting against food waste. The book won’t provide your mom with new recipes, but it may help her consider her (and possibly your family’s) Jewish food choices.

The Kitchen Bookshelf: Tasty Books for Your Yiddishe Mama