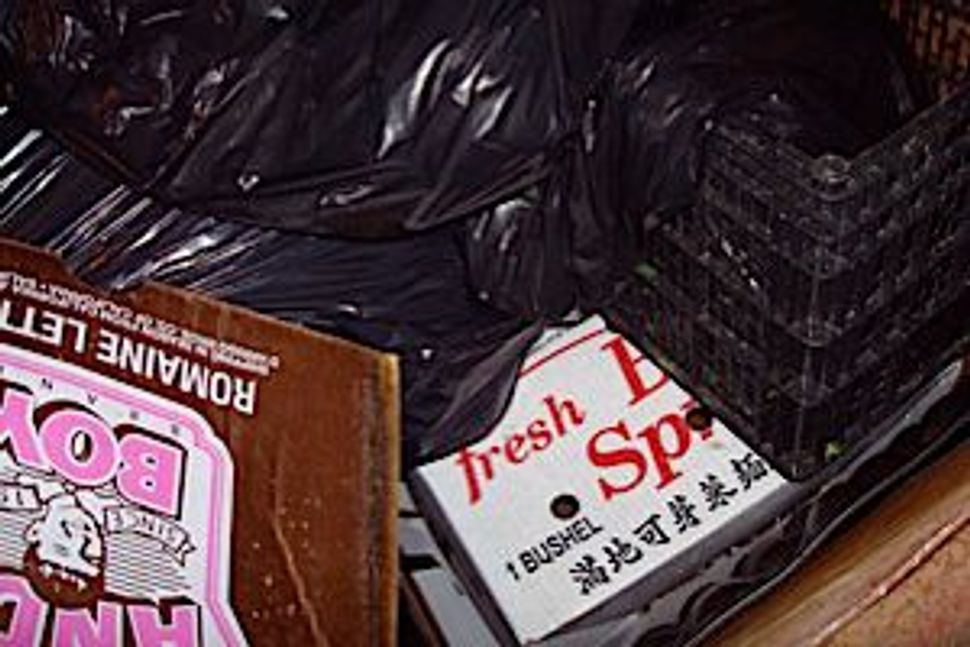 As recently as six months ago, I had the same aversion to dumpster diving as you are likely having right now. The idea of a fuzzy piece of fruit ― and I’m not talking peaches ― or a half-mushy sweet potato, from the garbage no less, evoked free association with “ick!” and “filth” and “Get that out of my kitchen!” But as I learn more about our food system and revisit some of the Jewish agricultural laws, I’m growing more and more convinced that cutting away the rotten parts of foods that grocery stores discard and using the rest is a great way to get my groceries.

In order to understand what the method accomplishes, it’s important to take a look at some of the underlying problems. The first, most obvious issue is that of food waste, also known in Judaism as bal tashchit. According to endhunger.org, “A 2004 study showed that forty to fifty percent of all food ready for harvest in the United States never gets eaten,” and the EPA website says that in 2009, 33 million tons of food were discarded. Furthermore, it states: “Food waste now represents the single largest component of municipal solid waste reaching landfills and incinerators.” That is an extraordinary amount of food wasted that could feed a lot of people, and it can’t be doing much good for the state of our landfills. By dumpster diving, not only do I not contribute to the mechanisms in place that lead to so much waste, but I physically remove mass from the discard pile.

The second issue that I solve by repurposing discarded food is taking a stand against our food system, which brings food like starfruit to Montreal supermarkets in January, months away from its natural season or growing locale. That happens because consumers pay for it, and if I don’t pay for it, then I’m not contributing.

The articulation of these ideas got me most of the way into my local dumpster, but I really got going when I decided that this was a way to live Jewish values. The obvious ethic, as mentioned above, is an adherence to the rabbinic decree of bal tashchit, not to waste, coupled with all of the “tsk-tsk”ing I can image the Torah would do at our modern Western food system.

Judaism also has quite a lot to say about managing fields, and what is the modern city-dweller’s field if not the supermarket? The Torah repeatedly instructs the Israelite farmer to aid the needy. Leviticus discusses pe’ah, leaving a corner of the field unharvested for gleaners and in the case of leket, the farmer is told not to gather any stalks dropped while reaping the field, but to leave them for the poor. Deuteronomy describes the law of shichecha, that workers may not return to the field to harvest that goods they forgot to carry out with them and must leave it for the needy. Though these laws technically apply only within the land of Israel, they are part of the canon of Jewish law that informs the way I see the world. And when I was recently confronted with them during a visit to the Kayam Farm, they very clearly screamed to me: “dumpster dive!”

Granted, the parallel is far from perfect, and so is the method: I’m not exactly needy in the same way as the Torah’s poorfolk, and nobody is willingly leaving me perfectly good produce. My personal shopping habits aren’t likely to change the world, and I need to work on my technique a bit; all I found on my first excursion was some green grapes. Not quite dinner. But it was nice to spend Passover thinking about a goal for my next personal redemption, imagining a life free from supermarkets and all they entail.

Whether or not you’re ready to get up-close and personal with that big hunk of metal next to the grocery store, the world abounds with ways to reduce food waste. Try to buy what you need, and not more. If you garden and find yourself with more bounty than you can eat or share with neighbors, use ampleharvest.org to find a local food pantry that will take your donation. Meat bones or Parmesan rinds make great stock, or use the cooking water from boiled carrots in your next soup or even to water your plants. Start a compost pile, or ask a composting neighbor if you can contribute to an existing heap. Nourishment is a delicious but sometimes complicated endeavor, and I wish everyone a year of focus on reduction, reuse, and repurposing.

Yael Greenberg is about to embark on a quest to discover what it takes to become a farmer. She currently works as the food educator and director of sustainable purchasing for Ramah Outdoor Adventure in Colorado.