Microbreweries in Israel, A Hopping 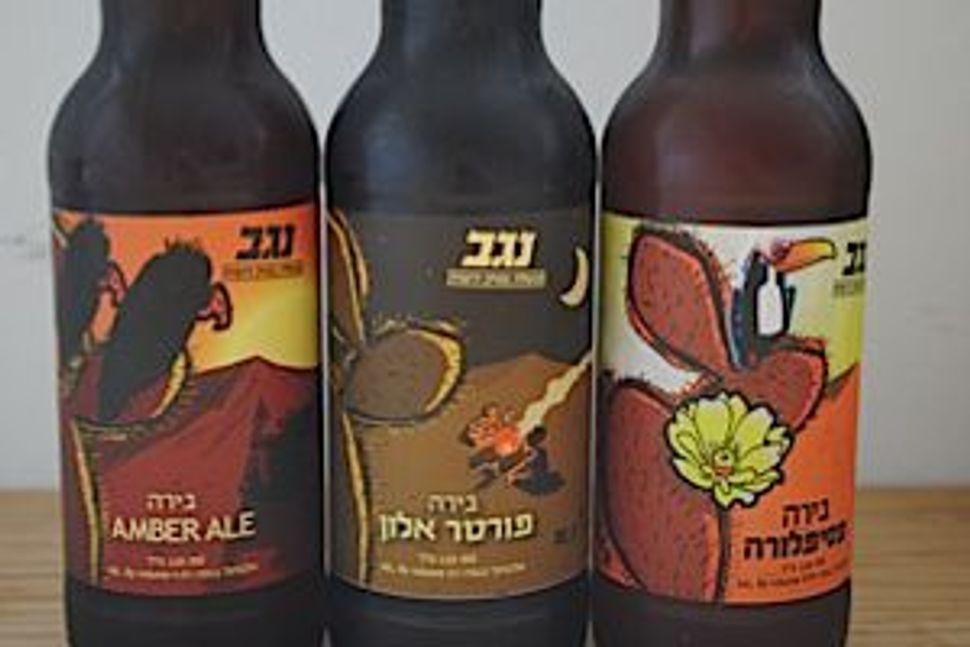 As a young country with no legacy of beer brewing, the recent rise of microbreweries in Israel has been nothing short of remarkable. And the new breed of Israeli brew masters isn’t just sticking to the rule book. They’re being creative with their brews, incorporating local flavors and putting their own stamp on an ancient — but very foreign — tradition. Negev Brewery is well known for their light and fruity passion fruit beer, and also won an award a few years ago for a smoked salmon variety they produced. Dancing Camel Brewery in Tel Aviv makes a popular mint and rosemary-flavored blonde ale for the summer, and Gal Sapir flavors Gal’s Craft Beer with everything from star anise to Sichuan pepper.

Beer isn’t an entirely new concept in Israel. The country’s first commercial “beer” — non-alcoholic Nesher Malt — was brewed by Palestine Brewery Ltd. in Rishon Le-Zion in 1935. It remains a popular beverage today, and they even try to tout its health benefits like vitamins and anti-oxidants. These days Goldstar (which has been in production since 1950) and Maccabee (since 1968) are the two best selling Israeli brews. All three beers are now owned by Tempo Industries, Israel’s largest brewer and second largest beverage company.

Even home brewing is nothing new in Israel; Gil Marks writes in “The Encyclopedia of Jewish Food” that “early central European settlers in Israel relied on beer imported from Europe or, without the benefit of hops, homemade brews.” But the craft beer revolution started in earnest about 10 years ago. Now every region of the small country, from the Galilee to Kiryat Gat in the Negev boasts its own selection of high quality microbrews.

Sapir started the same way as most craft brewers – in his home. “I used to write for a little motorcycle website and one of the articles was ‘how to make home beer,’” he recalls. “From the first time, over a year ago, I didn’t stop brewing.” He now produces four varieties and a total of 60 to 80 liters a month, which is enough to bottle and sell out of his brewery.

Although many of the home-turned-craft brewers are self-taught Israelis, a good number get their training abroad. Jeremy Welfeld of Jem’s Beer Factory in Petach Tikva received three relevant degrees — one in hospitality, one in Microbiology and The Advanced Sciences of Brewing from UC Davis Berkeley, and one in Brewing technology from the Siebel Institute of Technology — and worked as an assistant brewer in the United States before making aliyah and opening a brewery in Israel.

Yochai Kudler of Negev Brewery is a native Israeli who learned to love beer in Alaska and honed his skills at a brewery in Boulder, Colorado. When he returned to Israel he found a scarcity of brewing equipment and had to use makeshift pots and pans to get started. There is a movement to have equipment more readily available, for Israel to grow its own hops (the climate is not well suited for it, so most of the hops are imported from Germany or Belgium), and to bring beer education to Israel. Sapir is one of a few brew masters who also hosts workshops, lectures, and events on making beer.

The microbrewery bug is spreading like wildfire, with 35 microbreweries strutting their stuff at the country’s first Israeli Beer Expo this January. Most of these were boutique microbreweries that produce just 1,000 to 5,000 liters (about 3,000 to 15,000 bottles) a year. Although a beer expo is news, beer festivals are nothing new in the Holy Land. The Jerusalem Beer Festival celebrated its sixth anniversary last August and highlighted nearly 100 international and Israeli beers.

The interest in beer has also led to small scale tours of breweries. Esther Cohen of My Israel Wine Tours saw a demand for and started offering tours of a few microbreweries in addition to the normal wineries about two months ago. “I thought it would be interesting to incorporate them and change things up a bit,” she says.

While this passionate group of boutique brewers is making the beer, the next step is getting Israelis to drink it. According to the Jerusalem Post, Israelis consume an average of 14 liters of beer per person each year compared with the whopping 160 liters that each Czech imbibes. “I hope that the Israeli [taste buds] will recognize the great tastes of real true beers,” notes Sapir. While he says that “nowadays there is a big flourish of the ‘brewing madness’” and “a big buzz over it,” for now it’s not enough for him to make a living off of.

Most of the microbreweries popping up are boutique, meaning they produce less than 5,000 liters a year. So unfortunately many of them aren’t even available throughout Israel, let alone abroad. But slowly Israeli breweries are presenting at international beer festivals and competitions and it’s only a matter of time before they become more common. In the meantime, passionate Israeli beer lovers and makers – from novice home brewers to brew masters – are in the process of creating a unique beer tradition while adding to the global canon.

Microbreweries in Israel, A Hopping