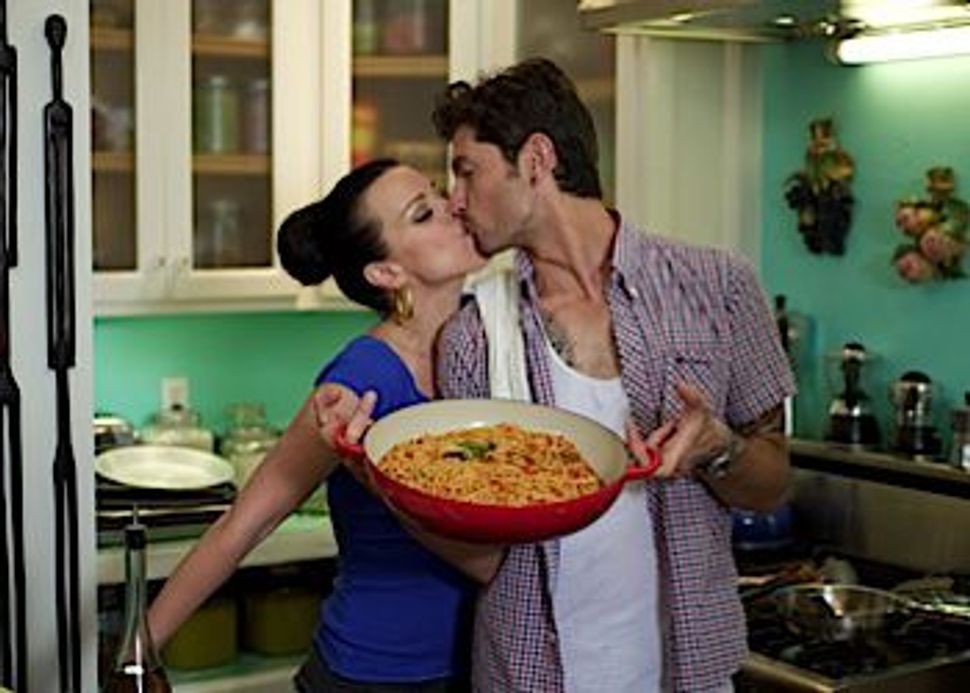 Image by Courtesy of Cooking Channel

You would probably never guess it, but the heavily tattooed Gabriele Corcos, who co-hosts the Cooking Channel’s “Extra Virgin” with his wife Debi Mazar, was raised in a kosher home in Florence, Italy. He’s the son of a Jewish father and Catholic mother (who had a Jewish father).

Before heading back to Italy to film the second season of his Cooking Channel series, Corcos broke the news to his father that he will be cooking treyf… and lots of it. “I explained to him that there will be a lot of pork and shellfish. He understands that this is important to me and it’s business,” Corcos said.

We talked to the television-chef about growing up kosher in Italy, keeping Pesach in the Alps and keeping a secret pork drawer at home.

Jewish cooking is steeped in tradition. Is tradition as important for Italian cooking?

Every family has rooted recipes passed down for generations, orally… Nothing is written down …. Tradition manifests itself in Italy constantly through food: every region, city, village, rural area and individual families have food rituals and festivities. Every season in Italy is celebrated with food. Where I grew up, we had food festivals for every kind of food: from boar to chestnuts, from langostini to tortelli, from bruschetta to tripe! However, we are more prone to celebrate meat and pastas way more than vegetables… the only vegetable that in Tuscany gets its own festival is “Cavolo Nero” (Tuscan Kale).

Were you completely kosher growing up?

My father kept kosher. But we didn’t have separate dishes. It wasn’t until I moved to the U.S. that I really saw what Kosher was. But my dad had absolutely no pork and no shellfish. There was no mixing cheese with meat.

I was the only Jewish kid in my school, and all my friends would bring mortadella and prosciutto with cheese to school. I always had one piece of cheese between bread.

You are Jewish and Italian. Was food a huge focus growing up?

No, it couldn’t be really. I hated the restrictions that my father was imposing. I hated going days without pasta and bread during Pesach. I’d have my week off from school and we’d go skiing in the Alps. And my father expected me to keep kosher for Pesach at the resort. He would bring cheese and matzo crackers. I get it that it’s slavery and salvation, but I was like, lighten up a little! I always respected the holidays, went to the temple for Rosh Hashana, Yom Kippur and Pesach, but I’m not religious by any means.

So your mother, who was Catholic, cooked only kosher foods?

It wasn’t like I had a Jewish mother cooking all of these Jewish foods, but she wouldn’t cook meat with butter. She kept things simple. She’d make Tuscan peasant foods that could be kosher. She’d make turkey meatballs and leave out the Parmesan cheese.

My dad loves meat and chicken. He’s not the kind of guy that has vegetables. So my mom would hide pork in the vegetable drawers. My father never knew. He still doesn’t know.

Was it easy to keep Kosher in Italy?

Not at all. Wherever you go it’s meat and cheese. In Los Angeles [where I live], it’s much easier to be kosher. There are aisles in the supermarket devoted to kosher food. In Italy, we had only one kosher butcher [at the Sant’Ambrogio]. He made his own salami and cold cuts — Bresaola [air-cured beef], and turkey sausages. I remember a turkey salami my mom used to buy.

You said that since your dad was a surgeon, he’d work on the sabbath. Did you have holiday meals growing up?

Yes, definitely. We did Pesach, Rosh Hashana and Yom Kippur. I specifically remember Haroset made with dates that was like a jam. My father would eat it on matzo.

We had a pomegranate tree in the backyard and we’d have pomegranates on Pesach. I really liked that. It was symbolic of abundance, and a family growing bigger and stronger. The pomegranate represented sweetness and rebirth after slavery.

Do you eat a lot of Jewish food now?

I love Canter’s [Delicatessen in L.A.]. Every time I’m sick, I go to the Jewish neighborhood and get matzoh ball soup. Kosher food never makes you sick, ever. I get food poisoning cause I try crazy things.

I like Challah bread too, for breakfast. But, I don’t buy it religiously, so to speak.

Do you celebrate the holidays at home with your kids?

No, we don’t do holiday meals. But my kids are in private schools that give them days off for the Jewish holidays. So basically I pay for 12 months and they have about a month and a half of school. So I’m always reminded that I’m Jewish that way [laughs].