When Pigs Fly: Firing Up the Grill at a Kosher BBQ Competition 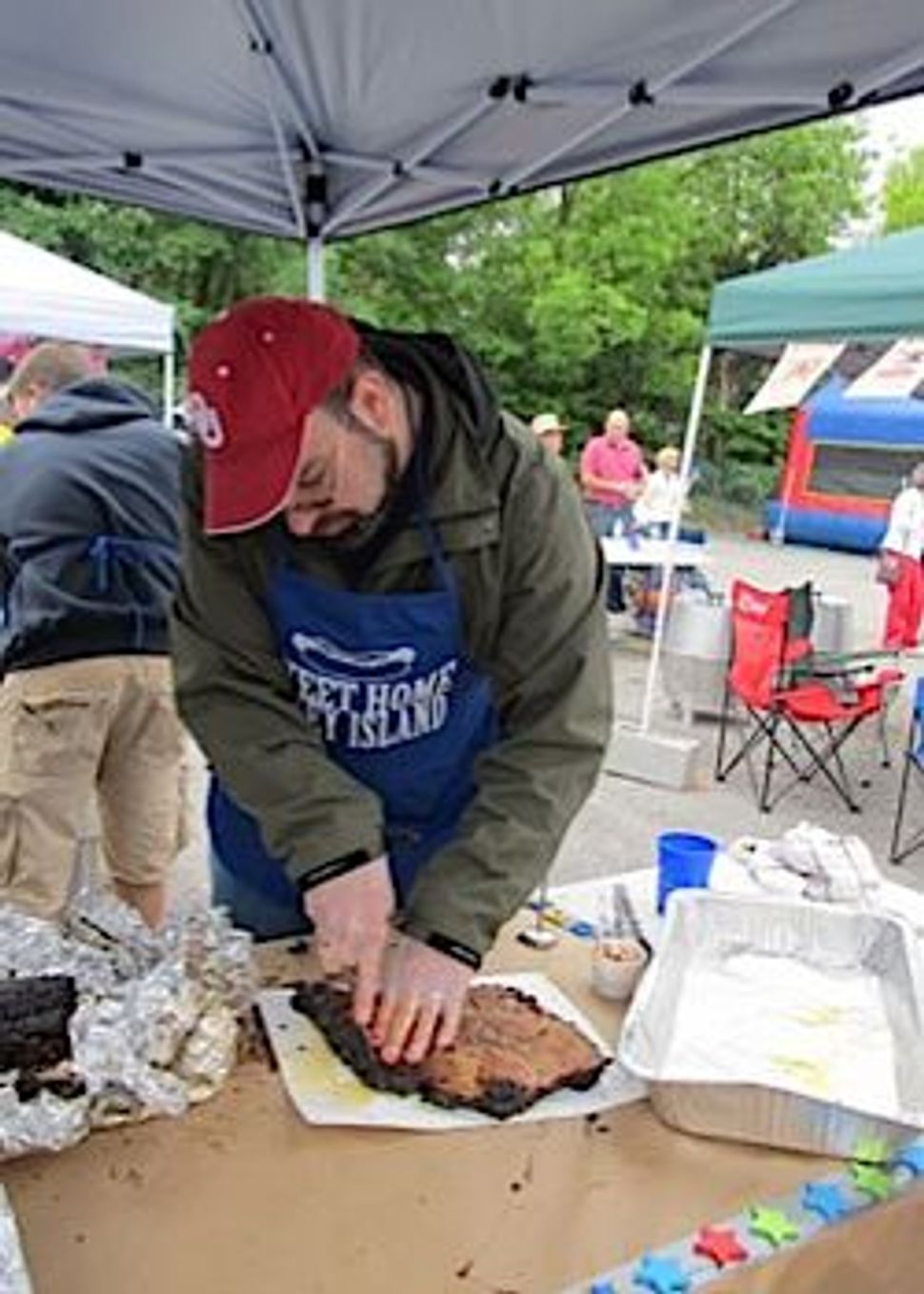 Image by Courtesy of Jake Honigman

The team on our left decorated its booth with a bull’s head with tefillin wrapped around the horns. The team on our right was anchored by a 6 foot 4 guy named Roger who helped us pass the night with tales of cooking “whole hogs”. My team, representing the borough of Brooklyn in Alabama — and taking the task quite seriously — decorated our booth with a Brooklyn bridge cutout and pictures of the subway, and donned aprons with our team name, “Sweet Home Coney Island”.

We were competing at the second annual When Pigs Fly! Kosher BBQ competition and festival, held at Temple Beth-El, Birmingham’s Conservative synagogue, last Sunday. The competition gives southern kosher-keeping Jews (along with the occasional group of wayward northerners) a chance to get in on the fun and flavor that their neighbors take for granted all year long. It’s one of a small handful of annual gatherings of its kind, all inspired by the Anshei Sphard-Beth El Emeth (ASBEE) World Kosher BBQ Competition, which has been going strong in Memphis, Tennessee every year for more than two decades. ASBEE, in turn, is based (very loosely) on the Memphis in May World Championship Barbecue Cooking Contest, a three-day celebration of smoked pork.

At When Pigs Fly!, teams compete in three food categories — brisket, beef ribs, and beans — and for best team name and best booth. Each team (this year there were 23) is provided with meat, two charcoal grills, and all other ingredients and utensils, so as to keep the kashrut level strict enough for anyone to participate. My team of current and recently-expatriated Brooklynites — my girlfriend, a former roommate, three cousins, and me — made the long journey down in search of good food, a unique adventure, and, if we were lucky, some barbecue “street cred”.

Back in Brooklyn, we had trained for several months on whole briskets we got from a discount kosher super market in Midwood and racks of beef ribs we scored at Pomegranate, a gourmet kosher supermarket on Coney Island Avenue. We developed a dry rub (learning through practice to eliminate all salt from the traditional recipes, to account for the saltiness of kosher meat) and a set of fire management techniques designed to get our brisket tender without drying it out. We worked hard on a sauce that combined elements of southern BBQ tradition with Jewish brisket tradition — tomato-based with loads of onion and garlic, medium on the brown sugar and a little light on the vinegar and hot pepper, with the brisket drippings stirred in. The folks at Pomegranate were nice enough to cut us large chunks of scrap beef fat, which we rendered and worked into our beans recipe.

Teams were allowed to start cooking as soon as Shabbat ended the night before the competition, and we took full advantage of that rule, though there were at least three teams who had their briskets on the grill before we did. As they say down south, good barbeque must be cooked: “low and slow!” We got ours on at a reasonable 3:25 a.m., which gave us about 10 hours to get it ready for a 1:30 p.m. judging. The two racks of beef back ribs went on at 5:45 a.m., and we started simmering the beans — rendered brisket fat and all — some time shortly thereafter.

When all the meat had been admired and sliced, the samples submitted in styrofoam containers to the judges, and the scores tallied, our beans got us a second place trophy! Unfortunately, our brisket, on which we had pinned a lot of hope, was up against some tough (or perhaps I should say, tender) competition.

Good beans, like barbecue, is an art that cannot be perfectly measured, but must be tested throughout the cooking process and made many times to get “just right.” Here’s a basic guide to our award-winning beans recipe.

3) Add water to cover by about a half an inch.

4) Simmer for anywhere from 2 to 5 hours, uncovered, adding enough water to keep the beans from drying out completely but not enough to make them soupy. Stir every time they develop a slight brownish skin on top (about every 15 minutes) and let a skin form before serving.

When Pigs Fly: Firing Up the Grill at a Kosher BBQ Competition