Kosher BBQ Lovers Try Not To Overcook the Brisket 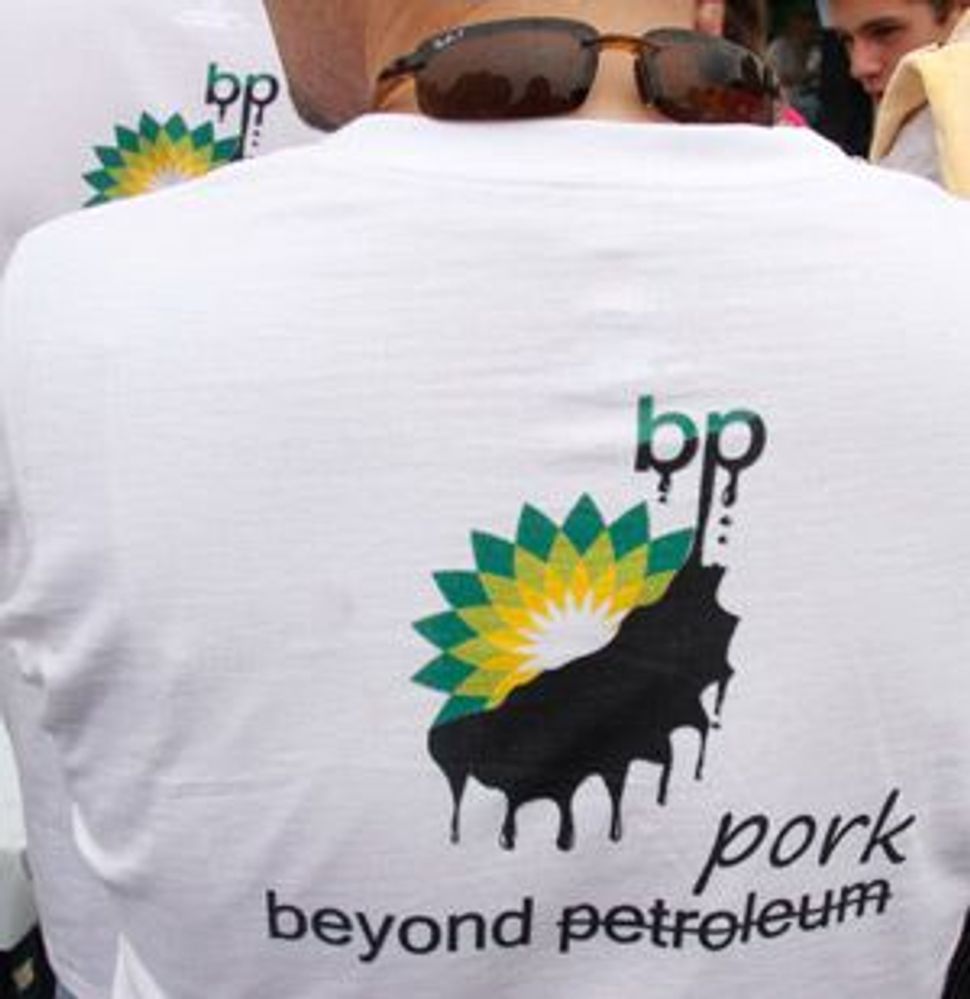 “Kosher” and “barbecue” are two words that don’t normally fit together in one sentence, but the oldest Orthodox synagogue in Memphis has found a way to make it work by focusing on beef and beans.

On a Sunday in late August, the shul known as Anshei Sphard-Beth El Emeth (ASBEE) hosted its annual “Kosher BBQ Contest and Festival,” attracting 42 competitive teams of cooks from around the South and as far away as New York. They turned the synagogue’s parking lot into a white-tented kitchen, filling the air with smoke, laughter, and the sizzle of Southern-style brisket and ribs broiling on charcoal-fired grills.

The beef fest got started in 1989, when a group of Jewish men asked the very established “Memphis in May World Championship Barbecue Cooking Contest” to do something a little radical: offer a non-pork category. When organizers said no, Ira Weinstein and Larry Brown of the ASBEE congregation decided to start their own competition.

Over the years, Alan Harkavay and Stuart Lazarov have made the kosher barbecue contest into more of a fundraiser and community event by adding a 3-on-3 basketball tournament, a pickle-eating contest, and by securing numerous sponsorships. This year, more than 2,500 people attended.

“The beauty of this event is that every Jew can be comfortable here,” said Lazarov, who is very proud of what he’s helped to create. ASBEE has about 350 families, and they all pull together to host what organizers this year dubbed the “World Kosher BBQ Championship.”

There’s no doubt the competition is fierce. “All 42 teams genuinely believe that they are going to win,” said Harkavay, this year’s team chairman.

To compete, each team must use a kettle grill that has been stored all year long in the synagogue; all utensils must be ritually washed in a mikveh, and all ingredients must be bought in advance by the event staff. Everything from the meat to the salt must be inspected by the rabbi and certified as kosher.

Teams set up their tents after sunset on Saturday, August 28, and started cooking as early as 4 a.m. Sunday. They presented their barbecued ribs to the judges at 11:30 a.m. and their brisket two hours later. Nearly two dozen judges, most of them local celebrities, decided who got the bragging rights and the trophies with the cow on top.

Larry Weiss, who was encouraged to participate this year by his daughter, said that he prefers the smoker he has at home to the kettle grills. “We nearly overcooked our brisket,” he said. “But once you do it, you know what to change for the next time.”

Each team was judged in five categories — team name, design, brisket, ribs and beans. The team names and booth designs set the tone for all the fun.

Take Fleish Gordon, aka Steven Weinberger of Brooklyn, N.Y., and his “Beefy Bunch.” They dressed like superheroes, and each team/family member had an alter ego. There was Fleish himself, Princess Paprika, Brisket Boy, Bar-B-Cutie, the Ribster, Beanie and L’il Saucy. They didn’t take home any trophies this year, but Fleish Gordon won the adult pickle-eating contest without breaking a sweat. (That contest, by the way, was sponsored by a group of doctors — gastrointestinal specialists, no less.)

Among the team names, there were three British Petroleum (BP) knockoffs — the Beyond Pork (BP) Offshore Grilling Team; the Beef Producers (BP), who have been “spilling millions of barrels of light sweet cow into Yidishe bellies since 5742”; and the Baked Beans (BB), who have been producing “natural” gas for more than 20 years.

The Rabbi and his Bris-Kit Team — Rabbi Levi Klein of Chabad Lubavitch of Tennessee is a mohel in the region — cleverly showed off a menu board that listed Adam’s Spare Rib among the offerings. Their motto? “The tip’s on us.”

The LeBron Flames and the Miami Meat Team from the Margolin Hebrew Academy of Memphis won awards for both the best booth and the best name, as well as the Showmanship Grand Prize, no doubt due in part to the basketball tie-in. Led by Daniel Lewis — who claims to have no special cooking skills — the team had a lot of fun competing. “We all grew up in the community,” Lewis said. “We were going to be here anyway, so we started a team.” 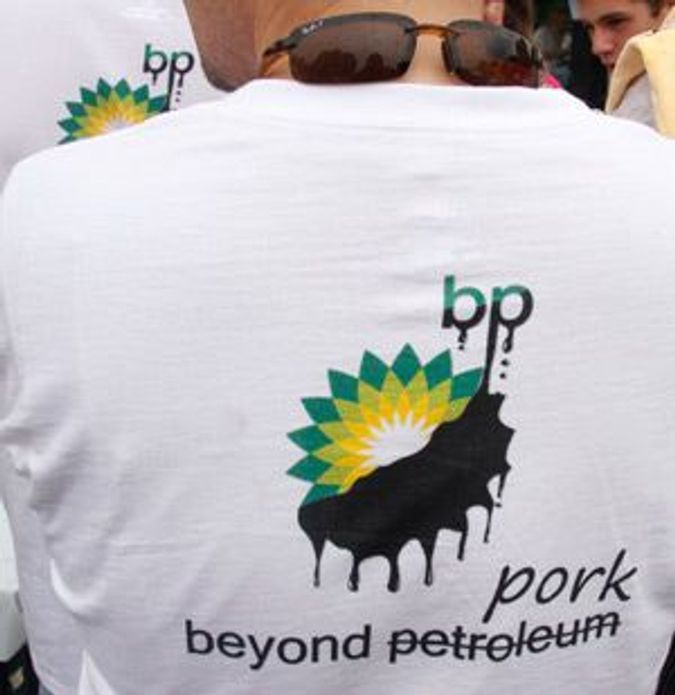 The Barfield Basters, led by Matt Cohen, were the big winners this year, taking home the first-place trophy in both beans and ribs, as well as the Grand Champion trophy. Cohen said he cooks the meat over a pan of beer and then bastes the meat in beer all day long. This was the Basters’ third year in the competition, and their booth was lined with trophies from years past. “We get a keg of beer each year and anyone who drinks beer and comes to the tent is on the team,” said Cohen. This year’s keg was filled with Pabst Blue Ribbon, which was also an ingredient in the winning beans. Cohen’s team likes to cook the beans until they burn, and then skim off the top layer for the judges.

If you stopped to chat with the teams in their tents, most would offer you a taste of bologna, sausage, brisket, chicken or a rib, but visitors could also purchase a plate at the Cowsher Cafe run by the ASBEE Sisterhood. The women prepared 200 pounds of brisket and 800 plump chicken breasts that were donated by Mehadrin Kosher Poultry of Birdsboro, Pa., to raise money for the synagogue.

Thanks to the Sisterhood’s food, the team entry fees ($125 each), and the sponsorships, the contest and festival have been the shul’s biggest fundraisers. Beyond that, Lazarov said, it’s the best Jewish community event in the city.

“After attending our event, leaders from other Jewish communities became interested, and with our help started Kosher cooking contests in their communities, notably Atlanta, Philadelphia, Cleveland, and Birmingham,” says Harkavay, adding “We are still the largest and best and ‘Granddaddy’ of them all!”

The Forward welcomes The Jew & The Carrot — a partnership between the Forward and the Jewish environmental organization Hazon — to its family of blogs. This blog is the destination for news and features about Jewish food culture and cooking, and a resource for holiday recipes.

Kosher BBQ Lovers Try Not To Overcook the Brisket