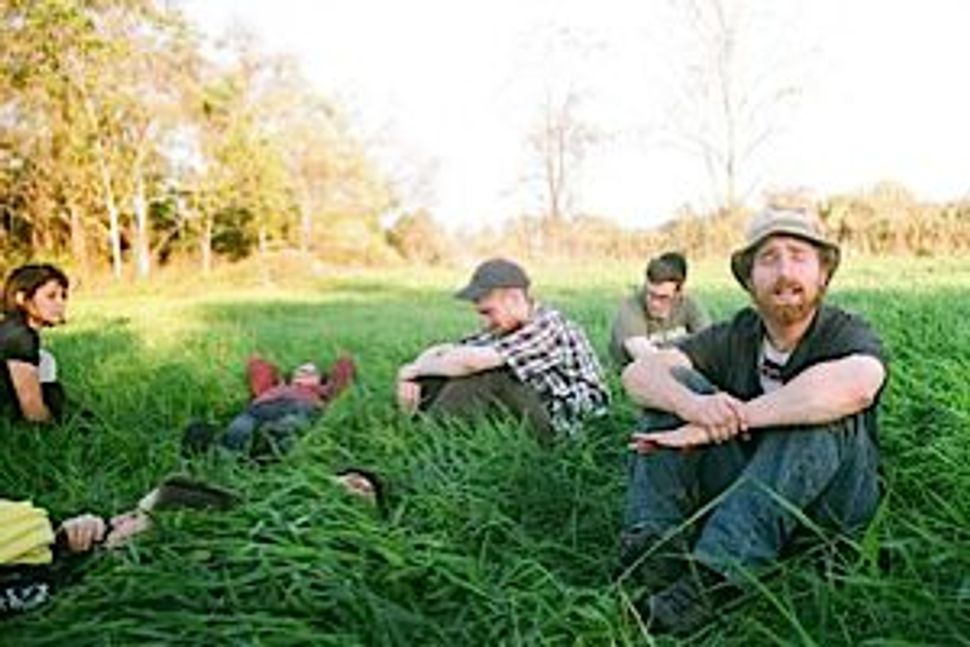 Image by Courtesy of Naftali Ejdelman

Like a number of young American Jews involved in the “food movement,” a group of about 10 people will gather this summer at an organic farm. They’ll harvest the farm’s bounty, participate in cooking classes, study Jewish texts and form an intentional community. But this group will do it all in Yiddish.

The program called Yiddish Farm, started by Naftali Ejdelman and Yisroel Bass, will launch its pilot summer program in late July at Kayam Farm outside Baltimore. Next year they will move the operation to a farm they have rented outside of New York City, where they hope to ultimately create a “Yiddish speaking pluralistic community there all year round,” says Ejdelman. We sat down with Ejdelman to find out their plans, a bit about the roots of Yiddish farming (there’s more than you might expect!) and what they will be growing on their farm.

Devra Ferst: So, what is the Yiddish Farm?

Naftali Ejdelman: Our purpose is to create opportunities to use Yiddish outside of the classroom. We’re using farming to strengthen the Yiddish speaking community. This year there will be three programs. The first is a three and half week Yiddish immersion organic farming program where participants will learn basic skills of organic farming, weaving, cooking. We’ll immerse ourselves in Yiddish culture, everything will be entirely in Yiddish.

The second is the Golus Festival — a four day outdoor camping adventure. All of the activities will either be related to Jewish culture around the world or natural skills like hide stretching, building chicken coups and soap making.

The final program is a Shabbat in Vineland, New Jersey, celebrating the accomplishment of Yiddish speaking farmer immigrants. It will be an important opportunity for [Yiddish farm veterans] to share their stories and for us to have a meaningful intergenerational Yiddish farming experience.

Can you tell me a bit about the Yiddish farm history in the United States?

There were Yiddish speaking farming colonies all over North and South America. There were communes and people selling their produce. It wasn’t just one phenomenon. People of all kinds of ideologies were involved.

Our biggest influence is the Freeland League a territorialist organization that was looking for a home for Jewish refugees. A lot of what they did was to create camps where they taught Jews how to farm… The movement was started in 1934 and they were still active until the 50’s. My grandfather and great grandfather were very committed territorialists. They dreamed of one day living in a Yiddish speaking agriculture territory.

How did that work out? Were they farmers?

My great-grandfather died young and grandfather tried to found a Yiddish speaking farming colony in New Jersey. He was a professor and once he got that job, he couldn’t become a farmer. The whole venture was complicated.

When did you get the idea for reviving the Yiddish farm?

We started getting the idea for this a couple of years ago. I worked for Teva, did Hazon bike rides and was a fellow at Kayam Farm. For me that’s where it came from. I’m not sure I came up with the idea for the farm. Yisroel [Bass] also thought he did — he got it from reading about territorialist. Meira Goodman in Israel has also been pitching this idea for a while.

Who’s involved this summer and what sort of programs will you be running for the intensive farm participants?

Yisroel is coordinating that program. He’s put together a really interesting program that includes Yiddish theater. We’re going to have someone from the Haredi world teaching Jewish agriculture laws in Yiddish. Eve Jochnowitz will be leading sessions on Jewish food and Chani Getter, a life coach, whose studying to be a rabbi will be leading sessions as well.

How proficient in Yiddish do participants need to be?

The standard that we’ve been using is that a person needs to be able to express their feelings in Yiddish. We don’t have a litmus test, it will take some experimentation. We want everyone’s Yiddish to be good enough that we don’t have to switch over the English.

How many people do you expect and what sort of community, religious and otherwise, are you hoping to create?

We’ll be about 10 people. We won’t work on Shabbat and we’ll keep kosher. But besides that, our religious practice will really be based on what people’s comfort level is. It’s really an intentional community.

Where will you live?

We’re renting a cabin at Kayam. That arrangement is only for this summer. In the future we will be on our farm that we’re renting in Goshen, NY, where we’ll have a longer summer program. We’re preparing that land for cultivation. So this summer we’re planting cover crop to prepare the soil, enrich it and de-weed it.

What will you do with the produce you grow on the farm in Goshen?

There’s two aspects of this. We’ll grow items for sale and for us to eat. This will be more experimental. We’re not going to grow anything in large quantities unless we’ll be able to sell it. We’ve spoken to people in local community — we’re hoping to get customers from Hasidic communities — which may be too complicated because of the bugs involved in organic farming.

We’ll also sell in Orange County, New York to the Jewish community. We plan to set up a farmers market and CSA and eventually it’s possible that we would sell within the city.