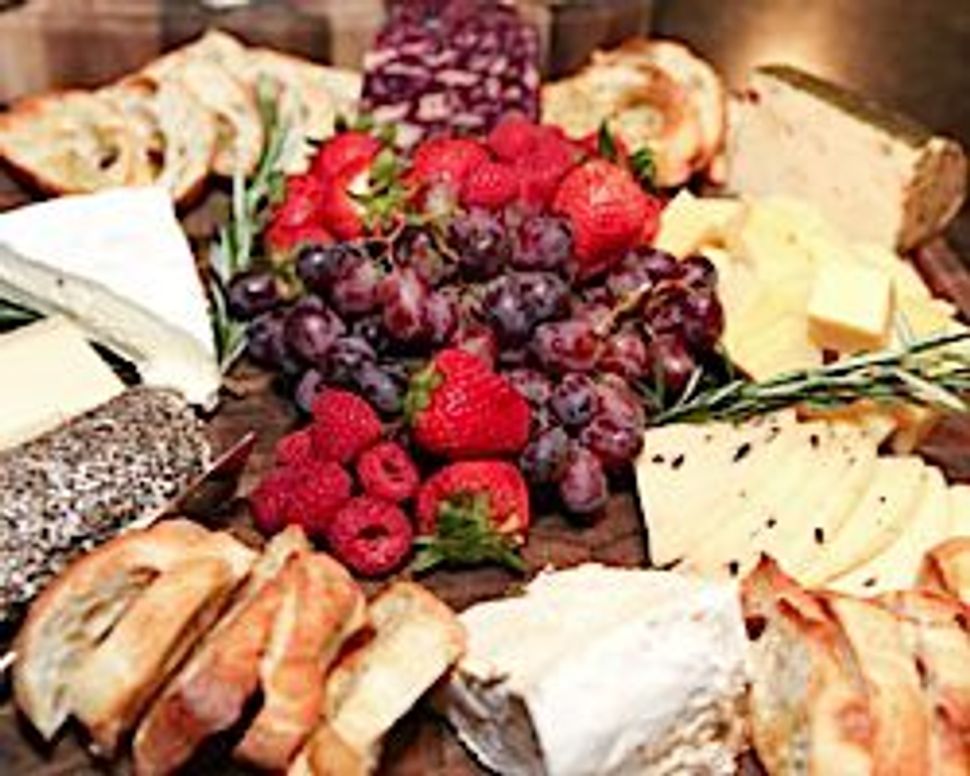 Many passionate kosher foodies know that kosher cheese is no longer limited to blocks of cheddar and shredded mozzarella. More and more, kosher cheese makers are trying their hands at artisanal, specialty cheeses. There are Israeli cheese makers who travel to France to learn the tricks of the trade, and Wisconsin cheese makers who add spicy flavors to their authentic Midwestern cheeses (that just happen to be kosher). Raw milk is also increasingly common in kosher cheese, as are strong, sharp flavors.

“In the past 10 years, kosher cheese has really taken off,” said Elizabeth Bland, the Alabama-born cheesemonger at Brooklyn’s Pomegranate kosher supermarket. The self-described “cheese mistress” has organized kosher wine and cheese pairing parties for the past three years (“I don’t eat much meat because it messes with my cheese schedule,” she said with a laugh).

“[Kosher cheese is] where kosher wine was about 15 years ago,” Bland said. She expects it to get even more specialized in the next 10 to 15 years, as customers demand more unique options. The problem she finds with kosher cheeses are not a matter of quality, but quantity. “There isn’t as much of a demand for the more unique cheeses yet. People who are super kosher eaters are more focused on meat,” she said.

But, she’s seen a change in the five years she’s been working in cheese. “Religious people are interested in the stories behind the cheeses and cheese makers — stories about Israelis traveling around to France and Spain and coming back to Israel to make the cheese they discovered. People are reading Bon Appetit and Saveur, and they want to try the cheeses they read about, but they want them to be kosher.”

There are a couple of things the kosher world is missing. For instance, you can’t find a kosher pecorino toscano, a nutty, creamy cheese with a crumbly texture that borders on oily and bears some resemblance to Parmigiano-Reggiano, “but it’s not because it can’t be done,” said Bland. (Kosher cheese makers take note)

Shavuot is a great time to break out the cheese platter and try some interesting options. Here are some of Bland’s anything-but-bland suggestions for a cheese selection to knock your guests’ socks off:

Cranberry Pecan Chèvre by Natural & Kosher
This “really mild, fresh goat cheese” has cinnamon and cranberries throughout, and a dusting of pulverized pecans on the outside. The cheese, which hails from the Midwest, is from Anderson International — a company with three lines of kosher cheese, one of which is organic. Bland said that Anderson International’s French owner, Brigitte Mizrahi has “probably got the best gig in town for kosher cheese.”
How To Serve It: Present the cheese, which comes as a log, on a cheese platter with crackers, nuts, fresh grapes and dried cranberries.

Sugar River Cheese’s White Cheddar With Chipotle
“You look like a genius when you put it on a cheese plate, thanks to the marbled chipotle,” Bland said. The base cheddar is a mild one, and the cheese has a slightly burnt, tangy, smoky flavor, according to Bland. Sugar River cheeses come from Wisconsin cows that are treated with no hormones.
How To Serve It: Add slices of tomato and grill in a ciabatta role for a south-of-the border grilled cheese. It pairs nicely with a glass of shiraz.

Kirkeby Dairy’s Sol Danablu Blue Cheese
This blue cheese is made from the milk of cows “who basically live in some kind of paradise in Denmark,” Bland said. “For people who don’t eat a lot of blue, it has a real bite, almost a metallic flavor.” So beware. It’s widely available in kosher markets.
How To Serve It: Try it with a apples, dried cranberries and nuts, such as almonds and pecans. It crumbles well so it’s great on top of a salad or even whisked into a vinaigrette.

Barkanit Dairy’s Shahat
The owners of Barkanit, work on a moshav in Israel but learned the art of cheese making in France. This cheese is a sheep-goat’s milk blend from Israel, it’s creamy and made in the style of the French Selles-sur-Cher, coated in charcoal and white mold. The acidic, tangy, bright goat’s milk is tempered with a rich, creamy sheep’s milk taste, making for a well balanced cheese. The mold gives it an earthy quality with a touch of spice. “It’s delicious,” said Bland. “We often sell out.”
How To Serve It: Bland emphasized that this is a table cheese, best served with grapes, figs and walnuts. It’s not meant for cooking. Try it with a Sauvignon Blanc or Pinot Grigio.

Pomegranate’s Mozzarella
This isn’t just a plug for Bland’s employer. Pomegranate one of the only place in America where you’ll find authentic, cholov yisroel (strictly kosher), homemade mozzarella (those not in the NY area can order by calling the store). One of the more most unique inventions is Pomegranate’s Romesco “Munsterella,” a blend of munster and mozzarella curds that’s coated with about 17 ingredients — including peppers, sundried tomatoes and cumin — and formed into a log, which give it a broad range of flavors. It’s an exotic cheese with an almost Asian character and semi-firm texture. This cheese is available in slabs/rounds or in thin slice packs for sandwiches.
How To Serve It: Mozzarella is perfect with tomatoes, basil and a drizzle of olive oil (as a caprese salad), and Bland said the munsterella is perfect for sandwiches, but beware: Bland said that when it’s melted, the rind looks just like bacon.

Fanticini Parmigiano Reggiano
This hard-to-find, Italian raw milk cheese is pricey, but it’s the real deal, according to Bland. Though it runs around $28 per pound, the good news is that will hold up in the fridge for a while. Like any other Parmigiano Reggiano, it has a very granular texture and tangy, sharp flavors. It’s salty, but with some sweetness from the milk. The cheese is made with animal rennet, but the animals slaughtered to obtain the rennet are properly shechted (ritually slaughtered) and it is also cholov yisroel. It can be found at specialty stores such as Zabars and Fairway or on Kosheritalia.com.
How To Serve It: People often use this for grating, but it works well on its own, too. Fresh fruit pairs nicely with it. Bland likes to wash it down with a fruity wine, such as a Sangiovese.

Koshergourmetmart.com, igourmet.com, gourmetfoodstore.com have a range of specialty kosher cheeses.

For more on kosher cheese, check out Bland’s website, KCheese.com.