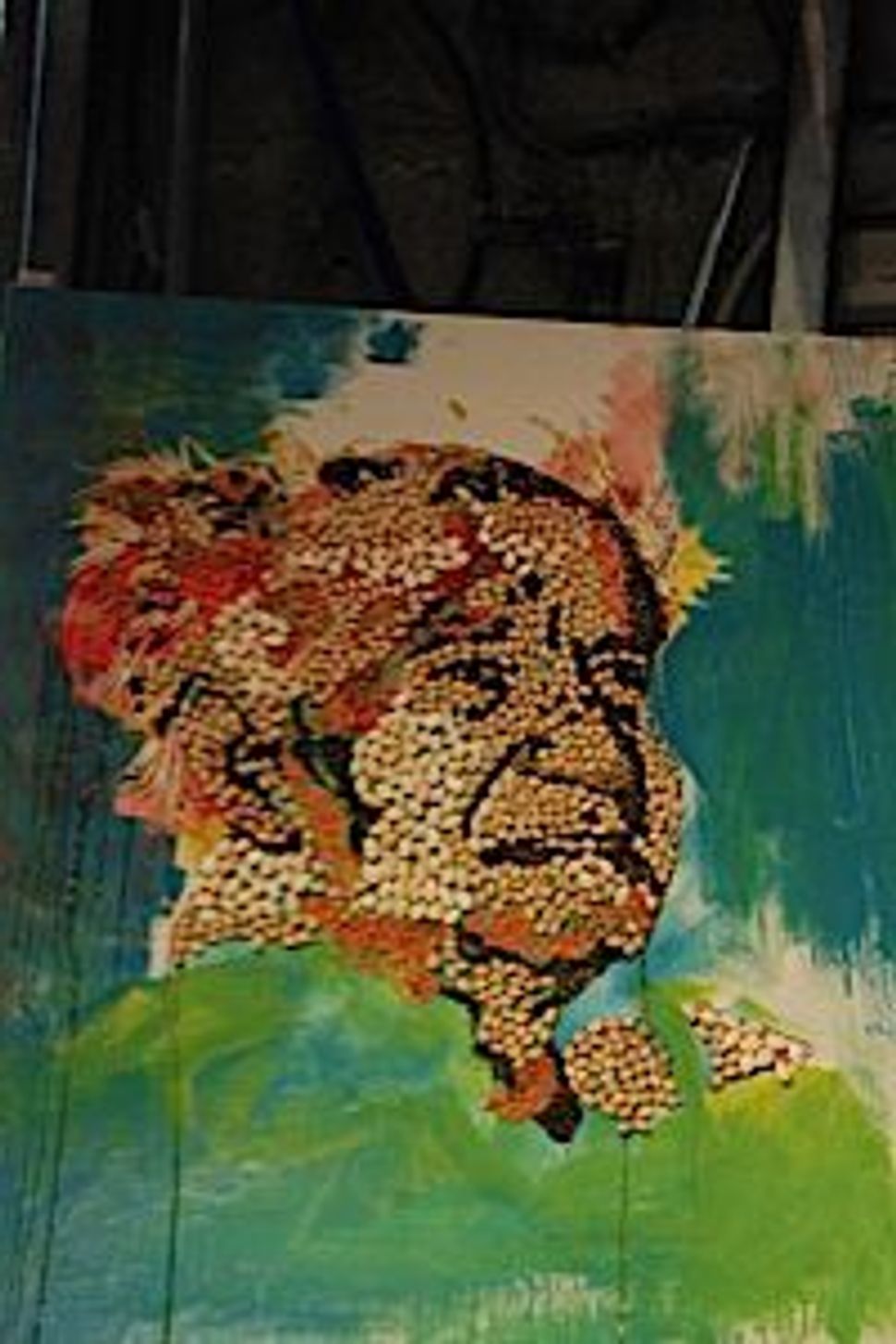 A portrait of David Ben-Gurion is finished with seeds, beads and lentils. Image by Sarah Melamed

Bodies groove to the beat of Mizrachi salsa as an old woman pushes her shopping cart past them. It’s the incongruous world of Balabasta, a festival that merges art, dance and music with Machane Yehuda, Jerusalem’s biggest outdoor market.

“The market is the main focus of this festival and is not merely the backdrop,” said Itay Mautner, artistic director of the Jerusalem Season of Culture and the brainchild of the event. With this idea in mind, Balabasta was born, a festival where vegetable, spice and clothes vendors take center stage. For the second year, the festival has added fantasy, humor and pure wackiness to the capital’s shopping and entertainment hub.

(Check out a slideshow of the festival, below.)

Named after a neighborhood outside the old city, Mahane Yehuda Market was first established at the end of the 19th century. Before the area evolved into a fashionable rendezvous and tourist attraction, it was a place to buy household necessities. For some it is still used in this way. But, today a more affluent generation sit in chic cafes to ponder the meaning of life, an activity their ancestors would have scoffed at.

The market has had to redefine itself. “It’s not the same place I remember as a child”, Mautner recalls. The festival has juxtaposed these two contrasting spirits while striving to create an atmosphere of acceptance.

Artists have found ingenious ways to integrate the market in their work. Shlomit Ya’acov assembles mosaics with gummy bears and licorice, exhibiting her work across from the candy store. A dance company performs a skit representing the traditional balabusta, a no nonsense homemaker whose life revolved around market and home. Meanwhile the vendors (or balabastas, as they are known in Hebrew) continue to sell long into the night; figs, grapes, fresh bread, parsley, spices…

Spectators meander down darkened alleyways and into hidden corners discovering an eclectic carnival of sights and sounds. “We want to allow visitors to experience the festival through exploration, just as one would a market” explains Mautner.

An actor, dressed in the flowing robes of a village elder gives out free advice, “Remember that a caterpillar will transform into a butterfly”. Beside him two young artists scribble away. “They are poets for a shekel” says a boy holding out his poem. An energetic cacophony sweeps through the market; the calls of the merchants mix with galloping darbuka drums. It’s Intoxicating, crowded and absolute, marvelous fun.

Aromas from nearby food stands begin to seek out their customers. The corner eatery prepares Jerusalem’s famous mixed grill of chicken offal, the sizzling meat stuffed into soft pita. Freshly baked bourekas release little clouds of steam from their crisp phyllo shell, beckoning, enticing. There’s already a small gathering in front of the falafel stand. Meanwhile, Ima’s Kubba Bar, known for its Middle Eastern dumplings is packed and so is every other restaurant and café in the area.

I buy freshly baked Bukharian bread still warm from the taboon and walk over to a delicatessen to pair it with creamy Israeli goat cheese. Wine bars, gourmet food shops, health restaurants, European style bakeries and other upscale establishments have created a gentrified feel to the market. Yet the home-style restaurants are as popular as ever, selling slow-cooked stews over kerosene stoves and serving the quintessential hummus, drizzled with olive oil to share at the table.

Clowns, capoeira warriors, gymnasts, pantomime artists and gigantic puppets attract crowds of all ages. The festival “brings children and adults together as well as help revive the center of the city” says Uzi-Eli Hezi, a fixture of the market known for his refreshing herb and fruit drinks. There is a whimsical and elevated mood, one that doesn’t exist on a typical market day.

Above us performers sing off roof tops and dance on balconies dressed in bizarre costumes; visitors stop mid stance and point them out to their companions. Soon large groups gather to enjoy the music, a few sing along and sway to the rhythm, eventually continuing on their way. Their spots are quickly taken by a new audience who bring a fresh surge of enthusiasm to the air.

Balabasta festival tries to galvanize the market as a creative center while honoring its past. On a few sultry summer nights this is achieved, allowing the market to function normally while combining it with a touch of magic.

Artists work together with merchants to strengthen community ties, embracing change while preserving the market lifestyle. It opens a cross cultural conversation between two very different groups of people who share their love of the market and all it represents.

The festival runs every Monday night from 5pm-11pm in July.