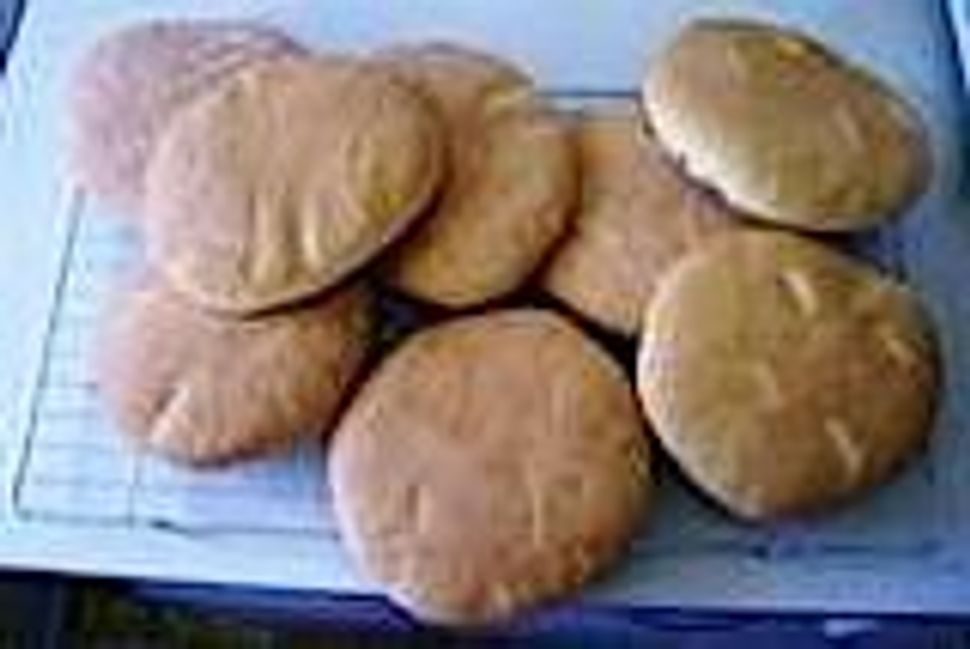 Years later when my children went to yeshiva, challah replaced the Khubz ‘Adi on our Shabbat table. However, as a couple of decades passed, I returned to my roots. I decided to prepare Khubz ‘Adi, just as my ancestors had baked for Shabbat centuries before me. In my heart I knew that food defines who we are and that I was preserving a culinary legacy for my family, and strengthening the heritage of my community.

Khubz ‘Adi was not always as easy to prepare as it is today. Hundreds of years ago, in the crowded wooden city of Aleppo, Syria the risk of fire was great. So, my Grandmother and her peers, to ward off the danger had their dough baked in a communal commercial oven called a furn in Arabic. It was able to achieve the high heat needed to bake bread properly, and more importantly, safely. It was also used to slow-cook the Saturday Sabbath meal. Family members would bring pots of hamine (a Syrian dish similar in idea to cholent) to the furn, where the flavors would marry one another as they cooked overnight to bring mouthwatering sighs of pride from family members who would arrive the following day to retrieve them. Each family member was able to identify their own special pot, for they would adorn each one with a colored thread or unique ornament.

I fully realized the impact of baking Khubz ‘Adi after the publication of my book “Aromas of Aleppo, The Legendary Cuisine of Syrian Jews.” Shortly after the release of the book there came a knock at my door. And there stood a perfect stranger. He introduced himself as Albert Sasson. Much to my surprise he was inviting me to get on a plane to Shanghai, then to Beijing and then to Hong Kong to bring the longed for authentic Syrian recipes to the Syrian Jewish business men who have traveled to the Chabad houses in Asia for decades. They hungered to keep their Syrian cuisine and heritage alive, along with the comfort it can offer.

I was on a plane before I knew it with my husband Sammy — along with four huge duffle bags, filled with spices and ingredients. The smell of the freshly ground kisibra, or coriander, and camoon, or cumin, seemed to permeate the air around me.

After unpacking in Shanghai, I cooked for an entire week with Chinese assistants, including preparing Shabbat dinners for over 250 people. We made three hundred kibbeh hamdahs, stuffed savory Syrian meatballs, squeezed 300 Chinese grown lemons, and did lots and lots of chopping, dicing, scooping, rolling. The hot Syrian flatbread kept coming out of the oven by the dozens.

I thought back to the turn of the century to the way our ancestors prepared our traditional bread, after leaving home from Aleppo to move to America. Our traditional bread from Aleppo became a kind of symbol — a family reassurance — that we were not totally assimilating. We had moved, but we were still ourselves. And now here I was, making that very same gesture in China; baking bread from home.

A simple piece of Syrian bread can be taken for granted, yet hold such importance in maintaining a connection to our own deep roots. Ever since that visit, you can now find in Shanghai Khubz ‘Adi at the Shanghi Chabad houses.

1) Add sugar to the dissolved yeast mixture, which should be bubbly after standing for about 5 minutes.

2) Sift together the white and whole wheat flour, pastry flour and salt in large mixing bowl. Make a well in the center of the flour mixture and slowly pour in the dissolved yeast mixture. Stir to combine, and knead by hand in the bowl for about a minute until the dough is soft and sticky. Turn out onto a flour-dusted work surface and knead gently for about 3 to 5 minutes until the dough is elastic and no longer sticky to the touch. (You can also use dough hook of a mixer to knead the dough.) Place dough into a clean mixing bowl. Cover the dough with a damp towel. Seal the bowl with plastic wrap and let dough rise in a warm place for about a 1 hour or until it doubles in size.

3) After the dough has risen, divide into quarters and work with one quarter at a time, keeping the rest covered. Divide the first half into 4 fist-size balls. On a flour-covered surface, flatten each ball with a rolling pin or by hand until it is 4 to 6 inches in diameter. Place rounds of dough onto ungreased baking sheets, leaving ample space between them. Repeat with the remaining quarters. Cover each baking sheet with a towel and allow to rise for a minimum of 15 minutes.

5) Bake the rounds for 4 to 5 minutes, monitoring the process closely (loaves transition from done to burnt very rapidly). The heat must be even; otherwise, the bread does not puff properly.

6) Remove loaves and cool on wire racks. Do not stack the loaves while cooling. Serve immediately or wrap tightly and freeze.

Khubz Za’atar — Za’atar Flatbread
Follow the above recipe through step 4. Mix 1 cup of za’atar with 1 cup of extra virgin olive oil in a small mixing bowl. It should be a very thin mixture. Spoon about 1 tablespoon of the za’atar mixture on top of each loaf before step 5. Spread the oil and press down with your fingertips all over the bread, dimpling the top. This will give the loaf a traditional shape, prevent the oil from spilling off the loaves during baking, and keep a pocket from forming.

Khubz Semson — Sesame Flatbread
Again, follow the main bread recipe through step 4. Brush the loaves lightly with water and press each side of dough into a dish of sesame seeds before placing on baking trays. Let rest for 15 minutes and then bake according to step 5.