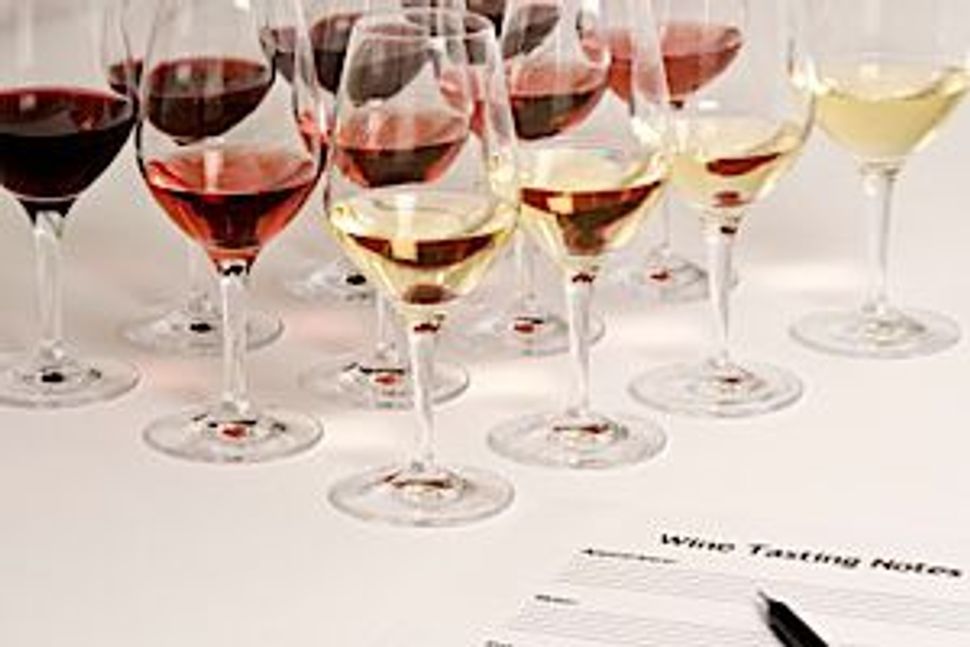 For the small but budding wine community of Israel (and many local revelers), The Israel Wine Festival at the Israel Museum in Jerusalem is the pinnacle event of the year. Friends and celebrities — close to 10,000 of them — mingle outside between the museum’s buildings and trees. Wines from around the country were poured, as guests munch on locally made cheeses from places like Jacob’s Dairy.

The festival, which started on Monday and ends tonight, is in its eighth year and was started by owners of two Jerusalem wine shops, by Avi Ben and Smulik Shahar. The winery lineup consists of 40 Israeli wineries. This year’s newcomers included: Bazelet ha’Golan, Kitron, Ella Valley, Katlav, Gva’ot, Har Bracha, Chillag and others. More established wineries like Carmel and Golan Heights were there as well, as was Tishbi Winery and Binyamina Winery. And some of the boutique Israeli wineries like Tzuba Winery, Odem Mountain Winery and Yatir Winery also made appearances.

When asked which wines Ben he was most excited to taste he commented, “the excitement comes after the tasting — I’m a blank page each year.” As a wine professional, I enjoyed the festival Monday evening with my husband and friends and came away with some delicious discoveries. My forth Israeli wine festival, I cannot say it was better than last year, but it was as enjoyable. I tasted a few surprising wines and wines that have improved from last year. There was also a better food selection this year with, pasta, focaccia, sandwiches, cheese platters and chocolates as well.

Sampling all the varieties served is virtually impossible, as most wineries serve multiple wines. However, six wines sparked an interest in my pallet. Some are exported to the United States, while others are not. But they are more than worth seeking out on your next trip to Israel.

Zion Winery: was founded in 1848 by the Shor Family in the Old City of Jerusalem. Today they produce four million bottles of wine and grape juice a year. While all of their wines are palatable, I was struck by their dry Emerald Riesling, a rare find in Israel. It was crisp and had a nice green apple finish. This wine would be great alone or paired with some fruit and nuts while sitting on the porch on a hot summer’s afternoon. Zion Winery is kosher and exported to the U.S..

Chillag Winery: was established in 1998 by Orna Chillag, one of the four female winemakers in Israel, and the only female owner of a winery in Israel. (She came dressed festively as a Greek goddess to the festival). The winery produces 20,000 bottles annually with grapes from the Upper Galilee that are made into wine in a facility located in the center of Israel. I was impressed with the Solo Cabernet Sauvignon 2007, which has a very attractive smell of black fruits and cassis with a leather and smoky taste. It would pair nicely with lamb or steak. Chillag is not kosher and is not exported.

Kadesh Barnea Winery: is located in the Negev desert and was founded by Alon Tzadok in 2000 and produces 50,000 bottles annually. I was pleasantly surprised with the improvements in the wines from last year to this year. I especially enjoyed their White Desert 2010 which is a blend of Chardonnay, Sauvignon Blanc and Mourvèdre which was oaked in American barrels for 6 months. It had a great almond, nutty flavor with a butterscotch texture. This wine would pair well with meat or fish, and especially with some camembert cheese. Kadesh Barnea is kosher and exported.

Gat Shamron Winery: shocked me with its quality. This winery was established in 2003 by Avigdor Sharon and Lior Nachum near Kfar Saba. They produce only 7,000 bottles annually. Their Cabernet Franc, Gatot semi-sweet red blend, a variety which is often looked down upon in the wine community, was surprisingly delightfully smooth and would be enjoyable with any meal or dessert. The wine I enjoyed most was their ice wine, which is made with frozen grapes. This is a winery to watch. Gat Shamron Winery is kosher, not exported and only sold at the winery.

Tzuba Winery: is located in the Jerusalem Hills and was established in 2005. Tzuba Winery is a boutique winery, producing 40,000 bottles annually but they are expanding and plan to triple their production in the coming years. Metsuda 2007 is a Bordeaux style blend with an elegant, smooth and well balanced wine that has great aging potential. This is a perfect steak wine without a question. Kosher and exported to the USA.

Meisher Winery: was established in 1991 by Ze’ev and Chaya Smilansky and currently produces 10,000 bottles annually. Meisher has been on my radar for a couple of years but it wasn’t until this festival that I really enjoyed their wines. Their Merlot 2007 was divine, well structured, easy to drink now but could age for a couple of more years. It was very fruity and had a hint of strawberry. Meisher is not kosher and is exported.

Esther Cohen, a Boston native who made aliyah, is the CEO of My Israel Wine Tours, a company that has taken over 500 people on 115 wine tours around Israel.